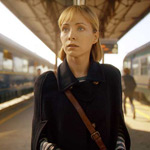 Next week, movie lovers on both coasts will have a chance to get to know animation icon Nancy Cartwright — the voice of Bart on The Simpsons — in a whole new light as her film In Search of Fellini, based on her own real-life adventure in Italy, gets a limited theatrical release. The flick will open Sept. 15-17 at the Laemmle NoHo in Los Angeles, and at the Village East cinema in New York City, with cast and crew Q&As following screenings.

Inspired by Cartwright’s experience travelling to Italy in 1985 to seek out the legendary director Federico Fellini, In Search of Fellini is directed by Taron Lexton and stars Ksenia Solo, Maria Bello and Mary Lynn Rajskub. Cartwright, who originally developed the story as a one-woman performance, wrote the script with Peter Kjenaas and served as executive producer with Kevin Burke, Monika Bacardi and Andrea Iervolino.

Synopsis: A sheltered, small-town Ohio girl is suddenly faced by harsh reality. Desperate for answers, she discovers hope in the delightfully bizarre films of Federico Fellini, and sets off on a strange, beautiful journey across Italy to find him. Along the way she discovers far more than she ever expected.

In Search of Fellini

In Search of Fellini