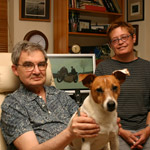 L.A. audiences will finally get a chance to enjoy Paul and Sandra Fierlinger’s well-reviewed animated feature My Dog Tulip this Friday, as the movie begins in run at the Nuart Theater. Based on the acclaimed 1956 memoir by the late British author J.R. Ackerley, the 2D pic tells the poignant tale of the author’s 14-year friendship with his adopted German Shepherd. The 82-minute-long film, which was the official selection at last year’s Toronto International Film Festival and also played at the Ottawa Animation Festival, boasts a stellar voice cast which includes Christopher Plummer as the author, the late Lynn Redgrave as his sister and Isabella Rossellini as a sympathetic vet.

The talented husband-and-wife team have been creating award-winning hand-drawn animations such as the PBS projects Drawn from Memory, Still Life with Animated Dogs and A Room Nearby for the past couple of decades. In a world where it’s common to chase after formulas that will reach the widest audience possible and target the cheapest common denominator, the Fierlingers stand out because of their devotion to personal, eccentric material that speaks to them as artists. 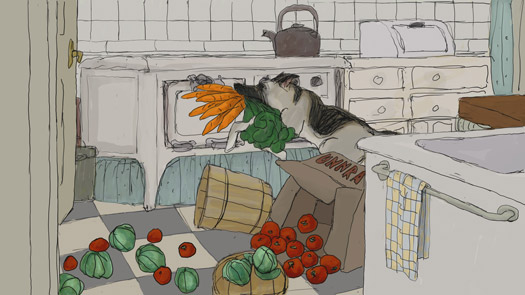 “It’s funny how it all happened,” says Fierlinger during a phone call from the Pennsylvania home he shares with Sandra. “We got a call out of nowhere from producers Howard Norman and Howard Kaminsky, who told us that they wanted to make an animated feature film with us. They said pick a well-known book and they’ll supply the stars to voice the characters! They’d never produced an animated project before, and we were recommended to them by a friend. So we decided to tackle My Dog Tulip because we had animated dogs before. We didn’t want our film to be cutesy like so many other films about dogs are. It’s the kind of movie that people are either going to love or hate!” 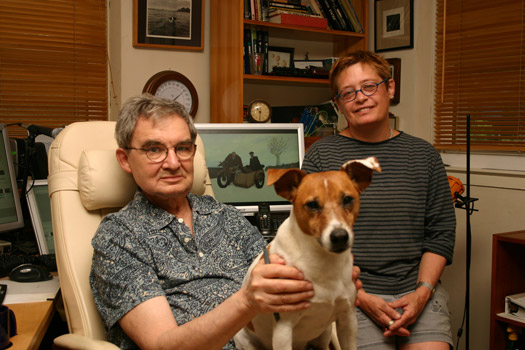 Unlike most feature film animators who work with the major studios, Fierlinger and his wife worked together from their home in a small Philadelphia suburb with an estimated budget of 1.3 million dollars—which included the big salaries of the film’s major stars. “It took us about two and half years to draw and paint and then several months for pre- and post-production,” says the septuagenarian animator. “We put in about 12 to 16 hours every day. We live very hermetic, mundane lives with our two dogs, Gracie and Oscar.”

Fierlinger is quick to point out that their version of Ackerley’s memoir is the polar opposite of a Disney toon. “It’s a very scatological book,” he says. “It’s all about doggie bodily functions and mating. Dogs are all about eating, pooping and humping! Our dog Gracie has enough German Shepherd in her so we were able to base a lot of our drawings on her.”

The way Fierlinger and his wife approach each project is very similar to the way an author works on a book, he says. “You start with scene one and keep drawing until you’re done with the movie. Everything starts to fit in like the first easy pieces of a jigsaw puzzle. But I always get stuck at some point. I paint myself into a corner, because I never look too far ahead. That’s when I call Sandra to the rescue. ‘Look what’s happened,’ I tell her, and she has to help me out of the corner, which she usually does because she approaches the problem with a clean slate!”

The Fierlingers have been using TVPaint technology to create their animated films for the past 12 years. “I hated to work with cels, because they were susceptible to dust scratches and flairs. I experimented with Xerox machines, but didn’t like that either. TVPaint emulates tactile tools, just like brushes and watercolors. Everything you see in Tulip was done with a Wacom tablet, but it looks hand-painted.”

Fierlinger says working with paperless technology has saved him a lot of time. “I draw every second frame which makes 12 original frames for each second of projection time, therefore that’s 12 times 60 or 720 drawings per minute, which totals 58,320 drawings for the 81 minutes length of the movie. It’s safe to say that Sandra had to make about 600 individual background paintings.”

Years before Fierlinger made his animated films for PBS, he established himself as an indie animation producer in Czechosklovakia, working for the acclaimed Kratky Film and creating numerous children’s shorts for film and TV. In the 1970s, he formed AR&T Associates and produced shorts for Sesame Street, including the popular Teeny Little Super Guys series. He even received an Oscar nomination for the short It’s So Nice to Have a Wolf Around the House in 1980. Despite all the work it takes to create one of his animated movies, he says he’s never been happier. “I made my first animated work when I was 12 and started to work professionally in 1958,” he says with a smile. “But now that I’m 73, I even find it more rewarding to work from home, because you don’t want to leave your house. You do what you love to do best: It’s a wonderful way to enjoy old age—I’ve truly never been happier.”

You may also like...
Related Topics:Debuts, Los Angeles, My Dog Tulip