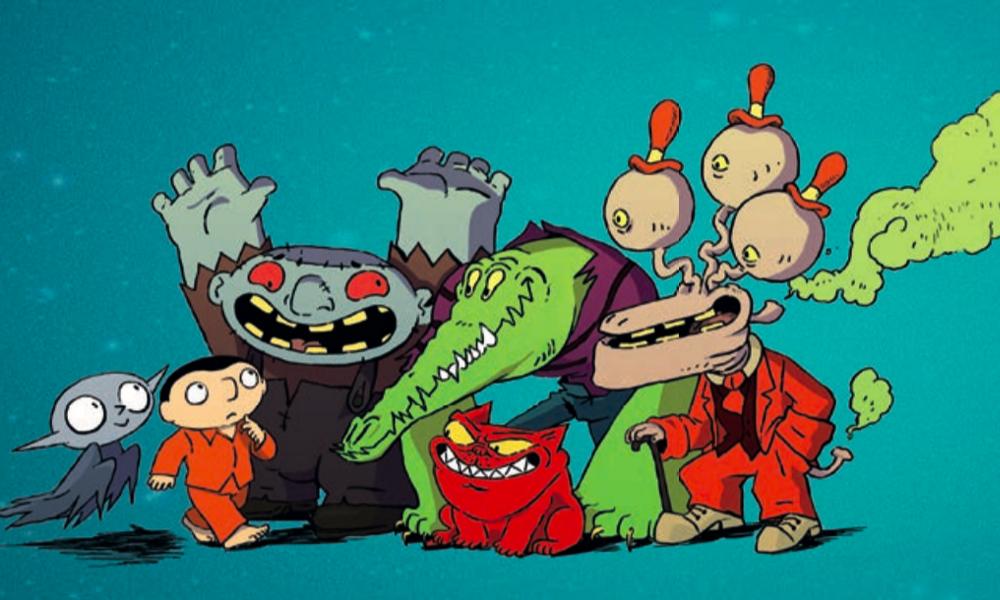 This fall, movie audiences in France will be treated to Little Vampire (Petit Vampire), a new 2D animated movie written and directed by acclaimed graphic novelist Joann Sfar. The prolific French artist, who was behind the award-winning 2011 feature The Rabbi’s Cat, was kind enough to offer us an exclusive interview a few months ahead of the release of the movie. Here is what he told us: 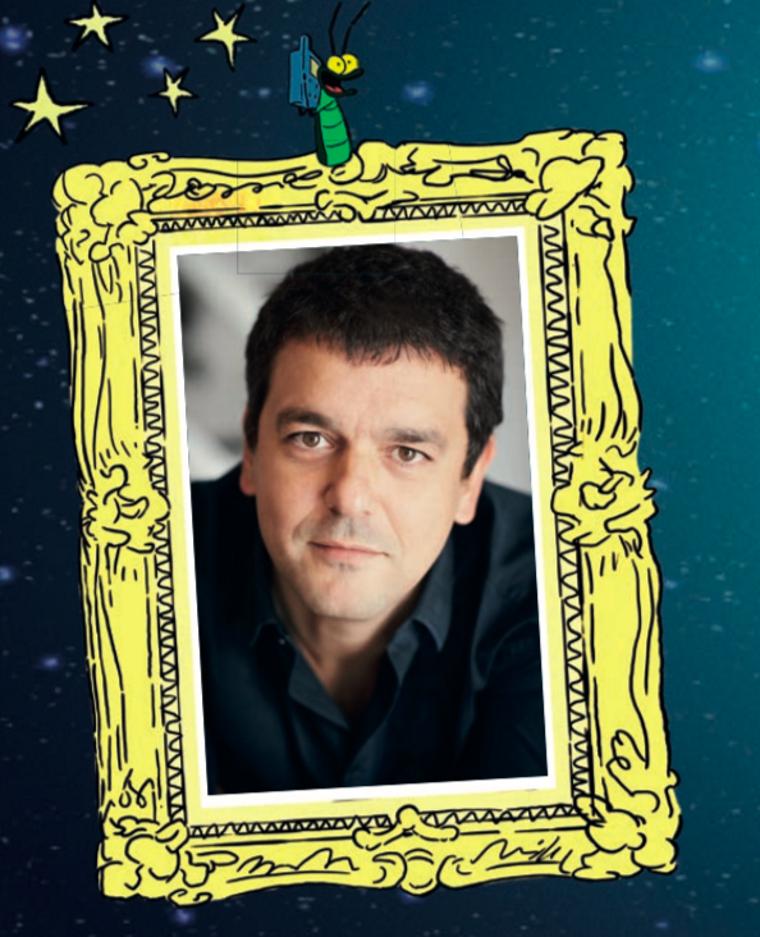 Congratulations on finishing your second 2D animated movie! Can you tell us a little bit about the origins of this character?

Joann Sfar: I’ve been with this character of “Petit Vampire” (Little Vampire) since my kindergarten days. When I was a child, I imagined this character would be my friend, we would play together and he’d do my homework for me. I was crazy about monsters. My grandfather would buy me all these books about movie monsters, especially since I was too young to see them in theaters. I imagined so many things about Nosferatu and Dracula. My imagination was full of these monsters. I would also imagine them in funny everyday stories and drew them. That’s where he came from.

What is the development and production history of the movie?

The Little Vampire has been a comic-book character for more than 25 years. Luckily for me, the graphic novel became a New York Times bestselling book and we sold his stories worldwide. A TV show was made 15 years ago, which was quite funny and creepy, but it didn’t have great animation. So, about 10 years ago, we started to talk about making a CG-animated movie based on the books. An American studio and Guillermo del Toro were also involved. Guillermo has been a great friend. He introduced me to the makeup team for my live-action movie Gainsbourg and was a great help in my movie career. But we weren’t able to raise enough money to make a CG movie on the level of a Pixar or DreamWorks feature. You know, I hate it when European studios do cheap CGI movies. I don’t hate CG, but you need to do it well.

So, we decided to make it in 2D, because Rabbi’s Cat was a success. We wanted to keep a big part of the team that made that movie and also to bring in new animators, young talent from Gobelins school. I have to say, most of them were very happy to work in 2D animation, because most of the other projects today are CGI. We all share the same love for drawing and comic books. 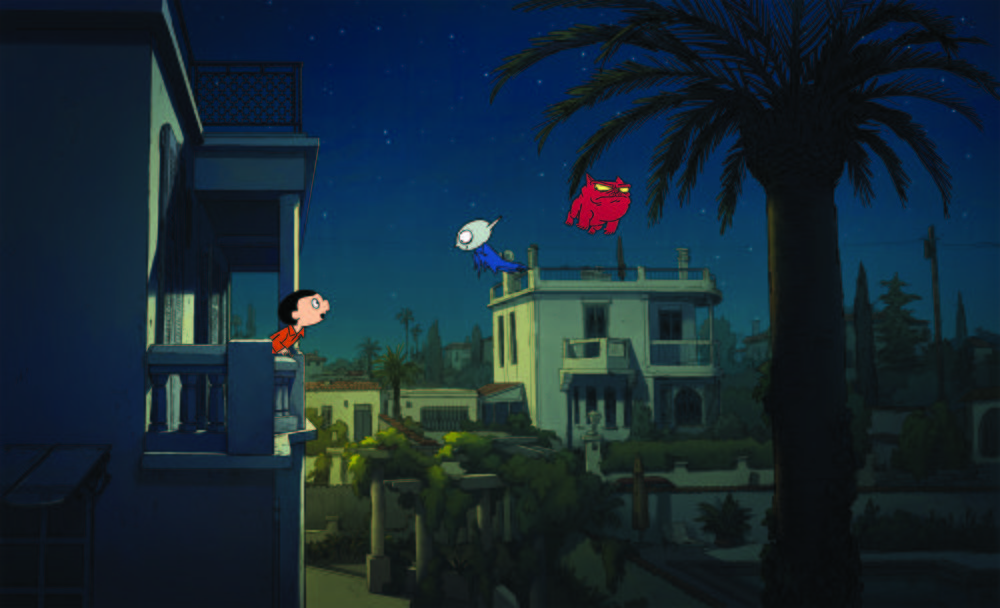 Can you elaborate on the visual style of the movie and your sources of inspiration?

Technically, I am hugely inspired by Miyazaki movies. I like to use real-life locations, visiting them, taking photos and then creating drawings and paintings based on the real-world material. I take the same approach with actors. Before starting the animation, we were shooting our actors dressed as pirates and phantoms, fighting with swords, using ropes to keep them in flight poses. I guess because I’m a graphic artist, I need real life. Live-action movies and graphic novels are simpler. I just look at real life and draw. But animation deals with a different kind of drawing. It’s another universe altogether. During Rabbi’s Cat, I spent a lot of time fighting animation. When you draw for graphic novels, there are more muscles and bones and less movement.

The good thing about the movie was that now I knew what was possible and what wasn’t for Little Vampire. My relationship with the film’s animators was very funny because. for the first time, I accepted when the team told me no. For this movie, we wanted to adapt the source material to have more fun, more movements and more expressions so we have been adapting my characters and adapting the backgrounds and making them more painterly. You can see the huge influence of classic Disney movies like The Jungle Book or The Sword in the Stone. I am a huge fan of Disney art director and animator Ken Anderson. 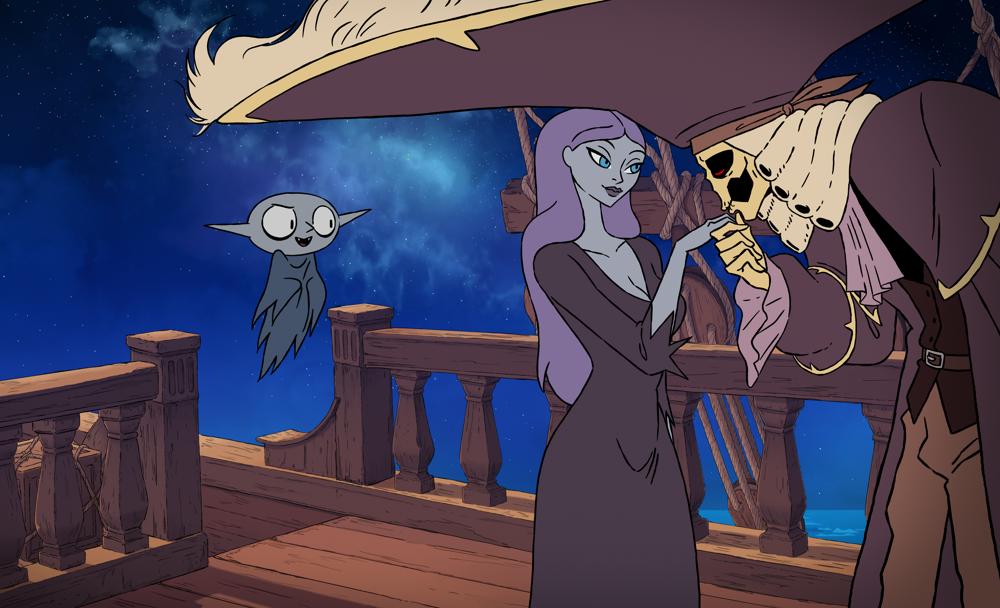 Can you talk about the film’s budget and how you decided to take the 2D route?

I can tell you that we had a lot less money than we did with Rabbi’s Cat (12.5 million euros), but we had more time to make it. Our movie is a love letter to classic animated movies. In the eyes of a child, there is no hierarchy between 2D and CG. I think the two expressions should co-exist. We had less money, but more time. For a young viewer, the budget doesn’t matter. But he or she should love the characters and feel a connection with them. The most important thing is to use the technique properly. Jack Nicholson said that oil paintings deal with oil, and cinema deals with money. If you don’t have the money to do proper CG animation, and you have money to do 2D animation, you should definitely do 2D animation—as the Marvelous Mrs. Maisel says: “Tits up!”

Tell us a little bit about the main characters and themes you explore in the movie.

There are so many characters in children’s books and movies that are fake orphans. Many kids secretly dream about being orphans because they think it would be great not to have their parents tell them what to do. They think of it as having a great destiny, like Harry Potter did. Unfortunately, I was an orphan in real life. I lost my mother before I was even four, so all my life I have been trying to help children deal with the social situations of dealing with that loss. I can’t help with the pain, but orphans don’t want to be pitied or treated differently than other children. Our main character, Michael, is funny, always full of energy and involved with lots of activities. Perhaps he is doing too much because he wants to be accepted. Basically, the movie is about the friendship between a child whose parents are dead and another child whose parents are the living dead! I wanted to make the movie extremely funny. That’s what I love about classic animated movies. They deal with essential, important subjects, but they deal with them in a subtle, funny way. I hope the audience will burst with laughter throughout the movie. 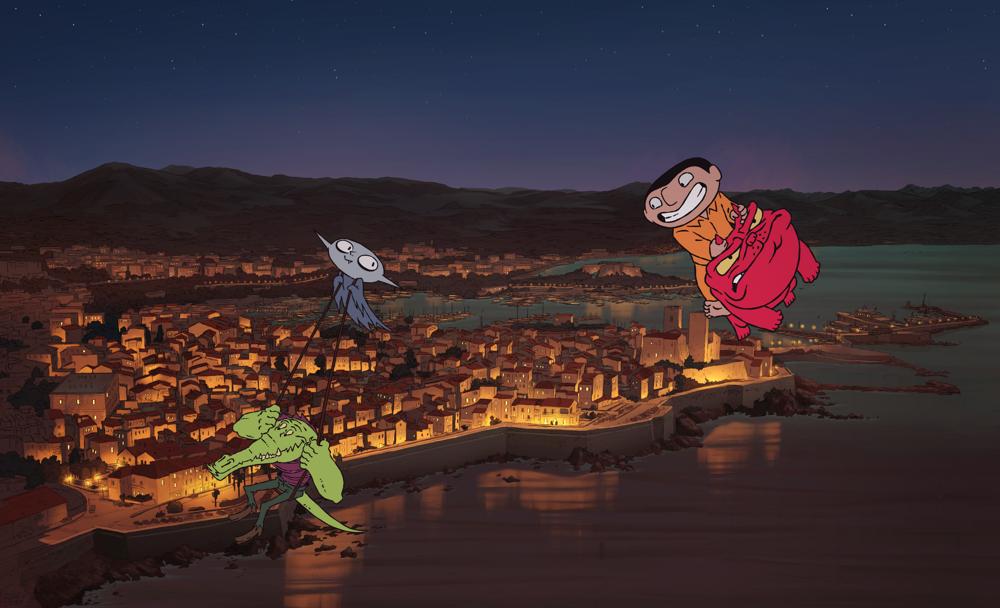 What is the creative process like for you, since you navigate between the worlds of live action and animation quite easily?

Making this movie wasn’t that different from my other animated movie and live-action movies. I wrote the story and did the storyboards. Then I recorded the voices for the whole movie to get good timing. Then, we moved to the animation. The most challenging part was how long it took us to make it: It has been six years of production. At times, I thought we would never be able to finish and distribute the movie. That is hell for me, because it usually takes me about two or three months to do my comic books. Sometimes, I felt like I was navigating the Titanic, and I was trying my best not to sink the ship!

Did the whole COVID-19 pandemic situation in France slow down the production at all?

We were lucky because the movie was almost finished when the pandemic happened. The only sadness was not being able to take the movie and show it at festivals around the world. You know, my regular life is not that different from being in quarantine. It’s pretty much about staying home and drawing 12 hours a day. We are so well-connected with the team via computers that everyone was able to work from home. Animation may be one of the few industries that wasn’t impacted much by COVID at all. 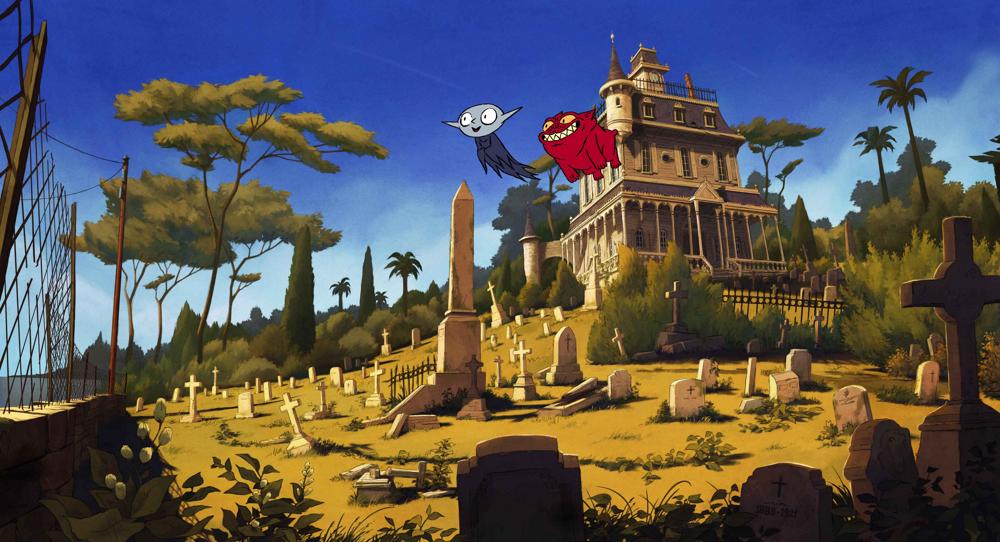 Can you talk about your visual style and animation influences?

Ever since I was a child, I watched a lot of animation, so I tried to reflect all my influences in my movies. One of the interesting things about Vampire is the different styles we used. There is a lot of inspiration from the works of artists like Matsumuto Reiji, Charles M. Schulz, Sempé, Ronald Searle and others. I love classic Disney movies. I am also a huge fan of Bruce Timm and Paul Dini. I love everyone who can draw!

What do you think of the state of animation worldwide?

I think it’s a good time for animation worldwide: There are so many openings and opportunities for all kinds of audiences. I am a big Rick and Morty fan. If you can shock me with animation, I am grateful. I think animation can and should deal with every subject. What terrifies me is censorship, when people take scenes out of an animated movie or entire episodes from series because they think it may offend some people. I think we are smart and we can deal with some things that we don’t want to hear or watch. I don’t want a network to choose for me what I’m able to watch and what I can’t. I don’t want someone to read my books before I open them. It reminds of how I wasn’t allowed to see horror movies when I was a kid. My grandfather took me to see this movie called Shock Waves, which was about Nazi zombies. I was only eight years old and never quite recovered from it!

One last question: What do you hope audiences take away from your movie?

Written and directed by Joann Sfar, Petit Vampire is slated for a theatrical release in France on Oct. 21. The film is produced by Joann Sfar’s Magical Society and co-produced by StudioCanal, Panache Production, Story, La Compagnie Cinematographique, France 3 Cinema and RTBF. 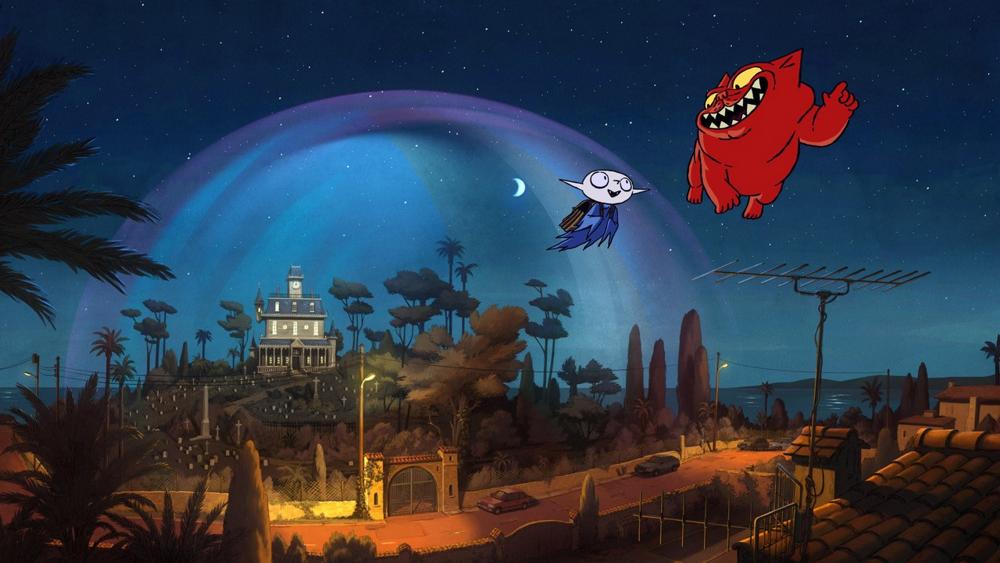