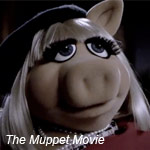 Makers of the new Muppet Movie, we salute you! Disney has introduced a new killer trailer for its holiday feature The Muppet Movie, which is bound to put a a few laughs into your day. This week’s hot clip is a spot-on parody of the brooding The Girl with the Dragon Tattoo trailer, which raised eyebrows a few months ago. The spoof features brief glances at the cameo cast (Sarah Silverman, Neil Patrick Harris—is he in everything we like?) and Rico Rodriguez from Modern Family. You’ve got to love the clever touches, including the titles sequence which apologizes for not getting the rights to the real song, “so we had some dude write this one.” Previous trailers parodied The Hangover and The Green Lantern.

Here’s The Pig with the Froggy Tattoo:

You may also like...
Related Topics:Muppets, Neil Patrick Harris, Rico Rodriguez, Sarah Silverman, The Girl with the Dragon Tattoo, The Green Lantern, The Hangover, The Muppet Movie, The Pig with the Froggy Tattoo