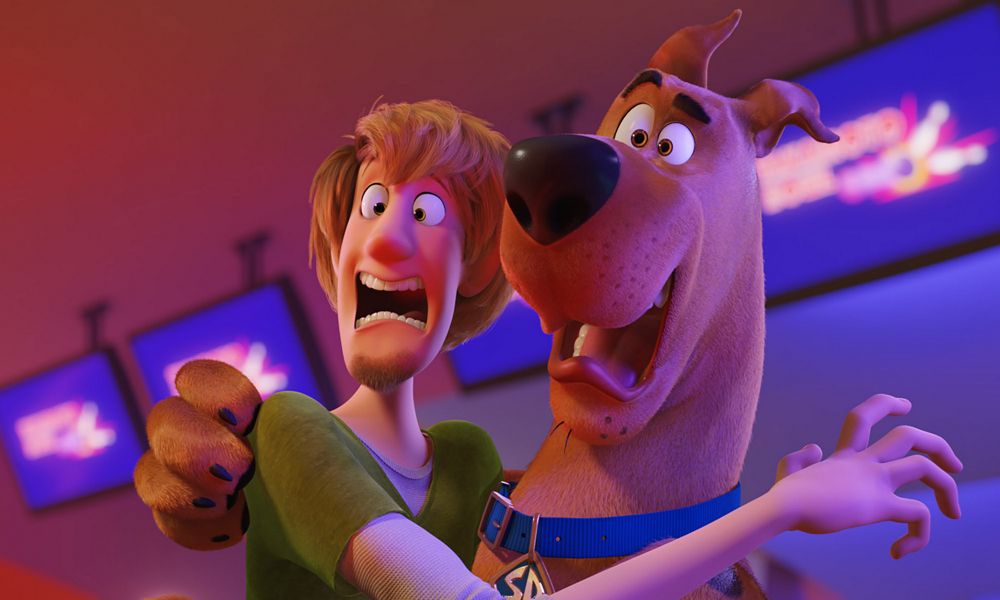 Director Tony Cervone makes no bones about the latest iteration of animation’s venerable, lovable Great Dane, Scooby-Doo. “This is an opportunity to animate Scooby and Shaggy and the gang, and these other Hanna-Barbera characters, the way they could have been,” he says of his new animated feature Scoob! “I can honestly say this is the greatest Scooby-Doo animation.”

Cervone, who is a specialist in the classic Looney Tunes and Hanna-Barbera characters, recently led a group of select journalists and bloggers through the Warner Animation Group headquarters in Burbank for a sneak-peak of the digitally animated film. Scoob! offers the backstory of Scooby-Doo and Mystery Inc. before launching them into a sci-fi adventure in which they battle a reimagined version of Dick Dastardly and Muttley. A reconfiguration of the Blue Falcon ─ here presented as Shaggy’s boyhood hero, but with a modern twist ─ and Dynomutt are also key elements of the plot. Even Captain Caveman shows up.

Based on the clips presented at WAG, the boast that Scoob! represents the acme (so to speak) of Scooby-Doo tooning is not an idle one. Working with Dallas/Montreal-based Reel FX Animation, Cervone and his crew retained the characters’ cartooniness through the textured 3D. And having contributed to various installments of the franchise for one-quarter of its half-century existence ─ the last five years for this movie alone ─ Cervone is a man who knows his Doo. He cites a personal connection with Scooby and the gang reaching back before his professional career. “I grew up in Chicago and learned about L.A. from Scooby-Doo,” he states. “I never knew what a burrito was; I learned from Scooby-Doo!”

SoCal culture is a major element of the film. “The way Spider-Man: Into the Spider-Verse was set in New York, this movie is clearly set in Los Angeles,” says Cervone. That includes reproducing recognizable neighborhoods, notably Venice Beach, which is where a young, lonely Norville “Shaggy” Rogers first encounters the stray, streetwise, nameless pup who will become his BFF. The Venice establishing shot even features a cameo by “The Kama Kosmic Krusader,” the turbaned, roller-skating balladeer who has been a fixture of the Venice boardwalk for decades. Cervone and producer Pam Coats point out the film is loaded with such cultural and animation-related Easter eggs ─ including a gyudon restaurant called “Takamoto Bowl,” named for Scooby’s original designer Iwao Takamoto. “There’s not an accidental street sign in this movie,” declares Coats.

More than that, Scoob! presents the denizens of the Mystery Machine (which was on-hand as part of the press event for photo ops) as real people with real personalities and emotions, which sometimes result in real conflicts. “We tried to keep everyone’s personality at their core characters, but then try to find a way to go deeper,” Cervone says. “When the stuff gets real and emotional with Shaggy, he can make you cry.”