Despite lower expectations, Fox’s Rise of the Planet of the Apes managed to bring in close to $54 million this past weekend, thanks to positive reviews and good word of mouth. The prequel also made a cool $23.4 million in 25 territories overseas. Directed by Rupert Wyatt, Rise of the Apes has been praised for its top-of-the-line digital effects and performance capture apes. Andy Serkis portrays the ape Caesar, and is the movie’s lead character, while James Franco, Frida Pinto and John Lithgow round up the cast. 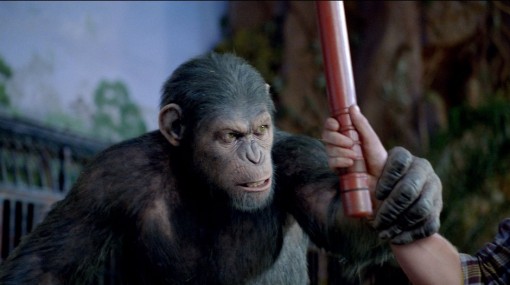 Sony’s big hit The Smurfs continued to show their blue muscle at the box office with an estimated $21 million at No. 2, bringing their domestic total to $76.2 million. The 3-D movie also made $45.2 million from 30 territories, and brought its worldwide cume to $128.9 million.

The weekend’s other new movie, the R-rated body-switching comedy The Change-Up grossed a disappointing $13.5 million at No. 4.

By the way, animation fans will have to wait until November 4 for the next big title –which happens to be DreamWorks Animation’s Puss in Boots—to appear in theaters.