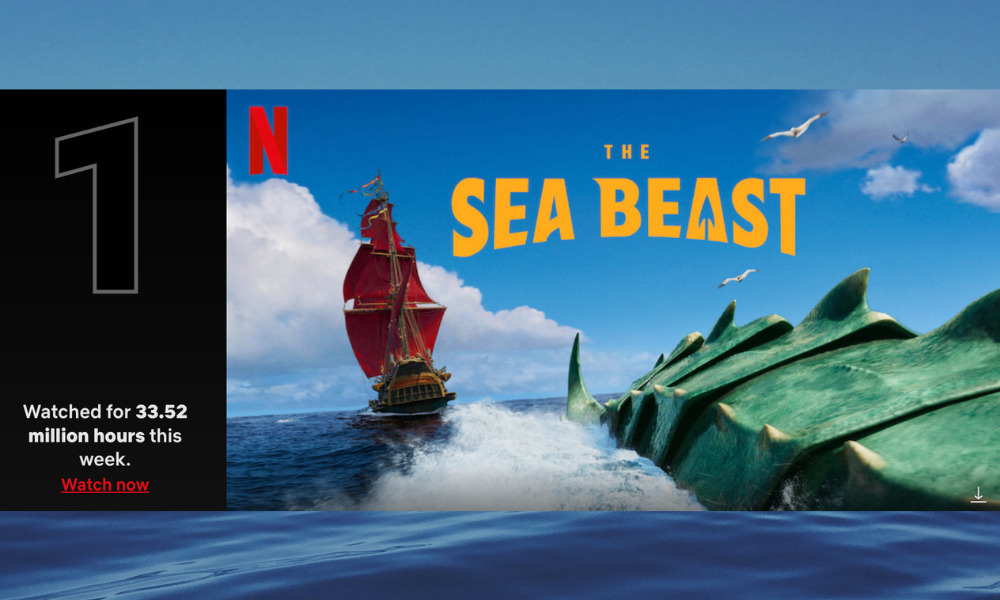 In this week’s Netflix Top 10 report covering July 4-10,  original animated family feature The Sea Beast took viewers on an epic journey with Maisie and Jacob, debuting at No. 1 on the English Films List with 33.52 millions hours viewed. From Academy Award-winning filmmaker Chris Williams (Moana, Big Hero Six, Bolt), the animated film was in the Top 10 in 92 countries. This stellar streaming performance followed glowing reviews and a 94% Rotten Tomatoes score.

Another animated family hit, Sing 2, came in at No. 4 on the same list, down from No. 2 the previous week. For Non-English Films, Tadeo Jones 2 (Tad, the Lost Explorer 2) climbed from No. 9 to No. 3. For TV shows, fans did a lot of rewatching of their fave VFX-fueled series in anticipation of new seasons, with Stranger Things and The Umbrella Academy dominating the English-language list, and anime series BASTARD!! -Heavy Metal, Dark Fantasy- S1 held on to No. 8 on the Non-English list. See more at top10.netflix.com. 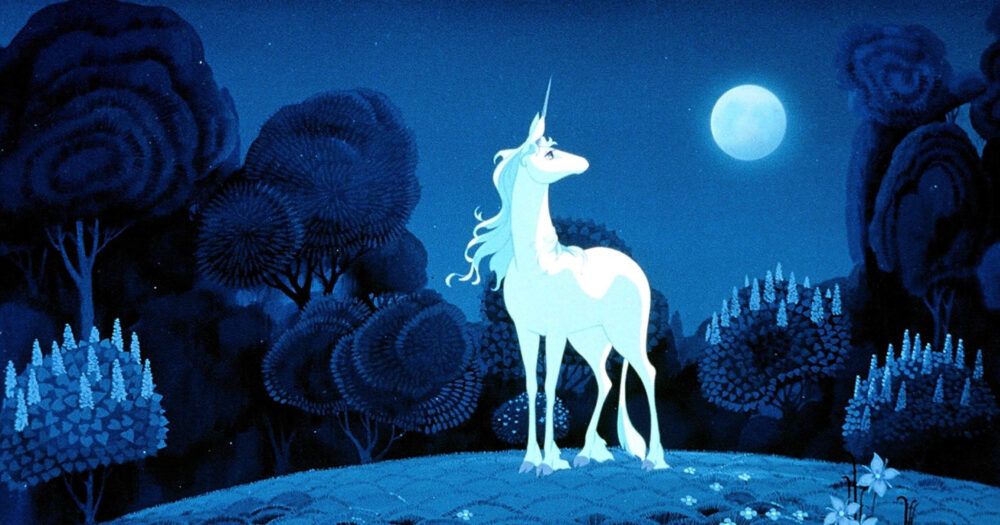 The Academy Museum of Motion Pictures will present a screening of beloved 1982 animated feature The Last Unicorn in honor of the film’s 40th anniversary on July 30 at at 3 p.m., in its David Geffen Theater. The event will feature an in-person Q&A with screenwriter/author Peter S. Beagle and producer Michael Chase Walker.

On discovering that she may well be the last of her immortal kind, the Unicorn sets out on a long journey to discover what may have become of the other unicorns. On the way, she encounters a genuinely wicked witch and a village with a shameful secret. She also befriends a bumbling wizard and a bitter, disillusioned outlaw named Molly Grue, meets the mad King Haggard, and, at the last, must challenge the terrible Red Bull she so deeply fears to face.

Produced and directed by Arthur Rankin, Jr. and Jules Bass of the iconic Rankin-Bass studio and animated by some of the same team that would go on to work with Hayao Miyazaki at Studio Ghibli, The Last Unicorn eatures the voice talents of Mia Farrow, Academy Award winners Alan Arkin and Jeff Bridges, Angela Lansbury and Christopher Lee.

Tickets for The Last Unicorn at the Academy Museum are available here. The venue is also presenting an accommodative screening of the acclaimed animated feature The Red Turtle, by Oscar winner Michaël Dudok De Wit (Father and Daughter), for its family matinee the same day (tickets here).

This summer, Shout! Kids invites families to embark on the thrilling adventures of one of literature’s biggest heroes when the new movie Gulliver Returns  comes to digital download on July 26 and lands on national home entertainment shelves on August 9. Shout! Factory will be donating a portion of the net proceeds earned from the distribution of the movie from year one to World Central Kitchen, a non-profit organization that provides fresh meals in response to crises, which is currently active in Ukraine and surrounding countries providing meals for as many people as possible at border crossings, shelters and other locations.

Inspired by both Jonathan Swift’s timeless tale and an original idea from Ukrainian President Volodymyr Zelensky, Gulliver Returns is a production of Gulliver Films and 95 Animation Studio in Ukraine. The English-language movie is directed by Ilya Maksimov (Dobrinya and the Dragon) with Tony Bonilla (Encanto, Moana) as animation director. The DVD features an exciting movie presentation and is available for pre-order now at ShoutFactory.com. 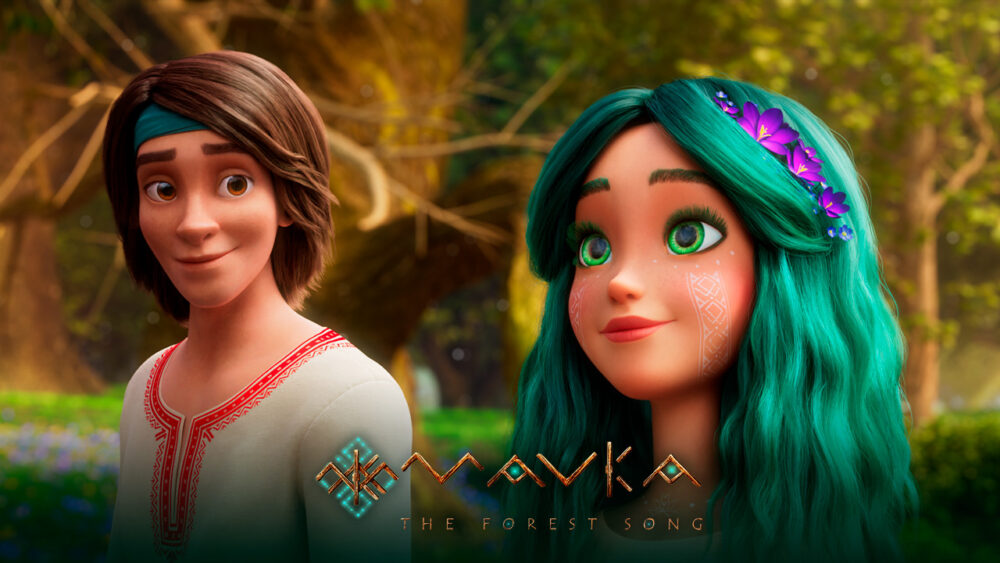 In other Ukraine-related news, Animagrad‘s (FILM.UA Group) eagerly awaited animated ode to Ukrainian culture and artistry, Mavka. The Forest Song, has been picked up by Universal Pictures Content Group with all French distribution rights to the feature. The movie will receive an all-new French-language dub for the release.

Mavka. The Forest Song showcases unique Ukrainian culture, values, traditions and has an environmental component in the partnership with WWF-Ukraine. Mavka is a unique female character from Ukrainian legends and myths, the Soul of the Forest, who becomes its Guardian when her home is in danger. She strives for peace and harmony in her world — just as the people of Ukraine today strive for their own.

As FILM.UA Distribution CEO Evgeniy Drachov points out, Mavka has already presold in more than 20 territories, including Italy, Spain, Portugal, Poland, Bulgaria, Hungary, Romania, Greece, Norway, Denmark, Ireland, Sweden, Finland and MENA countries. Despite the war of Russian aggression, the film is on track for delivery in Q4 2022. 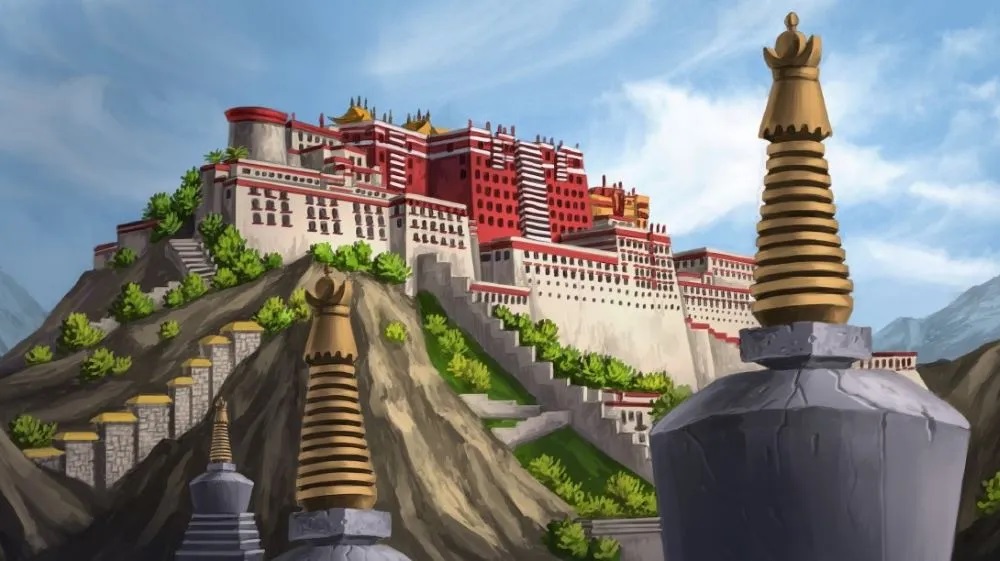 Land of Mercy is written, directed and produceed by Tan Keng Leck, head of Singapore-based Hwallywood Studio, and adpated from the novel by Fan Wen. MSV (Battle of Surabaya) in Indonesia is co-producing and handling the animation production. The film is slated for delivery in October 2023; sales agent / distribtor(s) TBA. 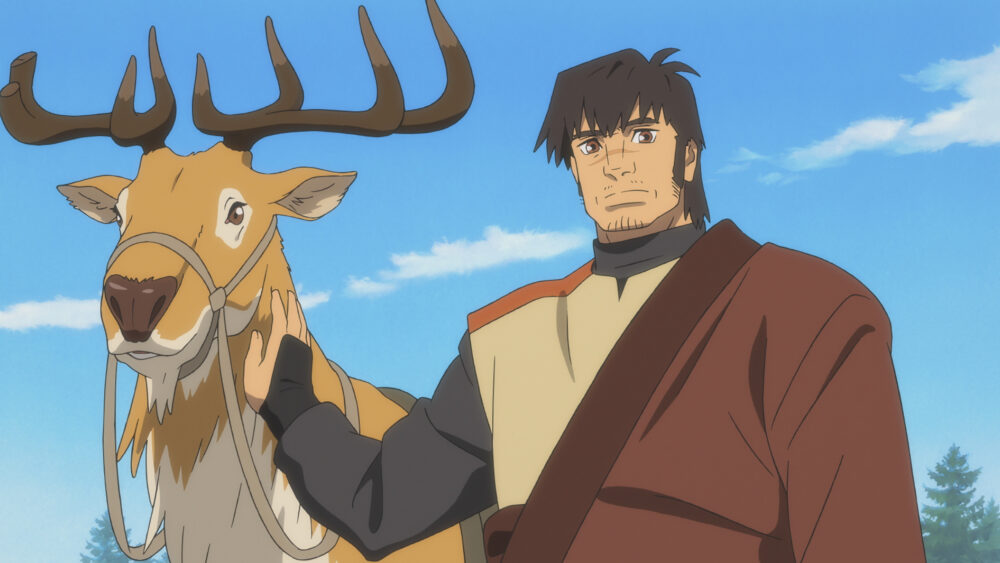 The distributor also announced new engagements for another compelling Japanese animated feature, The Deer King, which opens nationswide on July 15.  In additoin to the previously announced theaters, the movie will screen at: