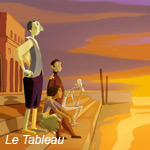 An appraising look at Jean-François Laguionie’s latest work of art, The Painting.

From this side of the Atlantic, it can be easy to lose sight of the fact that feature animated projects need not revolve around spunky princesses, spunky sass-talking animals or courageous yet irreverent super-heroes. Luckily, the creative capitals of Europe can always be relied upon to generate inventive, artisanal films to reignite the flame of your animated passion—and the latest from toon auteur Jean-François Laguionie is no exception.

Set within the universe of an artist’s atelier in the first half of the 20th century, The Painting (Le Tableau in French) centers on the figures in an unfinished painting, separated into three castes: the completed Alldunns who claim superiority, the incomplete Halfies and rough charcoal Sketchies. In a Romeo-and-Juliet twist, an Alldunn named Ramo (voiced by Adrian Larmande) falls for a Claire (Chloe Berthier), a Halfie, and they join up with the young, inquisitive Lola (Jessica Monceau) to seek out their Painter and find out why he created the divided races. Their search takes them beyond the edges of the canvas, into the strange frontiers of the artist’s studio.

A co-production of France’s Blue Spirit and Belgium’s Be-Films, and penned by Laguionie and Anik Le Ray (Eleanor’s Secret), The Painting is a graphically ambitious and narratively compelling exploration of tolerance and repression. Blue Spirit’s team in Angoulême handled the compelling CG animation with sister studio Sinematik in Bruxelles. While The Painting is Laguionie’s fourth animated feature outing (he also directed The Island of Black Mór, A Monkey’s Tale and Gwen, a Book of Sand), it was the first full-length film attempt by the studio. And their efforts certainly paid off: Since its theatrical premiere in France last November, The Painting has garnered immense critical praise and was even nominated for the animated film 2012 César Award. And later this year, thanks to New York distributor GKids, American audiences will also be able to jump into the film’s painterly landscape. 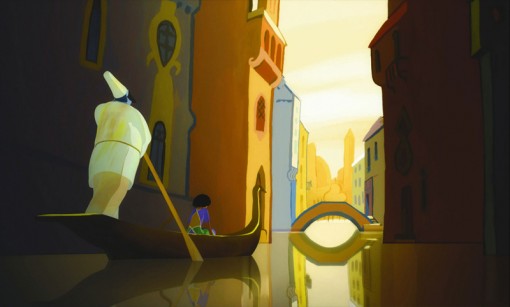 The foundations of The Painting began to take shape several years ago, when writer Le Ray was inspired to craft a story about the relationship between a painter and his model, Laguionie explains.

“Later, a kind of political fable—that of the Alldunns, Halfies and Sketchis—was added to the theme. The richness of the film is perhaps the interpretation of these two ideas.”

The director and screenwriter previously collaborated on 2004’s 2D pirate adventure The Island of Black Mór, and with the way the story of The Painting evolved, it is clear that this was the kind of fantastical journey that could only be done justice to in animation.

As Armelle Glorennec, who produced the film with Éric Jacquot, explains, it took a lot of trial and error to bring this painted world to life: 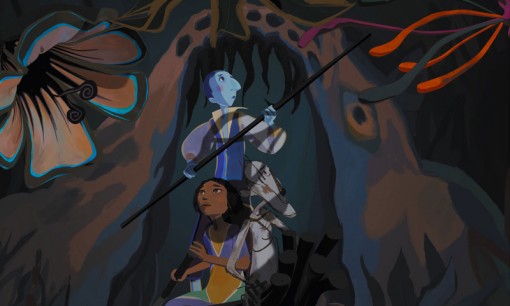 “After doing many tests… and because our studio’s specialty is 3D, and because we wanted to do the work in France and Belgium (and in our studios), we preferred the 3D animation rather than 2D.”

The result of Blue Spirit’s efforts is an interesting blend of the graphic, colorful “flat” CG of the canvas world and the digitally crafted photorealism of the artist’s studio—which in turn is full of pieces paying homage to Chagall, Modigliani, Picasso and Matisse. Above all, Laguionie encouraged the artists to attain a subtlety that would preserve the power of the story.

“In my opinion, the animation must not draw attention to itself,” he explains. “If it’s too spectacular, it destroys the poetic quality of the film. Along with the lead animator, Lionel Chauvin, we strove to reduce the movement of the camera, in order to deliver the ‘theatrical’ quality we were looking for. Ultimately, we wanted to imitate the look of an oil painting, through the use of digital software—and the talents of the film’s artistic team. It wasn’t easy. I hope we have succeeded.”

Over the two-year financing stage, Laguionie personally designed each of the characters by hand and embarked on an intensive storyboarding process. The artist created more than 2,000 large-scale drawings, which he then photographed in a manner of denoting close up or wide shots of each scene. These were then uploaded to a computer where Laguionie timed each scene and recorded dialogue over the digital boards. 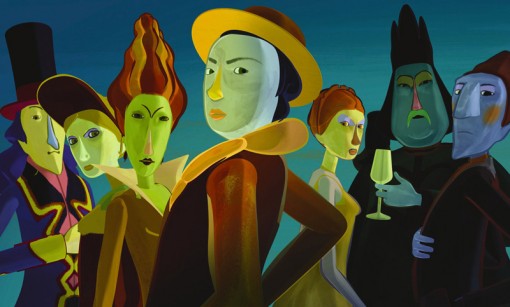 For Glorennec and the Blue Spirit team, choosing such a distinct effect for their first feature effort proved challenging, but she says the artists in Angoulême and Bruxelles were invigorated by each trial along the way.

“There was no particularly tough aspect in this production. In fact, throughout the production, the technical and artistic demands challenged each other, raising questions and providing solutions in a back-and-forth process that would push the movie forward,” says the producer. “It worked like a living matter, in that each aspect of the production was fueling the others with new ideas and possibilities. It was really thrilling!”

Glorennec credits the special chemistry and ease of communication between Laguionie and the creative teams with turning the animation obstacles into surmountable challenges.

In the end result, the animation team was able to model each character in CG before layering on the painted effect, creating graphic beings who could leap out of the 2D world of their canvas and move in a three dimensional space. 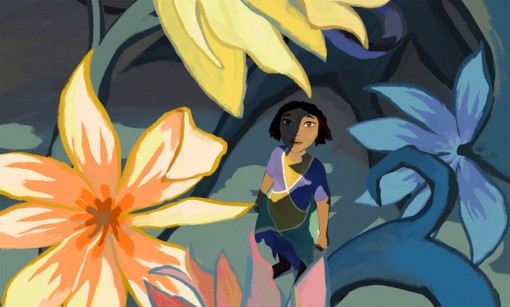 The director, whose previous features employed more traditional methods, notes that new technologies helped not only with achieving the film’s particular aesthetics, but with the entire production flow.

“The technology utilized for this film is much more advanced … It allowed me to delegate more management to the teams and for me to concentrate more on the staging, editing and post production. Indeed, I believe that animation is a truly collaborative creation.”

All in all, after several years of development, The Painting came together over roughly 15 months of pre-production and a year of production—all on a budget of about 4 million euros (about $5.3 million).

For Glorennec, the resulting film—and the positive critical and audience response—is a tour de force, and the producer is rightly proud of crafting such a unique, beautiful world for a first full-length project. 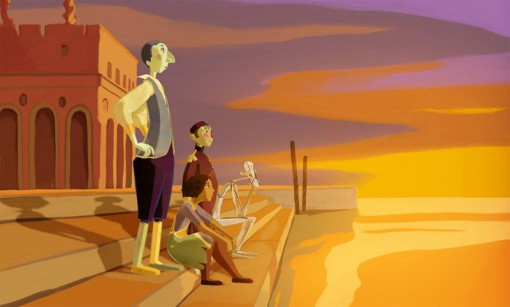 “Anik [Le Ray] and I do not have the pretention to deliver a ‘message,’” Laguionie demurs when asked how he hopes his film affects those lucky enough to catch a U.S. screening, “But the film addresses everyone—children, adults—and speaks about tolerance and freedom. It speaks also of creation, in the larger sense of the word, and its resulting liability. It’s possible to find different issues and themes in the movie, depending on your own point of view.”

In the words of a critic from The Painting’s era of inspiration: I don’t know much about art, but I know what I like.

The Painting had its international premiere at the N.Y. Int’l Children’s Film Festival in March. GKids will handle U.S. theatrical releasing. Visit www.gkids.com for more information.

Korra: The Next Airbender!
Digital District, Aveillan Give Grand Life to Cartier Spot