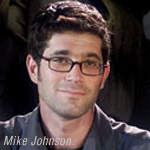 “Mike Johnson is a spectacular director and one of the masters of stop-motion,” says John Williams, president and CEO of Vanguard. “We all think  Oz Wars is a wildly original and commercial project that will thrill and astonish audiences.  Additionally, due to revolutionary new stop-motion software, Mike will be making this world-class quality film at an unprecedentedly economical cost point.”

Reynolds to Write, Franck to Direct Sony-Gotham Group Feature
Question for the Week of December 15 2010