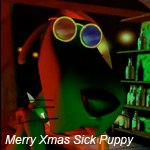 The half-hour special—which was written, directed, animated (in 3ds Max) and voiced by Rolls over the course of a year and released in 2008—has previously appeared on the SyFy channel and been broadcast in the U.K., Australia and Japan.

You can watch Sick Puppy in full at www.youtube.com/sickpuppythemovie or catch it right here: