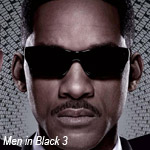 It took a vintage comic book movie franchise to topple the Avengers from its box office throne.

Men in Black 3 — arriving a decade after the previous film in the series and originally adapted from an indie comic book for its 1997 movie debut — topped the weekend with a strong $70 million domestic debut over the three-day Memorial Day weekend. The Sony threequel also took in an estimated $133 million overseas for a strong debut of just over $200 million.

Disney-owned Marvel’s box office juggernaut, Avengers, slid from the top spot for the first time since its May 2 release, earning an estimated $47 million over the holiday weekend. That brings its domestic total to $523 million. Its overseas total of $781 million brings the movie’s worldwide total to $1.3 billion.

Universal’s Battleship held on to third place with an estimated $14 million weekend. The toy adaptation has grossed $47 million domestic and $232 million overseas for a $280 million tally.

The only major-studio animated film currently in release, The Pirates! Band of Misfits, made an estimated $1.5 million this weekend, its sixth. The Aardman-produced and Sony-distributed film has earned about $27 million domestic and $74 million overseas for a $102 million worldwide gross.

Next weekend sees the limited release of the Oscar-nominated animated feature A Cat in Paris, with the following weekend bringing DreamWorks Animation’s Madagascar 3 and Ridley Scott’s sci-fi spectacle Prometheus.