It’s a scene we’ve all been part of – on one end or the other. A child is hypnotized by a favorite cartoon show running on TV and the parent is desperately trying to engage the child in a conversation about important family business. In the case of the new Pixar short, Sanjay’s Super Team, a Hindu boy only has eyes for his favorite Saturday morning show while his father is pained that the boy won’t join him in his morning prayers.

But the short – attached to The Good Dinosaur – uses this set up to take us on a deeply biographical journey with director Sanjay Patel, a veteran Pixar artist of films like Toy Story 2, The Incredibles and Monsters, Inc., who says his own father was frustrated by his son’s focus on American culture and cartoons like Transformers, Looney Tunes and Superman comics.

“I think I was embarrassed, at times, to be different from my American friends, and I didn’t understand then that what makes you different makes you special, gives you a special perspective on things,” says Patel at a screening of his short film at Pixar in Emeryville, Calif.

Patel grew up in San Bernardino, Calif., where his parents owned and operated the Lido Motel, an old Route 66 stopover for travelers. When he lived there, he struggled with being part of a family that had a different history than any of his other classmates. Just the same, Patel is quick to acknowledge that drawing inspiration from traditional Hindu characters was how his career in animation began in many respects. Though he started with graphic novels before working on films, those ancient influences were always with him. And that’s what makes this project so special to him.

The little boy in Patel’s short comes to see three Hindu deities – the goddess of power and protection Durga, the blue-toned Vishnu and the monkey-like Hanuman –  as powerful and helpful as any of the Western superheroes he worships. They even become a kind of team that shows him how to fight his own fears.

Patel also made a crucial decision when enlisting a composer for his project. He worked with Mychael Danna (Life of Pi) who had a tremendous amount of background and feeling for the work Patel was doing on the project. Danna added touches like the sound of a bansuri, an Asian flute that is considered a spiritual instrument associated with Vishnu. “I knew my father would be proud of that choice because it was something that only someone who understood our culture would know.”

More than anything, Patel believes this project takes him full circle and right back to his beginnings with his parents. Whatever rifts there were in the past, he senses his father’s deep pride in his son’s achievements now. “This film helped me understand my father and my father’s culture and also brought us closer to one another,” says Patel. “It’s like discovering the superheroes you were looking for were always there and they were part of your parents’ past, too.” 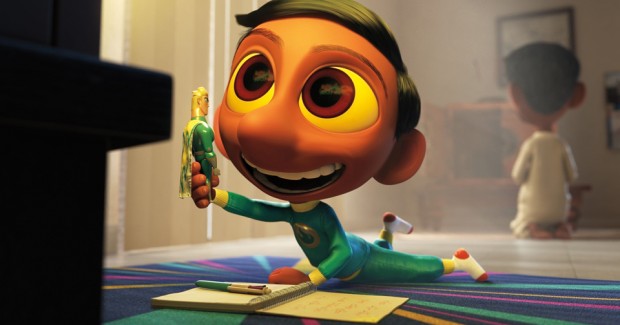