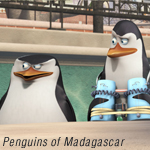 The Penguins of Madagascar, having found success as a small-screen spinoff from DreamWorks Animation’s Madagascar film series, is looking to complete the circle and head back to the big screen in their own solo picture, according to The Hollywood Reporter.

The trade reports that the studio has tapped Megamind writing duo Alan J. Schoolcraft and Brent Simons to do the script for the film.

The penguins were a hit in the first Madagascar film, spawning a short film on the original’s Blu-ray release. The TV series is now airing its second season on Nickelodeon.

A third Madagascar feature is in the works for release next year.