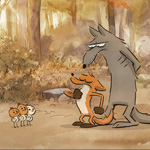 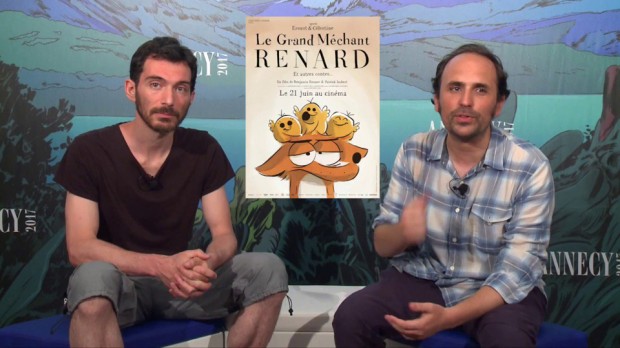 Five years ago, Benjamin Renner charmed audiences and earned an Oscar nomination for Ernest & Celestine, the tale of an unlikely friendship between a strong-willed artistic mouse and a lazy bear with a pronounced sweet tooth.

Renner’s new hand-drawn film The Big Bad Fox and Other Tales (Le Grand Méchant Renard et autres contes), which he co-directed with Patrick Imbert, offers similarly minimal imagery, but broader slapstick comedy. The three fables that make up the 80-minute film are presented by a troop of animal actors who perform with more enthusiasm than skill. Although the animation is fluid and the film never feels like the artists cut corners, Big Bad Fox was made for an astonishing €2.5 million — just under $3 million, less than some half-hour TV episodes here.

The feature, which was produced by Folivari, the Paris-based studio founded by veteran French producer Didier Brunner (The Triplets of Belleville, Ernest & Celestine, Kirikou movies), has grossed over $4.9 million in France and several other countries since it began its run last June.

At the center of the stories is Pig, a hard-working, long-suffering farmer who must endure the assistance of his well-intended but thick-witted friends, Rabbit and Duck. Renner says the characters “never really had names, although in my head they are all called ‘Henry.’ Only the three chicks have names: they have the names of my nephews and nieces, because they are my nephews and nieces.”

In the title tale, the inept Fox steals the eggs of one of Pig’s hens, hoping they’ll grow up to become a meal. (He usually has nothing to eat but turnips from Pig’s garden.) But when the three chicks hatch, they imprint on Fox as their mother and shower him with the only affection he’s ever received. What’s a Fox to do—especially when the meaner, smarter Wolf is monitoring his actions?

The idea for the story had been gestating a long time: As a boy, Renner visited family friends who had a farm near Montauban in Southern France. “Once, I was sitting by an incubator and the chicks were about to hatch,” he recalls. “My father told me, ‘If you stay here, the chickens will see you when they hatch. They’ll think you’re their mother and you will have to take care of them.’ I went away immediately, because I was too scared to be a single mom at six.”

The idea that chicks might regard him or some other inappropriate creature as their mother puzzled Renner. “For years, I wondered how can this happen,” he continues. “What if they see a dog or a fox? When I was a teenager, I started to make some drawings about the fox with the chickens. I always told myself, I will tell this story some day. After I finished Ernest & Celestine, I was so tired I said, ‘Okay maybe it’s time to tell this story; maybe I can do it right now’.”

He turned the story into a graphic novel, then adapted it to the screen. The other two tales — A Baby to Deliver (Un bébé à livrer), which is based on another comic by Renner, and The Perfect Christmas (Le Noël parfait) — were directed by Patrick Imbert. In the former, complications arise after a lazy stork cons Pig, Rabbit and Duck into taking a baby to her proper home. When they break a plastic decoration on Pig’s barn, Rabbit and Duck think they’ve killed Santa Claus and insist Pig join them in delivering toys his place. Needless to say, complications arise.

Imbert and Renner had become friends with while they were working on Ernest & Celestine. “I was the supervisor of animation on Ernest; we met on the teaser, before the movie went into full production,” Imbert recalls. “At the time, Benjamin was artistic designer, and I was just an animator. But the director of the teaser didn’t want to do the movie, so everybody moved up one title.”

Imbert had no trouble in adapting his friend’s stories: “I know Benjamin well and we share a common culture and common influences. I know how to fit into the spirit of his work, and can create new jokes and new scenes when I need to.”

The designs for the characters in Ernest had been pared down, allowing the expressive animation to carry the story. The characters in Big Bad Fox are even simpler constructions of lines, but the well-timed and often hilarious animation brings them to life. For Pig, the animators may be moving only a dozen lines, but they capture his frustration and impatience with the half-baked plans Rabbit and Duck hatch. To use master animator Eric Goldberg’s phrase, “the characters look like they enjoy being animated.”

The simple designs reflect Renner’s philosophy of drawing: “I love to draw, but I don’t really like taking too much time. For me, drawing is mostly to tell a story, that’s why I always stop my drawing when we understand what’s going on. Once my intention is clear and you understand it, I stop. I’m not going to add more precise lines under the character’s eye. If the audience understands, that’s enough. I like this way of drawing; the simplicity is something Patrick and I have in common.”

Echoes of Chaplin and Keaton

Big Bad Fox won a Special Jury Prize at the inaugural Animation Is Film festival in Los Angeles for its “celebration of the joys of traditional cartoon animation.” Like Chuck Jones and the other great Warner Bros. directors, whom they admire, Renner and Imbert looked for inspiration in the films of Charlie Chaplin, Buster Keaton and the other great silent comics. “Buster Keaton did his own stunts, and sometimes they were really dangerous,” says Imbert. “It’s amazing what they were able to do with their bodies. We do these things in animation, but it’s easy — we can cheat with gravity and weight — but they did it for real. They were able to touch the audience not only through the jokes, but through the pure hearts of the characters they played.”

“They’re anti-heroes, but with pure hearts,” agrees Renner. “They don’t mean harm — even if it’s a kid doing something terrible, he doesn’t mean any harm. You realize that when you see him.”

The lines on the characters look like brush strokes and the backgrounds are minimal watercolors that suggest the fields and forests where the stories unfold. “We really wanted the film to have a watercolor effect. Watercolor is a technique you often use when you sketch, so there’s a very spontaneous feeling to it, which is why I wanted to add it,” Renner says. “We cheated a little because we did it on computers, so it’s not as spontaneous, but it has a feeling of spontaneity. We tried to incorporate watercolor stains here and there we couldn’t control, and we’re pretty happy with the result. We were lucky to work with Zazyk (two artists who use that joint pseudonym when they collaborate), who were the lead background artists on Ernest and Celestine.”

“I think the watercolor also makes a film look warmer,” concludes Imbert. “The computer tends to make things look flat and the result can feel cold. Full HD resolution is so precise when you see it on TV; if you want a film to look like the good old days, you have to go inside the computer and ‘break’ something to give the art the correct feeling.”

GKIDS will release Big Bad Fox and Other Tales in U.S. theaters in February 2018.