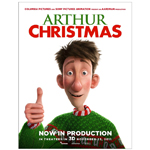 McAvoy will voice the lead role of Arthur Christmas, who is the youngest son of Santa Claus. Laurie will play his older brother, Steve. The movie revolves around answering the question of how Santa delivers presents to all the children in the world in one night.

Sarah Smith is directing the movie with Barry Cook and writing the screenplay with Peter Baynham. Carly Shelley, Peter Lord and David Sproxton are executive producers.

The film is the first produced under a three-year deal with Sony Pictures Animation and is scheduled for release Nov. 23, 2011.