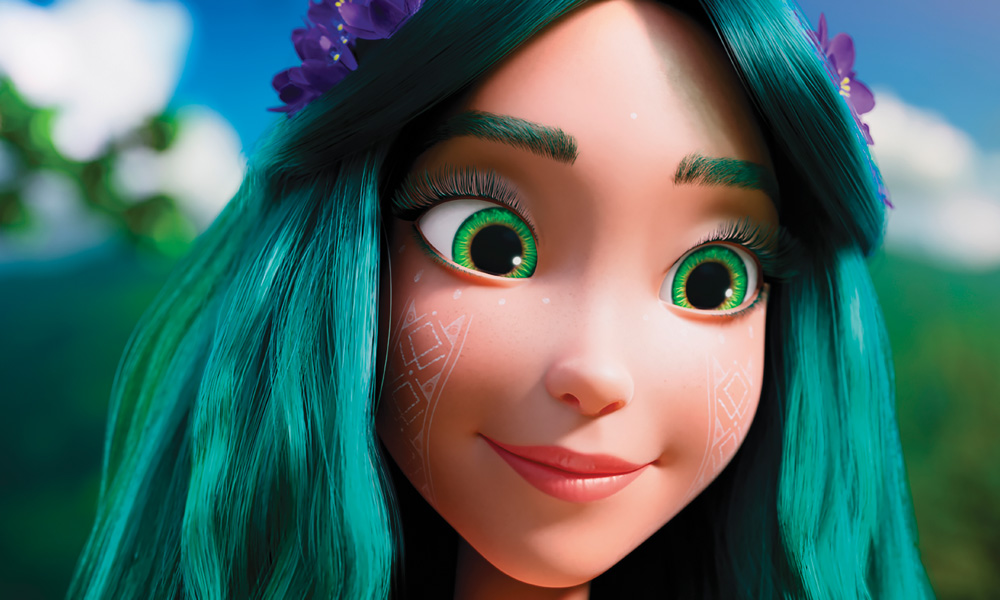 A beautiful Ukrainian wood nymph’s fantastic adventures are at the heart of the upcoming CG-animated feature Mavka. The Forest Song. The lovingly crafted movie, which is produced by Ukrainian media group Film.UA and its subsidiary Animagrad Animation Studio, promises to be quite a cultural event when it is released in theaters in 2022. The film’s producers Iryna Kostyuk and Egor Olesov were kind enough to give us a sneak peek at their exciting new project.

Kostyuk and Olesov point out that the film’s key sources of inspiration are Ukrainian and Slavic mythology as well as some of the literary classics of the region, including The Forest Song, a famous poem by Lesya Ukrainka. “Our main character is a unique, complex and powerful female icon that has never been brought out to the world before, especially in animation form, which is universal language,” says Kostyuk. “Mavka is a creature of ancient legends transformed into a symbol of undying love by the genius of poetess Lesya Ukrainka. While the animated movie is rich in Slavic authenticity and charm, we believe that its central plot and themes have universal appeal for audiences of all ages.”

Adds Olesov, “Mavka is quite a well-known character in Ukraine. That’s why the power of the brand is huge locally, which allowed us to ink and get out into a nationwide retail numerous licensing deals well in advance of the premier of the actual movie, which is truly a unique case. Ukraine celebrates Lesya Ukrainka’s 150th birthday nationally in 2021 and this significant cultural event holds a lot of meaning for our team and this project. Thus, a number of events will be held by our team with the support from state institutions such as the Ministry of Culture of Ukraine and State Film Agency.”

The Spirit of Preservation

The producers also point out that the film carries out two important missions that are close to their hearts. “One is spotlighting environmental issues in Ukraine, raising awareness of the extinction of endangered species of flora and fauna of the region, some of which are featured in the movie,” says Kostyuk. “The other is exporting the diversity of Ukrainian and Slavic heritage worldwide. This is why our project is supported by the Ministry of Culture of Ukraine, the State Film Agency, as well as World Wildlife Fund, Ukraine.”

Directed by Oleksandra Ruban and Oleg Malamuzh, the project’s animation is produced mostly at the Animagrad studio in Kyiv. According to the producers, more than 200 people are involved in the production process. The film will certainly have a strong presence at the upcoming European Film Market in Berlin in March as well as other movie events throughout the year such as Cannes and American Film Market.

Of course, producing the movie as the world was dealing with the COVID pandemic had its share of challenges. “We don’t have a full-fledged market in Ukraine of modern high-quality 3D animation, so Animagrad studio faces the challenge (as well as the national responsibility) of creating it,” says Olesov. “Producing European and even better quality of animation at a sane cost — is our competitive advantage. The Animagrad strategy is to release our movies both locally and internationally and introduce our series of movies with unique, powerful female characters which are either based on real characters or popular iconic myths. Our first movie The Stolen Princess centered on Mila, the Princess of Kyiv, which we’ll follow up with Mavka, and then we have Roxelana, who saves the world from a global war. Our first movie, The Stolen Princess, has already blazed the trail by being released in more than 50 countries.”

The producers also point out that although animation in Ukraine is relatively young, the industry is growing at a rapid pace and shows lots of potential. “Ukrainian studios are successfully working on commercial and festival animation films,” notes Olesov. “Several Ukrainian animation projects, feature films and series have shown quite a lot of promise in recent years both locally and internationally. There are many talented artists in Ukraine and animated content can travel around the world and open up many interesting business and cultural opportunities for Ukraine. We are absolutely open to effective international partnerships and hope that in the near future, we’ll be able to share with the world many new interesting stories through animation.”

Both producers are quite passionate about their film’s environmental message. “One of our goals was to spotlight the issues of deforestation in Ukraine and the extinction of rare animal and plant species,” explains Kostyuk. “To raise awareness, Mavka’s forest will be populated with some animals from endangered list, such as a lynx, bison, a black stork and a brown bear, and some of them play quite a role in the plot. We used real Ukrainian forests as location references for the film. During the script stage, our Mavka team used consultants from WWF Ukraine, who held lectures, workshops and an expedition to forests for our animators, so that the magical forest and its inhabitants in the animated feature felt as authentic and alive as possible.”

“We also initiated a long-term charity project titled ‘Save the Lynx!’ in support of the Eurasian lynx and its extinction,” she adds. “The money raised by this campaign, including part of the proceeds from the sale of licensed goods under the Mavka brand, is used to study the population of this rare species. This campaign won a United Nations Global Compact in Ukraine Partnership for Sustainability Award.”

Also high on the list of the production’s initiatives is using the movie to spread awareness of Ukrainian culture and literary classics. “We have all the support of the state, which recognizes the importance of the project to the nation as well as its international potential,” notes Kostyuk. “The project has twice received funding from the State Film Agency of Ukraine first in September 2016 and then in October 2020. The state has been helpful throughout this project and a lot of plans are set for 2021 to coincide with the 150th anniversary of The Forest Song‘s author.”

A Cultural Emissary for Ukraine

Special attention has also been paid to the film’s visual language, which celebrates Slavic ornaments, symbols, ancient runes and patterns from Ukrainian embroidery. Experts from the leading ethnographic research institutions of Ukraine (the Department of Folklore Studies of the National University, the Ivan Honchar Museum and the Museum of the History of Ukrainian Fashion) worked with the team to interpret them for the film’s state-of-the-art 3D CG animation.

When all is said and done, the producers would love audiences to feel inspired by their film’s fascinating heroine. “Mavka brings another strong female character into Ukrainian and European animation,” they point out. “Our hope is that the audiences worldwide will be inspired to ‘be like Mavka,’ that is, to share her values ​​and adopt her style, which is visually expressed in the combination of themes of nature and authenticity in a modern interpretation. The animated film’s ability to appeal to a wide family audience was appreciated by international buyers and distributors long before its release. The distribution rights have been acquired by 10 companies covering more than 20 countries in Europe, the Middle East and North Africa. In short, the most exciting thing about our project is that Mavka will give the audience something new — a world that has ever been seen in the world of animation before.”

Animagrad/Film.UA Group’s Mavka. The Forest Song will have a strong presence at the European Film Market in Berlin this week. For more info about the movie, visit mavka.ua.