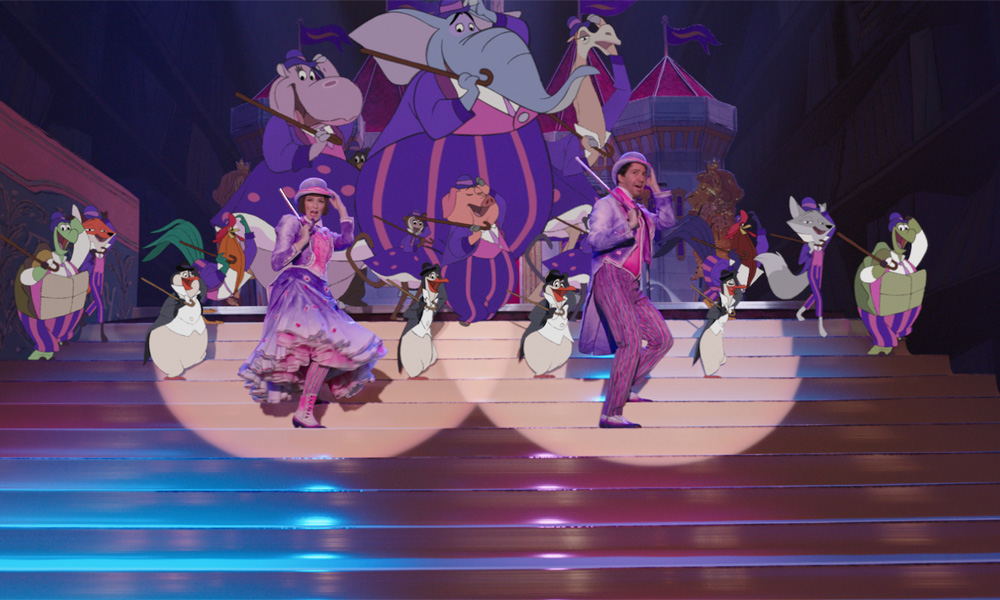 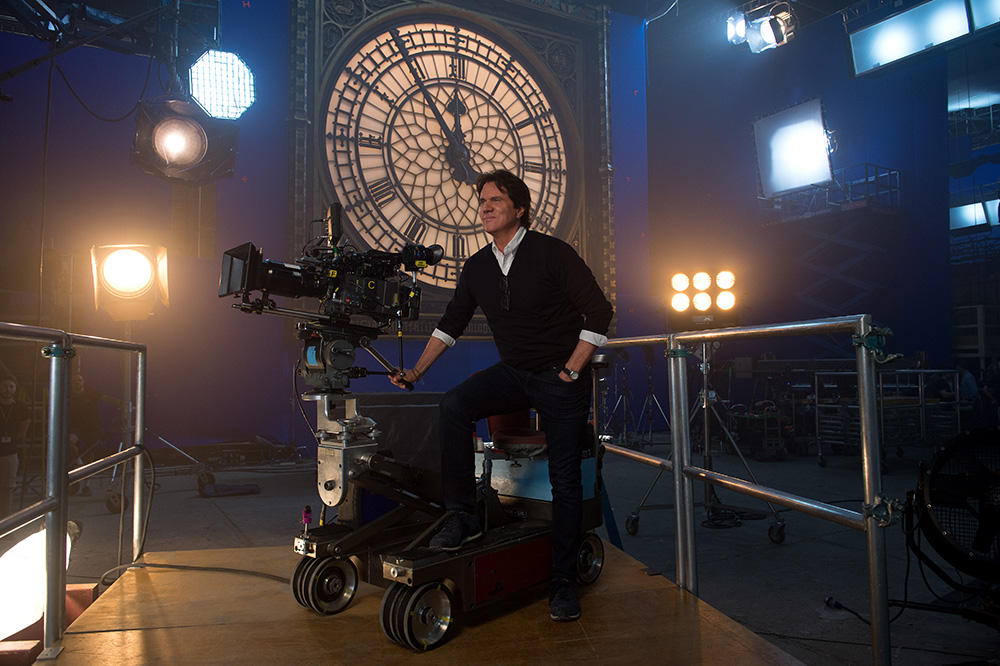 When it comes to evergreen family movies, it’s really hard to beat Mary Poppins, the classic 1964 adaptation of the beloved book by P.L. Travers’ starring Julie Andrews and Dick Van Dyke. This holiday season, fans of the unusual nanny will have a chance to experience her new magical adventures when writer/director Rob Marshall’s sequel Mary Poppins Returns opens in theaters. The much-anticipated musical stars Emily Blunt as the mysterious lead character and a star-studded cast that includes Meryl Streep, Lin-Manuel Miranda, Colin Firth, Ben Whishaw, Emily Mortimer, Julie Walters, and yes, Angela Lansbury and Dick Van Dyke as well. Just like the original, Mary Poppins Returns also features sequences where the live-action characters interact with 2D-animated characters and settings. We had the great pleasure of speaking with the film’s director about his new film’s amazing visuals and animation:

I guess the first question everyone asks is, what prompted you to do a sequel to such a beloved classic?

The 1964 movie is so spectacular in so many ways, and I recall the first time that I saw it, it became so much a part of me. I wanted to do something slightly different with the sequel. The original movie was mostly a fantasy: Cherry Tree Lane, where the Banks’ home was was shot in a soundstage, with those fantastic watercolor backgrounds by Peter Ellenshaw. What’s interesting about our film is that it’s set about 24 years later, against the Depression era. You feel the real world’s impact. Michael and Jane have grown up, and Michael’s three children are dealing with the loss of their mom. There’s a sense of loss and despair.

So we shot on location in London. Our Cherry Tree Lane has a more real feel to it. There are cracks on the sidewalks and runs on the sides of the building. We went for the authentic period feel of the 1930s, which is juxtaposed against the colorful fantasies and adventures that Mary Poppins brings to their lives. The looks of those adventures were limitless. We could go to into a Royal Doulton crystal ball (which is one of the animation sequence) and be in a completely beautiful, colorful world.

Your fondness for the original movie is even reflected in the new film’s poster, which has a delightful retro feel to it.

Yes, that was a definite homage to the musicals of my past, films such as Mary Poppins, My Fair Lady, Oliver, The Sound of Music. The films of that era had such beautifully hand-drawn posters. I remember loving those posters and those cast albums on vinyl. It opens you up to a totally different, exciting, vibrant world.

Emily Blunt is Mary Poppins, Lin-Manuel Miranda is Jack, Pixie Davies is Annabel, Nathanael Saleh is John and Joel Dawson is Georgie in Disney’s MARY POPPINS RETURNS, a sequel to the 1964 MARY POPPINS, which takes audiences on an entirely new adventure with the practically perfect nanny and the Banks family.

We know you are very fond of the animation in the original movie. Can you walk us through your process to create the animated sequences in the sequel?

I really wanted to return to the classic Disney animation of the original Mary Poppins era but in a different way. I really wanted to retain the hand-drawn 2D animation, which has such artistry to it. I felt that it was in the DNA of Mary Poppins to have that animation. I used myself as a barometer as what I wanted to see in this sequel, and I really wanted to see an animation and live-action sequence. We were able to do that and at the same time use new techniques to help us move through that animated environment. It’s very unusual, because we’re using the 3D version of our camera movement, and we have much more sophistication.

We were fortunate because we had many of the Disney 2D animators come out of retirement to work on this movie. In addition, some young animators as well were really interested to work with this old-school type of animation. The team was based in Ken Duncan’s studio in Pasadena. Every corner of the building was filled with animators. Jim Capobianco (story artist on many Pixar films including Coco, Finding Nemo, Inside Out, Monsters, Inc. ) was our animation director and Alonzo Ruvalcaba (Free Birds) was our animation producer. I have to say it was the most challenging and of most thrilling part of the movie for me because I was new to animation.

Can you talk a little bit about how you prepared the animation sequences?

There was a wonderful workshop that we did earlier on, as we were still writing the screenplay. I wanted to involve and collaborate with the animators as early on as possible. We met at the Disney Studios — there’s a Hyperion Bungalow, which is an old bungalow which is taken from the original Walt Disney Studio and moved to the Burbank location. It’s so beautiful and has such history. My writers (John DeLuca and David McGee), our composers (Marc Shaiman and Scott Wittman), production designer John Myhre and I went there and did a week-long animation workshop and went step by step through this animation sequence. We had animators from Pixar and Walt Disney Animation Studio.

Our outline kept changing thanks to all their brilliant ideas. It was honestly one of the most thrilling times. They are sketching the whole time. We’re talking about this 15-minute sequence where the kids are fighting over this crystal Christening ball which belongs to the mother, and it slips through their hands and cracks. So, when it cracks, the illustration on the ball changes. They have to go into the ball to fix it. It has two big songs, one is “The Royal Doulton Music Hall” and the other is “A Cover Is Not the Book” which is the Music Hall number. There’s another number which we call “The Chase,” which turns into a nightmare for the kids after one of the children is kidnapped.

I’d be talking an they’d be using watercolors or pen and ink, and they would hold up a beautiful drawing and say, “What about this idea?” They spoke through imagery, which I loved. We’d put that on the board. By the end of the week, we had all four walls covered. All this great art would come alive in the most amazing way with some of the greatest animation artists in the world.

How long did it take?

It was the first thing we shot, because I knew we needed the time. We shot it and I edited it as I was filming because I knew we had to start the process to get them working on it. It took over a year because it was all hand drawn and detailed. I was really thrilled with Disney, because I went to them and told them this is what I need to do, and I knew it was going to be much more expensive and a much longer post-production because of it. But they were completely on board and understood the difference. I must say when you see the film, you’ll understand why. It has that classic, familiar Disney artistry behind it.

How did the evolution of animation technology help you out?

We have five live actors inside the animation. They are integrated inside the animation. I’m shooting the film, so it’s not something that is completely drawn by the animators. They had to come to our world. I’m shooting a two-hour movie and this sequence is 15 minutes and is shot with major musical performances, singing and dancing. They needed to fold into our world. The integration was so detailed. We had to do previsualization and storyboards for every little bit of it. We also had to fit into the animators’ world as well.

Do you have any favorite parts that you’re really proud of?

I have to say “A Cover Is Not the Book.” It was wonderful to create a theatrical number set in a music hall stage with an audience, with theatrical lighting, spotlights and background and stage lights. Of course, we’re lighting it at the same time, but it needs to be completed by the animators. To see this theatrical performance inside this animated world is fantastic. We also took the four penguins from the first film and gave them a little more distinct personalities. It was so much fun to put them in the musical numbers. That was one of the big highlights for me.

Of course, you can’t have Mary Poppins without some fantastic visual effects sequences. Can you discuss some of details of working with the vfx teams at Framestore, Cinesite, Luma, Pixomondo and Ken Duncan Studios?

The animation sequence is one of the many adventures that Mary and the kids have in this movie. The first one is an underwater adventure they have as they go inside their bathtub. Meryl Streep plays Cousin Topsy, and they visit her and the whole room turns upside down. All of the adventures have a point because Mary has this master plan, which is meant to heal the family. It helps the children learn something and move forward. There are so many big set pieces. There’s a whole finale that takes place in the air. It was a wonderful sequence that Travers wrote herself.

We cherry-picked many of these adventures from the eight Mary Poppins books she wrote. It has to do with the magical balloon lady, and if you pick the right balloon you fly. So there’s a big musical number called “No Way to Go But Up” that is a big CGI event. When I work with actors, I really try to limit the amount of CGI work because I want to see how much we do in the real space. We did a lot of the balloon number in a real space, shot in the backlot at Pinewood Studio, which became our city park. Then, we moved it to green screen. But we tried to integrate it all so you didn’t feel like you were in this fake world.

As a final thought, what do you hope audiences will take home from your movie?

I did this movie because I really wanted to send this message of hope and joy out into the world. I just feel that we live in such a dark time. I just feel that this was a necessary movie to remember your childlike sensibility, to remember the light against the dark. Lin-Manuel Miranda plays a lamplighter, and that’s both a figurative job and a literal one: He is bringing light into the darkness of London. I feel that our film is doing the same thing, and that is bringing light into a darker time. That’s why such great actors like Meryl Streep and Colin Firth signed on, because they also felt that this was the right time to send this message out into the world.

‘Buñuel in the Labyrinth of the Turtles’: Drawn to Reality
‘Spider-Man: Into the Spider-Verse’: Spinning a Stunning Web