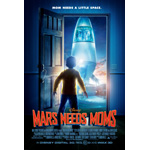 It’s getting crowded at the box office with this weekend seeing the third animated release in two months and the second in two weeks with Disney’s Mars Needs Moms.

The movie is the final release from the current incarnation of ImageMovers Digital, the Robert Zemeckis-founded company responsible for such animated fare as Disney’s A Christmas Carol. The film is based on a story book by cartoonist Berkeley Breathed and is directed by Simon Wells. It features the voices of Seth Green, Tom Everett Scott, Joan Cusack, Elisabeth Harnois, Dan Fogler, Dee Bradley Baker and Mindy Sterling.

The film will be released by Disney at more than 3,100 theaters and will be screened in stereoscopic 3D and 2D versions.

Last among major new releases is Red Riding Hood, a PG-13 thriller retelling of the fairy tale. Directed by Twilight’s Catherine Hardwicke, the film stars Amanda Seyfried and Gary Oldman and features visual effects from Rhythm & Hues. It is being released in just more than 3,000 theaters by Warner Bros.