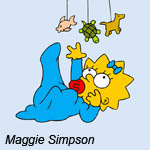 The youngest star of The Simpsons family, Maggie, who had the distinction of being voiced by the late Elizabeth Taylor in one episode, will star in her own animated short this summer. The 3-D short, which is called The Longest Daycare will play in theaters before Fox’s Ice Age: Continental Drift, which opens on July 13.

In an exclusive interview with ew.com, producer Al Jean said, “It’s hard to do a 20-minute Maggie episode, but in four minutes it’s great. She’s like Charlie Chaplin. [Executive producer] Jim Brooks thought we should do an animated short — a la the ones Pixar does before their features, a la the cartoons you used to see in the theater years ago — as a fun thing to give our fans. We just wanted to do this as a way of saying, ‘We appreciate how much people have stayed with the show and watched it for 25 years.’”

The short is directed by David Silverman (The Simpsons Movie) and enters on Maggie going back to the Ayn Rand School for Tots:

“They put each baby through an airport security-style testing machine to measure their future and hers says ‘Nothing Special’, so they put her in an area that’s not great,” says Jean. “If they put her in a good area, it wouldn’t be much of a plot…. For a four-minute plot, it has a number of twists and turns… It’s very sweet but funny.”

Don’t be surprised if other members of the famous Simpsons clan pop up in Maggie’s short. A 2D version of The Longest Daycare will play at The Simpsons panel at San Diego Comic-Con 2012 in July. 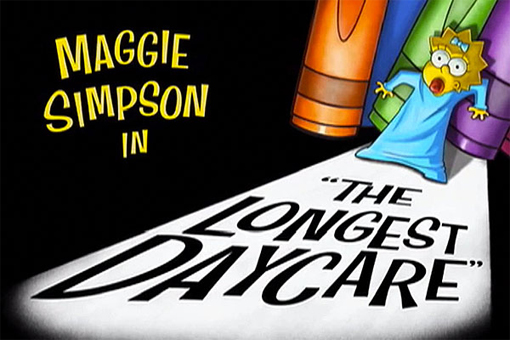