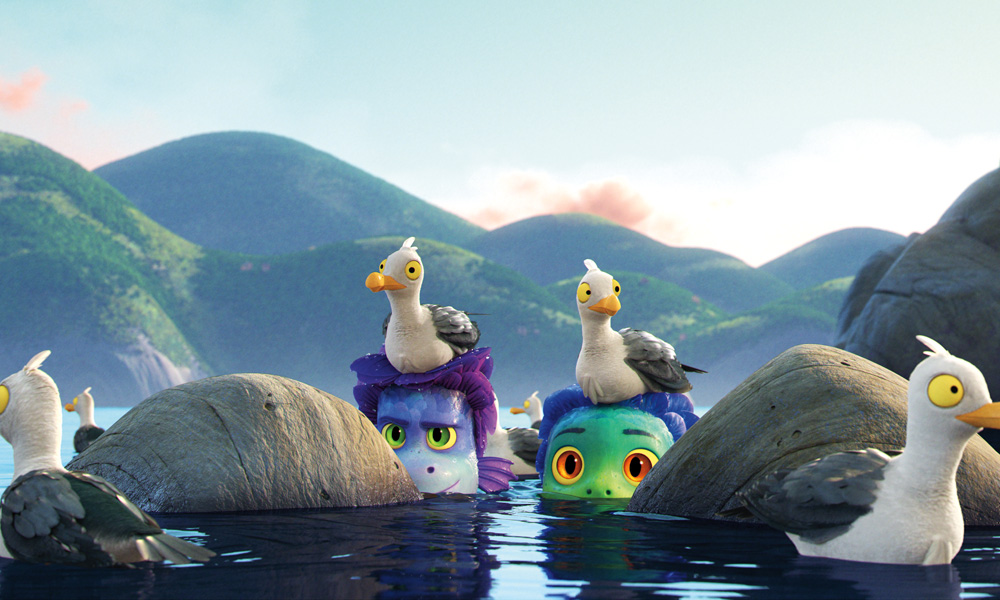 On the surface, Pixar’s 24th feature Luca is a charming, colorful valentine to the sun-drenched Italian summers of director Enrico Casarosa’s boyhood. However, the beautifully mounted feature, penned by Jesse Andrews (Every Day, Me and Earl and the Dying Girl) and Mike Jones (Soul) and produced by Andrea Warren (Cars 2, Lava), manages to explore universal themes such as the lasting power of true friendships and the human need for belonging.

As Casarosa, who was born and raised in Genoa and studied animation at the School of Visual Arts in New York City during his 20s, explains, “This movie is about the friendships that change us … It’s a love letter to the summers of our youth — those formative years when you’re finding yourself.” 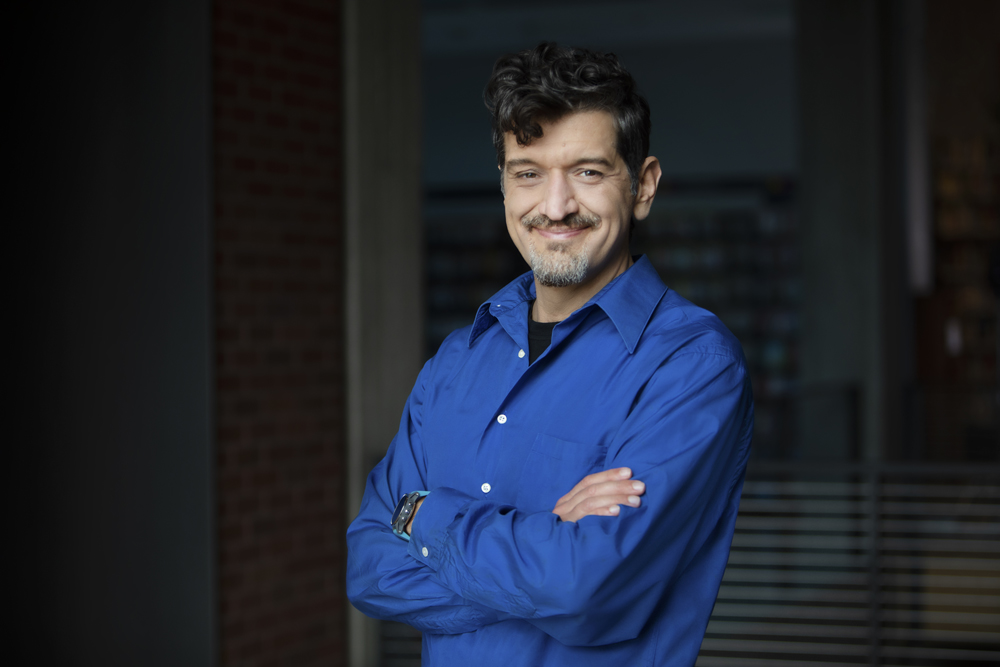 Luca‘s imaginative storyline centers on the friendship between two young boys, Luca (Jacob Tremblay) and the older Alberto (Jack Dylan Grazer) who are actually sea creatures who take on human form when they venture out of the Mediterranean. Maya Rudolph and Jim Gaffigan provide the voices of Luca’s parents, and newcomer Emma Berman voices Giulia, an unusual girl the boys meet in the Italian Riviera town near their home.

The director based the look of the film’s setting on his own hometown. “I had the luck to grow up in Genoa — a port city on the Italian Riviera,” he says. “It’s a very specific coast because it’s really steep — the mountains rise up from the ocean. I always imagined them like little monsters coming out of the water. The Cinque Terre is really close to where I grew up. These five little towns are lovely — stuck in time, really, because they’re so small. They’ve retained that old, seasoned look — so wonderful and picturesque. I moved to the U.S. in my 20s, and as often happens, the more you’re away from your roots, the more you value those roots.” 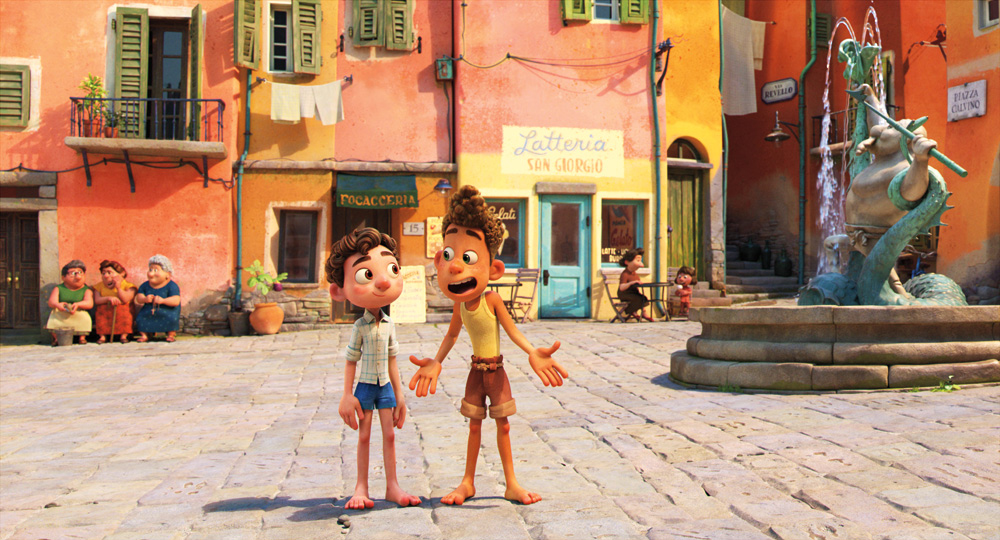 In addition to Italian landscapes, the overall visuals are heavily influenced by the art of Hayao Miyazaki and the films of Japan’s Studio Ghibli, which made a big impression on the director when he was growing up.

“I grew up with Miyazaki’s early TV work,” recalls Casarosa. “Once I started to study animation and Ghibli movies, I realized why some cartoons are so amazing and impactful. That is honestly one of the reasons I am in the industry. Miyazaki is such a hero of mine. I live and breathe his work. I also love the studio’s attention to detail, which was perfect to bring to our Italian world.”

The director explains that the anime look was perfect for a young protagonist who is interested in seeing the world. “His eyes are big and he’s leaving his world for the first time,” he adds. “His sensibility makes you notice nature. When he enters the human world, it makes you notice things about the human world that we take for granted. Of course, since our movie is set in Italy, it has a very specific flavor. So we pay close attention to the simple beauty of laundry drying under the rays of the sun. The fish-out-of-water experience lends itself beautifully as you see the world through the eyes of a young kid.” 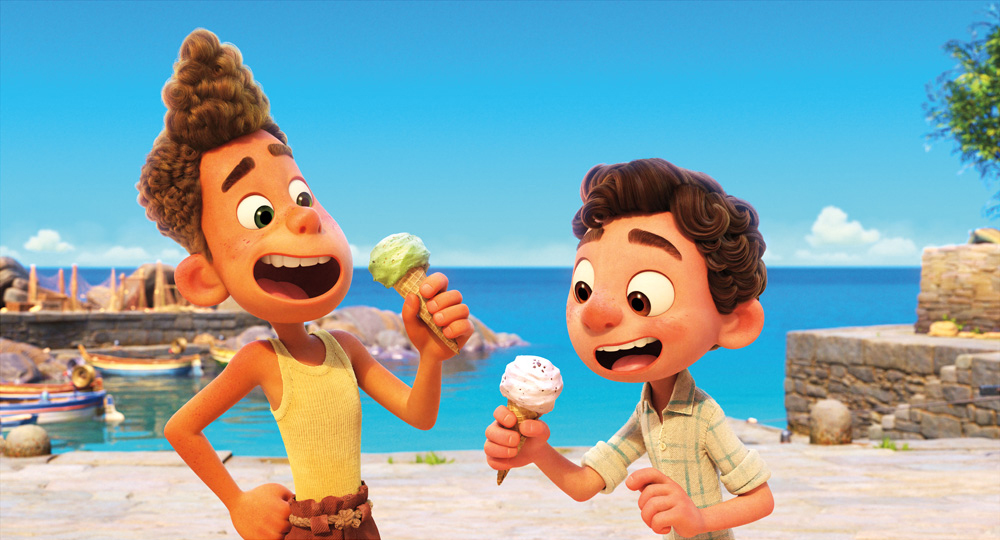 The film’s production designer Daniela Strijleva, whose Pixar credits include Toy Story 3, Monsters University and Coco, was part of a small group who traveled to Italy to research the film’s details. She says she loved joining the director’s parents for dinner. “Not only did we get to enjoy the food and study Italy, we also get to bond as a team and think about the creative process together … We visited the places Enrico went as a child. We watched him climb a 30-foot rock and dive in — realizing after the shock of it that he’d been doing it since he was a child. That extra layer of experiencing his memories and nostalgia really underscores his love of the place. And of course meeting people from the region — fishermen, locals — gave us so much to work with.” 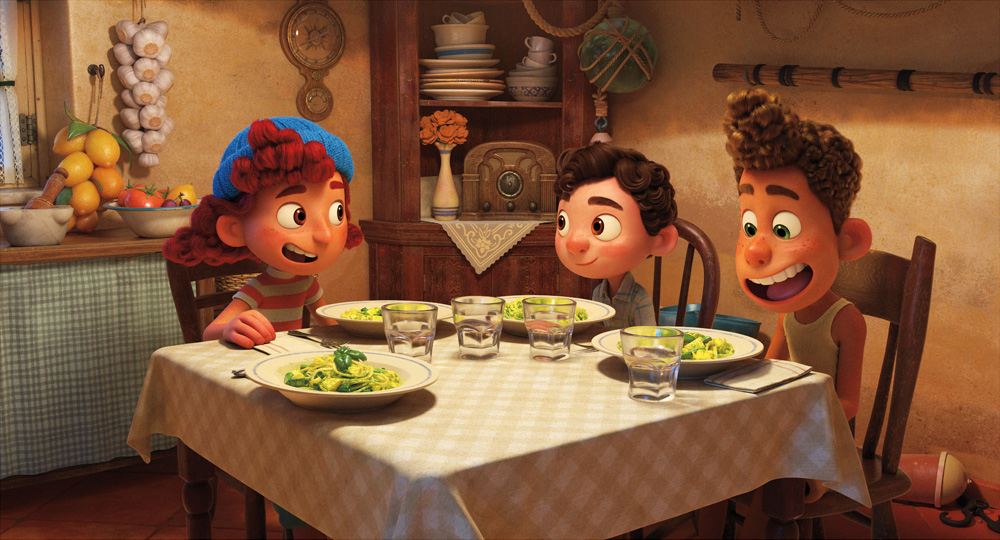 The look of the film’s appealing sea monsters was based on illustrations of the classic creatures seen in old Renaissance maps as well as scientific drawings of fish from the region and Japanese dragons and serpents. “We looked at a lot of sea maps, as well as lots of Roman mosaics and iconography like sculptures and fountains to see how sea life was represented in art,” says Strijleva, who also lived in Italy for a few years when she was a young before moving to the U.S. with her family. “We also looked at fish, but didn’t want to really be realistic, because our movie is a fantasy.”

She adds, “Enrico would draw these sinuous, simple shapes of reflections in the water that looked like traditional wood blocks. With that in mind, we were challenged with simplifying the look of a 3D film, which was super fun to do — hitting a certain level of caricature that’s true to Enrico’s style. It’s very expressive and lyrical. In fact one of the things I love about the movie is the fact that our main characters Luca and Alberto look like Enrico’s early sketches, just as he had imagined them in the beginning. I think it’s such a big success to be able to retain that hand-drawn charm in a CG-animated film.” 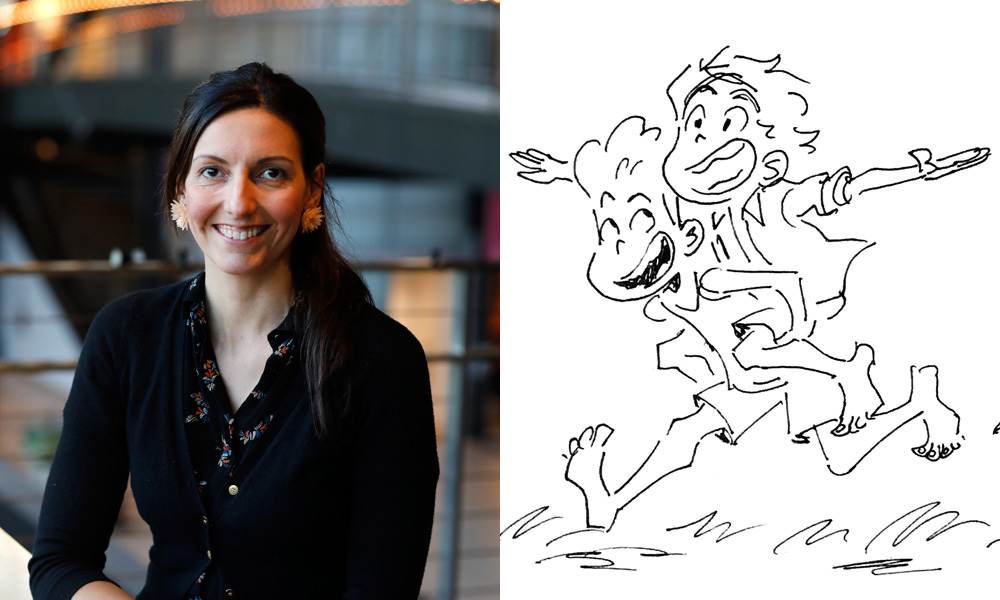 A Specific Place and Time

One of the qualities that sets the movie apart from many other animated projects is its beautiful evocation of a specific location at a particular time in history. The classic Italian Vespas, the way locals dunk their focaccia bread in their coffee, and the town’s posters and signs for popular Italian movies of the ’50s reflect Casarosa’s admirable pursuit of authenticity.

“I always felt there was something very lovely about the Italian Golden Age — the ’50s and ’60s,” he says. “The cinema and the music of that time is iconic and special. We have lots of Easter eggs that fans of Italian movies will be able to spot throughout the movie. There are homages to Marcello Mastroianni, Big Deal on Madonna Street, Divorce Italian Style, Roman Holiday. We used the signs as love letters to our favorite writers and filmmakers. You can see different movie posters in the town’s little cinema in the background. The casting for the Italian version of the movie is currently underway, and I’m curious to see who we can feature in the Italian language. It would be awesome to have some of those wonderful stars.” 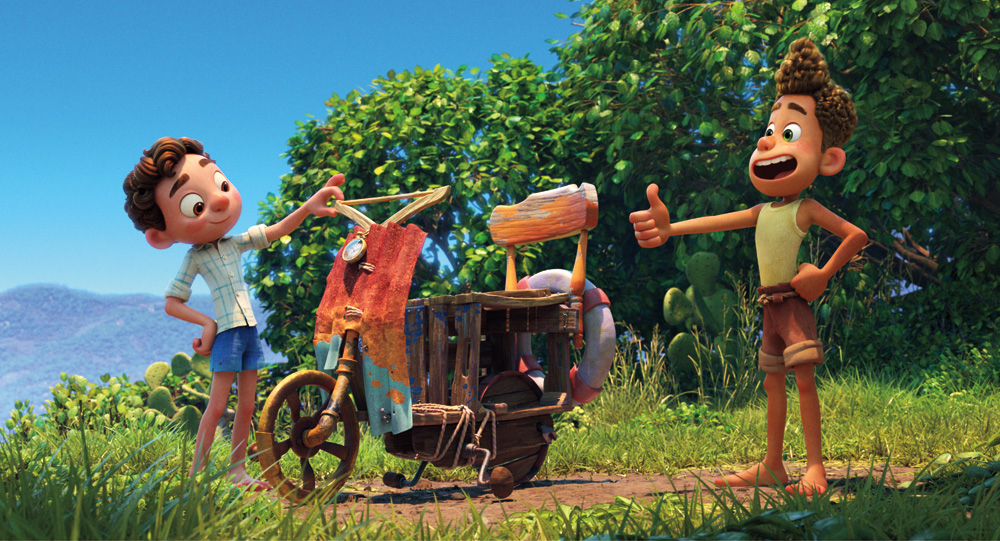 The filmmakers also felt the period setting was a better time to explore the division between the humans who lived on land and the sea monsters who dwelled in the sea. “You can see that things are getting worse for Luca and his family because of progress,” says the director. “There is more progress, scuba diving, and also there is more fishing in the waters, so that leads to more sightings and fear of each other.” 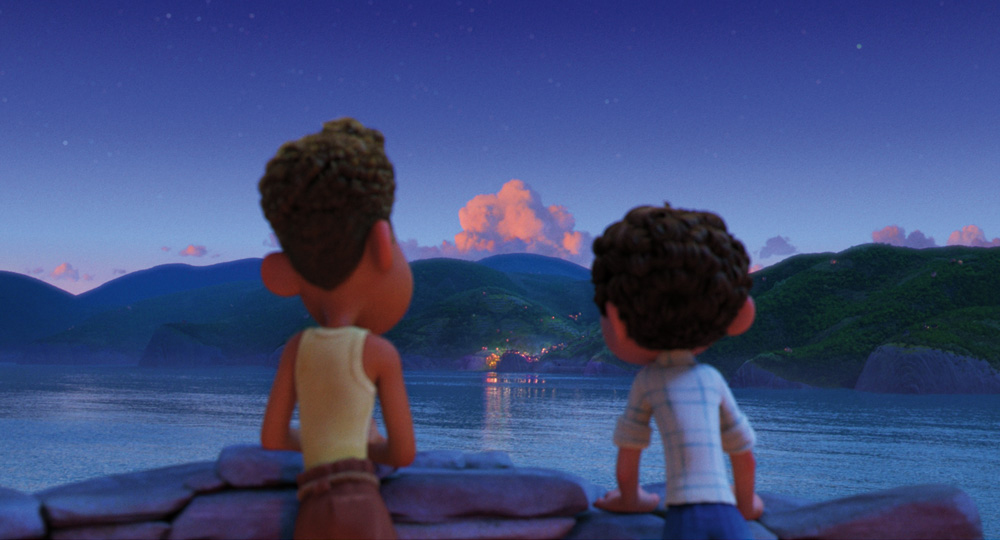 As Casarosa looks back at the four-year journey of bringing Luca and his world to animated life, he says he hopes the movie will remind audiences of their own childhood adventures and best friends who taught them about the world. “My hope is that you will be inspired to call your old friend and have a fun one-hour conversation,” says Casarosa. “It will only take you five minutes to be right back where you were a long time ago. If you are a kid watching the movie, then I hope you go ahead and jump off that cliff into the sea. Just make sure the water is deep! I guess just like Luca, recognize the voices inside of you that are holding you back and find those friends that help you overcome those fears!”

Pixar’s Luca premieres on Disney+ at no extra charge on June 18. 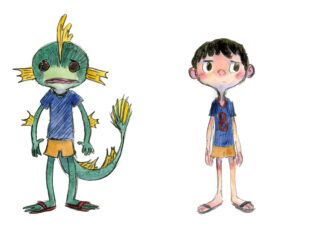 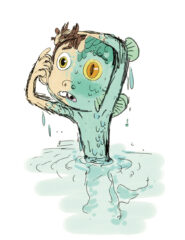 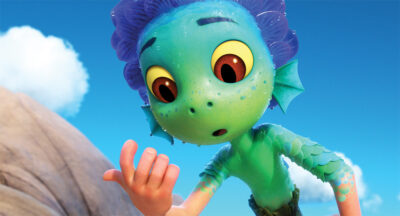 Director’s Note: The Pursuit of Imperfection

“Some of my love for 2D animation is in my DNA. And the other side is that I just love sketching and travelogging. I come from drawing comics and watercolors. Another inspiration was Sargent and his watercolor. We’ve talked about woodblock prints, and beautiful Miyazaki movies, but then there’s also Sargent who would do these beautiful watercolors in Venice. We looked at a lot of those. I just think there’s something wonderful about trying to bring these two things together.

“I remember someone asking me when I pitched La Luna, it was all watercolors, and it was, ‘But you want to do it in watercolor?’ And I was like, ‘Well, I mean, you know, we’re at Pixar and I think we should use our tools, but how do we bring some warmth and imperfection…’ I think the thing I don’t always love about computers, there’s a certain sheen and a certain perfection to it. Now it’s gone past that and it’s gone toward realism. But I come from loving sketches and I’m not one to love a perfectly painted picture that is realistic.” — Enrico Casarosa