A researcher working at the British Film Institute in London has found in its archives the only known copy of a long-lost Walt Disney film starring Oswald the Lucky Rabbit — Mickey Mouse’s precursor. The six-minute film, Sleigh Bells, will be screened for the first time since its release in 1928 next month at the BFI, having been restored by Walt Disney Animation Studios.

“What a joyful treat to discover a long-lost Walt Disney film in the BFI national archive and to be able to show it to a whole new audience 87 years after it was made,” said the archive’s head curator Robin Baker. “The restoration of this film will introduce many audiences to Disney’s work in the silent period.”

The film was stashed in the archives 34 years ago as part of a lot from a closed London film lab, labeled only with the title (“There must be a hundred things called Sleigh Bells,” a BFI spokesperson told The Guardian) and the date 1931. The researcher who unearthed it was browsing the roughly million-item catalog for lost Disney titles and realized the potential significance of the seemingly generic title.

Sleigh Bells features silent, black and white animation by Walt Disney and Ub Iwerks, and shows Oswald at an ice hockey game in winter with all the surreal comedy touches expected of early 20th century animation — Oswald removes his ear to use as a balloon, a laughing donkey gets a puck in the kisser, there’s an elephant for some reason, etc.

Oswald the Lucky Rabbit in Sleigh Bells will have its world premiere as part of BFI’s “It’s a Disney Christmas: Seasonal Shorts” program on December 12. 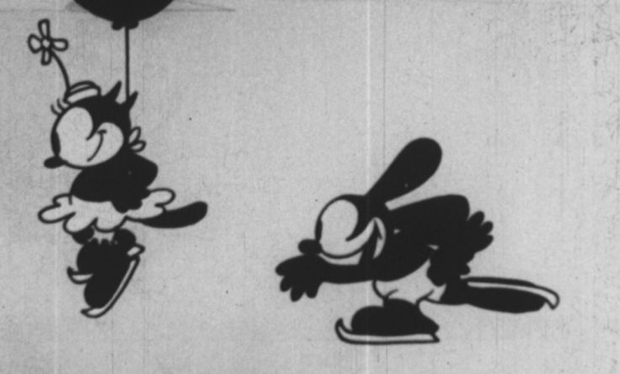