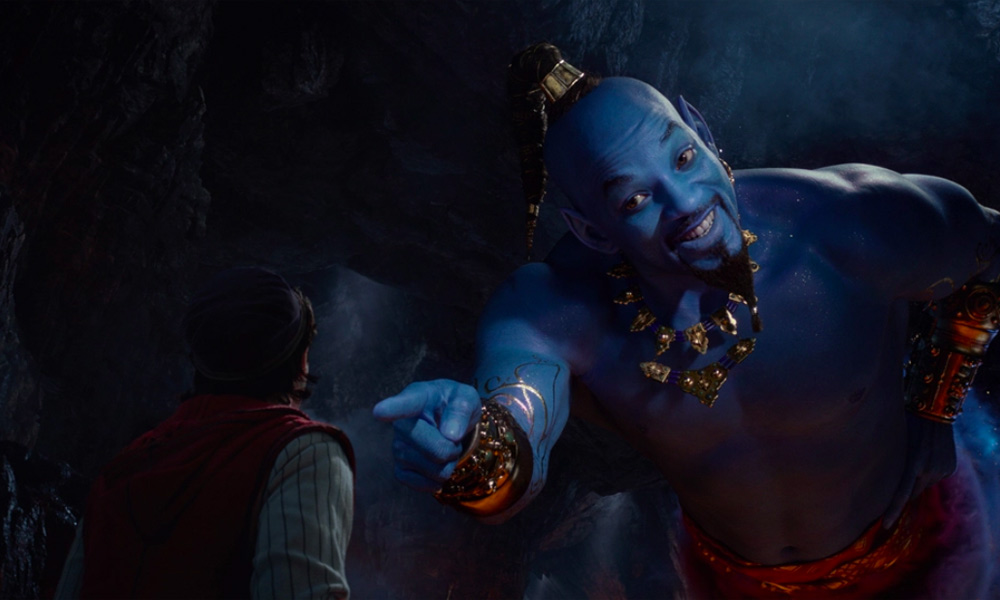 After months of speculation and Internet grumbling, moviegoers can finally find out for themselves whether Disney’s latest live-action version of animation fan favorite Aladdin is worth checking out this weekend. The feature, which is directed by Guy Ritchie (tough guy British helmer, best known for gritty pics such as Lock, Stock and Two Smoking Barrels, Snatch and the Robert Downey-starring version of Sherlock Holmes) and stars Will Smith as the fast-talking blue genie (who has the impossible task of following in Robin Williams’ huge curly-point slippers).

The film, which is estimated to bring in anywhere between $70 million and $90 million domestically and $175 million overseas, is currently scoring 70% on review compilation website rottentomatoes.com, will have little competition from other new titles in the family audience arena this weekend. It will face off against John Wick 3, Avengers: Endgame and Pokemon: Detective Pikachu. Fantasy and horror fans may also want to check out David Yarovesky’s Brightburn, a twisted take on the Superman trope which finds an alien child crash-landing on Earth, but this one would rather wreak havoc than save humanity!

Here is a quick sampling of what the reviews are saying about the new Aladdin to help you make up your own mind about the musical.

“Aladdin, the new live-action re-whatever with a blue Will Smith popping out of the lamp, may not be the worst product of the current era of legacy intellectual property exploitation (it’s likely that the worst is yet to come), but like most of the others it invites a simple question: Why? The answer — spoiler alert: “money” — may not surprise you… the movie itself, while not entirely terrible — a lot of craft has been purchased, and even a little art — is pointless in a particularly aggressive way.”

“No one really needs this mostly middling, fitfully funny and never unpleasant movie. And the movie itself seems cheerfully aware of that fact as it deftly lifts lines, beats, characters and songs from its 1992 predecessor, every so often punching up the comedy, wrinkling the plot and injecting a dash of politically corrective subtext.”

“The combination of diverse casting and female empowerment themes results in a perfectly politically correct Aladdin for these times. The only thing that seems to have been left out is the magic, which is a bit of a problem considering that one of the main characters is a genie.”

“Where the director really shines is in melding practical elements with virtual ones. Whether making Smith’s computer-enhanced and cerulean-skinned Genie look natural sharing the screen with Aladdin or swooping the camera along magic carpet rides through virtual sets, Ritchie’s style embraces the kind of expressionism needed to pull off such a fanciful tale.”

And a behind-the-scenes look at the making of the movie: