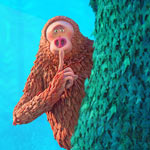 LAIKA’s much-anticipated 2019 movie The Missing Link has found its home in the U.K. Lionsgate has picked up the rights from AGS Sales, and presented it at its CineEurope session in Barcelona today.

Writte and directed by LAIKA veteran Chris Butler (ParaNorman), the stop-moton film follows Sir Lionel Frost (Hugh Jackman), who considers himself the world’s foremost investigator of myths and monsters. He travels to the Pacific Northwest to prove the existence of a legendary creature that is the missing link (voiced by that other hairy creature Zach Galifianakis)! Link, Frost, and fellow explorer Adelina Fortnight (voiced by Zoe Saldana) go on a mission to find Link’s distant relatives. Emma Thompson, Stephen Fry, Timothy Olyphant, Matt Lucas, David Walliams, Amrita Acharia, and Ching Valdes-Aran are part of the voice cast.

LAIKA’s head of production and Oscar nominee Arianne Sutner (Kubo and the Two Strings) is producing with Oscar-nominated and BAFTA winner Travis Knight (Kubo). The film is LAIKA’s fifth feature and will be released through Annapourna Pictures in the spring of 2019 Stateside.