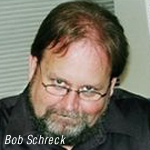 Feature-film production and finance company Legendary Pictures is getting into the comic book business with the launch of a new publishing arm to be headed up by industry veteran Bob Schreck.

The company plans to publish between four and six graphic novels in print and digital formats, with the first project expected to be published in the first half of 2011.

The move should come as no surprise, given Legendary’s record co-financing and co-producing with Warner Bros. such fan-friendly hits as The Dark Knight, Superman Returns, Watchmen, The Hangover, 300, Where the Wild Things Are, Jonah Hex, Clash of the Titans and Inception.

Schreck began his comics career in the 1980s at the now-defunct Comico, before spending much of the 1990s at Dark Horse Comics editing among other projects Frank Miller’s Sin City series. He helped found indie publisher Oni Press, which launched in 1997, and spent nearly a decade working at industry giant DC Comics. He most recently worked for IDW Publishing, based out of San Diego.

You may also like...
Related Topics:Comics, Launches, Legendary, Pictures, Venture