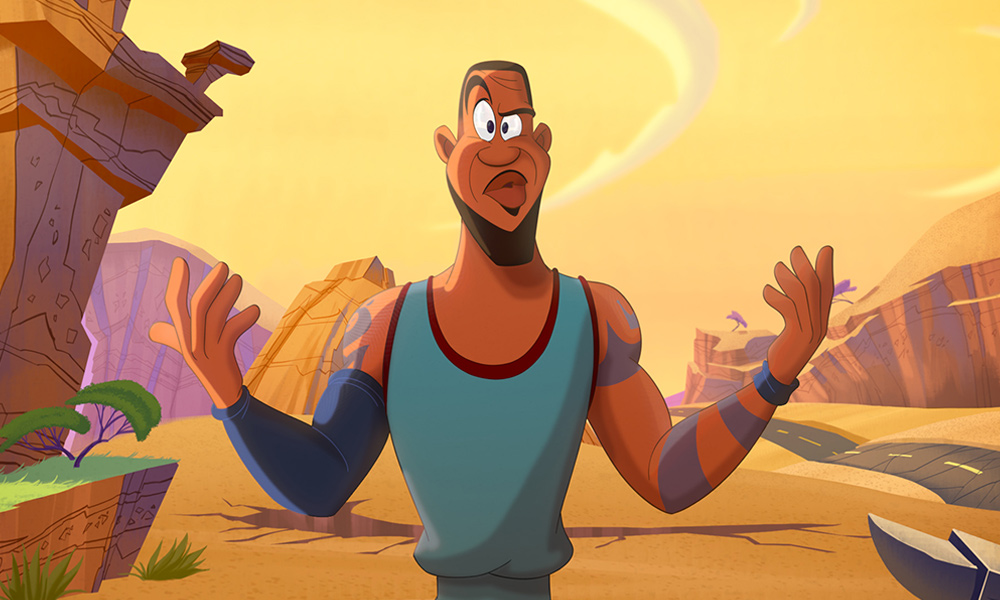 There’s a lot more going on in Warner Bros. Pictures’ Space Jam: A New Legacy than simply the reteaming of a lionized hoopster and wascally wabbit. Sure, it’s built around a high-stakes basketball game between the Warner Bros. Looney “Tune Squad,” led by LeBron James, and a team of virtual avatar hoopsters called the “Goon Squad.” But it is also an epic match-up of 2D and 3D animation and visual effects, created by an army of artists comprising both toon legends and relative newbies. 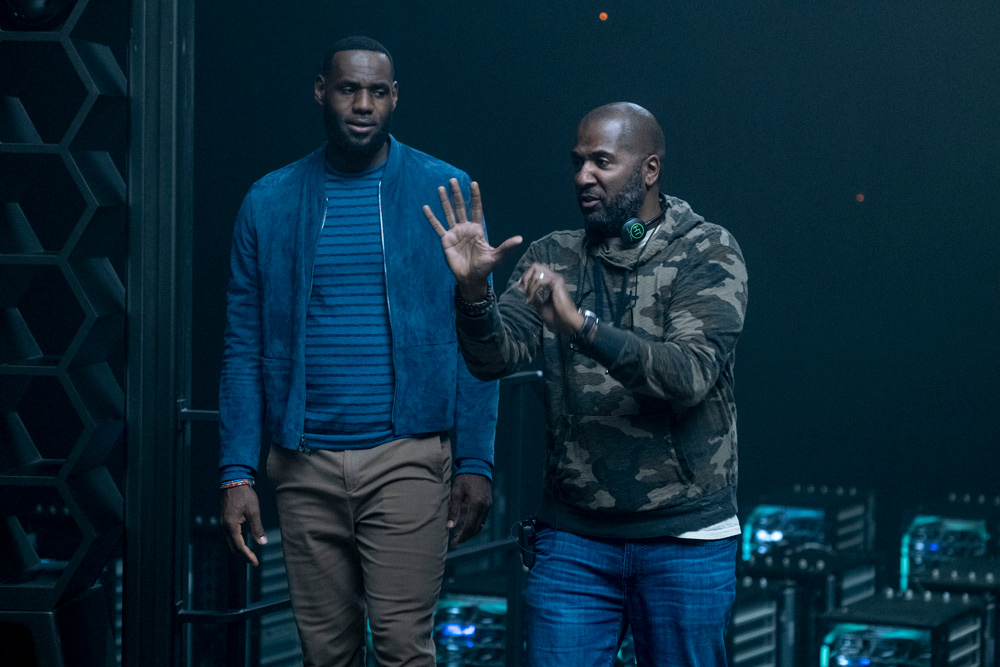 The film’s most notable newcomer to animation and visual effects is its director, Malcolm D. Lee, who is known for such live-action comedies as Girl’s Trip. “I didn’t know that I needed to make this movie,” says Lee. “Growing up I was a big fan of the Looney Tunes and I’m also a huge fan of LeBron and basketball, and this was an opportunity to play in a sandbox I hadn’t played in before.” Lee adds that the notable teams from Warner Animation Group and ILM guided him through the process, allowing him to “be more nimble about the storytelling.”

Space Jam: A New Legacy is of course the long-awaited follow-up to the 1996 hit Space Jam that paired Michael Jordan and Bugs Bunny. What hooked the director into the project was the set-up story involving King James and his fictional son Dom (played by Cedric Joe), a videogame geek who’s ambivalent about basketball and who gets trapped inside the Warner Bros. digital server-verse. “That father/son relationship was something I wanted to dive into and take hold of,” Lee says, adding, “When I came on there was a little bit of a disconnect about what story was being told and how it was being told, so it gave me an opportunity to put my stamp on it and give the film a direction when it was a bit rudderless.” 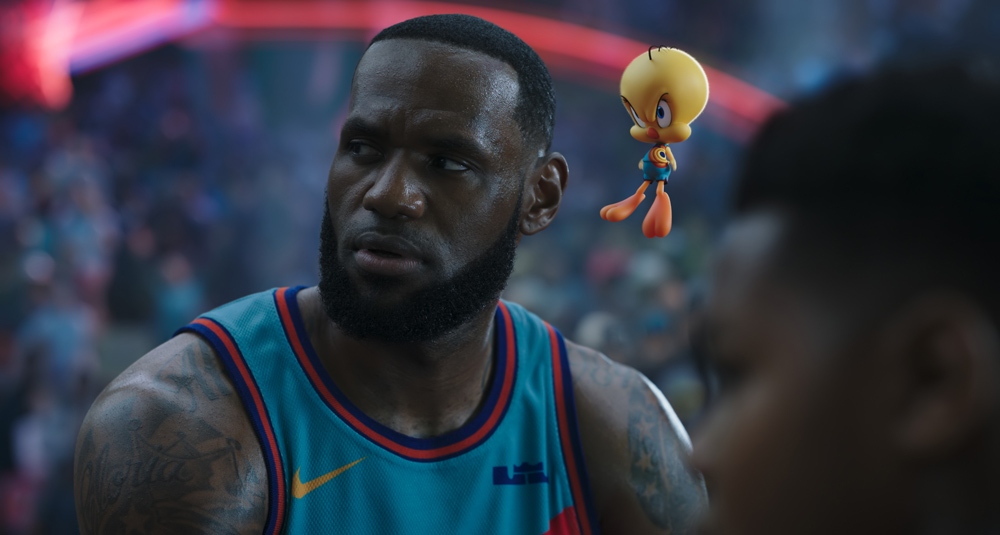 One on One with the Greenscreen

LeBron’s odd odyssey to rescue his son finds him thrust into a host of different worlds, from the high-tech domain of … wait for it … Al-G Rhythm (Don Cheadle), the A.I. ruler of the server-verse who sets up the climactic basketball game, to “Tune World,” which looks like it came straight from the desk of Maurice Noble. With an estimated 80 percent of the live action staged against a greenscreen, a lot of visualizing was required from production designer Devin Crane (Smallfoot), who also oversaw the film’s CG animation direction and art direction.

“While each world changes style and look, we had to keep it consistent with the live-action production design,” Crane says. “I thought of it almost like Disneyland, like these sets were actually real and you could walk around in them.” The 2D, painted look of Tune World’s backgrounds were digital, but a program was developed in Photoshop to mimic paint textures. “Everything was designed to make the stuff feel as hand-drawn as possible,” says Crane. 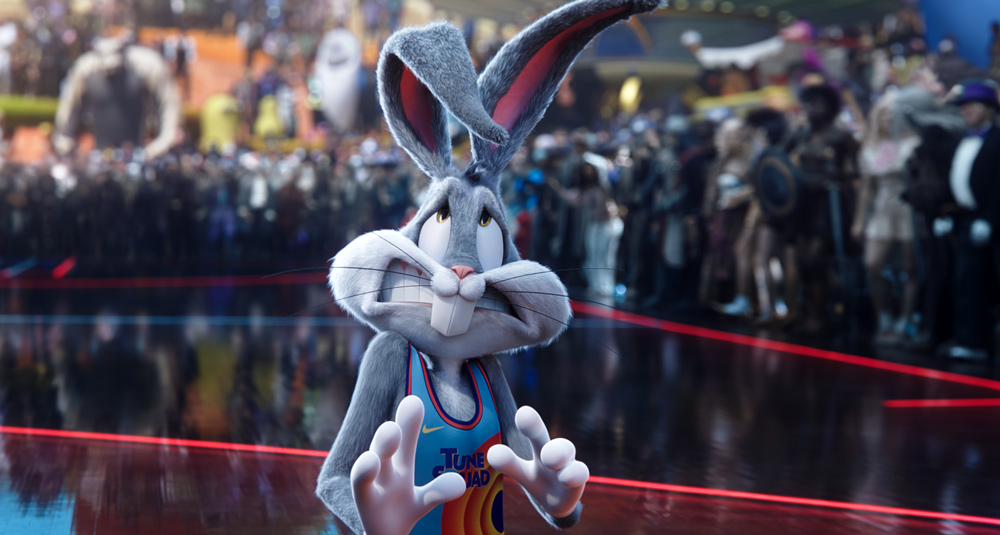 The Looney Tunes also change form depending on the world. Bugs, Sylvester, Yosemite Sam (all voiced by Jeff Bergman), Daffy, Porky, Foghorn Leghorn (Eric Bauza), Tweety (Bob Bergen), Granny (Candi Milo), Wile E. Coyote (silent) and Lola Bunny from the original Space Jam (Zendaya) — are first seen as their normal selves in hand-drawn animation, but then transform into heavily textured digital versions. “The trick is finding a way to make them look different from every angle,” Crane says. “We spent a good six months doing tons of drawings and sculpting, then tweak and move points around. Eventually it all started to click.” ILM’s Kevin Martel served as the digital animation supervisor, while Grady Cofer supervised the visual effects.

Wearing more hats than a stylish hydra, Crane was also instrumental in designing Cartoon LeBron (who was key animated by Sandro Cleuzo) and the Goon Squad, based on and voiced by actual basketball stars: The Brow (voiced by Anthony Davis), the serpentine White Mamba (Diana Taurasi), Arachnneka (Nneka Ogwumike), elemental Wet-Fire (Klay Thompson), and Chronos, a clock creature (Damian Lillard). Characters from the Hanna-Barbera catalog, the Animaniacs, even the Iron Giant also make appearances (only Pepé Le Pew is missing, having been deemed problematic during the development stage).

Welcome to the Post-Vis Universe

One of the unique challenges of Space Jam: A New Legacy is that its production did not follow a linear pre-production/production/post-production blueprint. “They called it ‘post-vis’ because a lot of stuff was done after the live action had for the most part been shot,” says Spike Brandt, the film’s 2D animation director and Warner Bros.’ go-to guy for keeping its classic cartoon heroes in character and authentic. Even though there was a sizable storyboard department on the film, which included such veteran artists as Ed Gombert and Paul & Gaëtan Brizzi, a lot of the visualization was done on set during the live shoot. “I spent quite a bit of time on the set,” Brandt says. “I had a mobile station with an iPad that was hooked into the cameras by means of a wifi connection, so as they were shooting I was getting screen grabs through the camera lens in real time. That allowed me to do quick draw-overs by means of Procreate.” 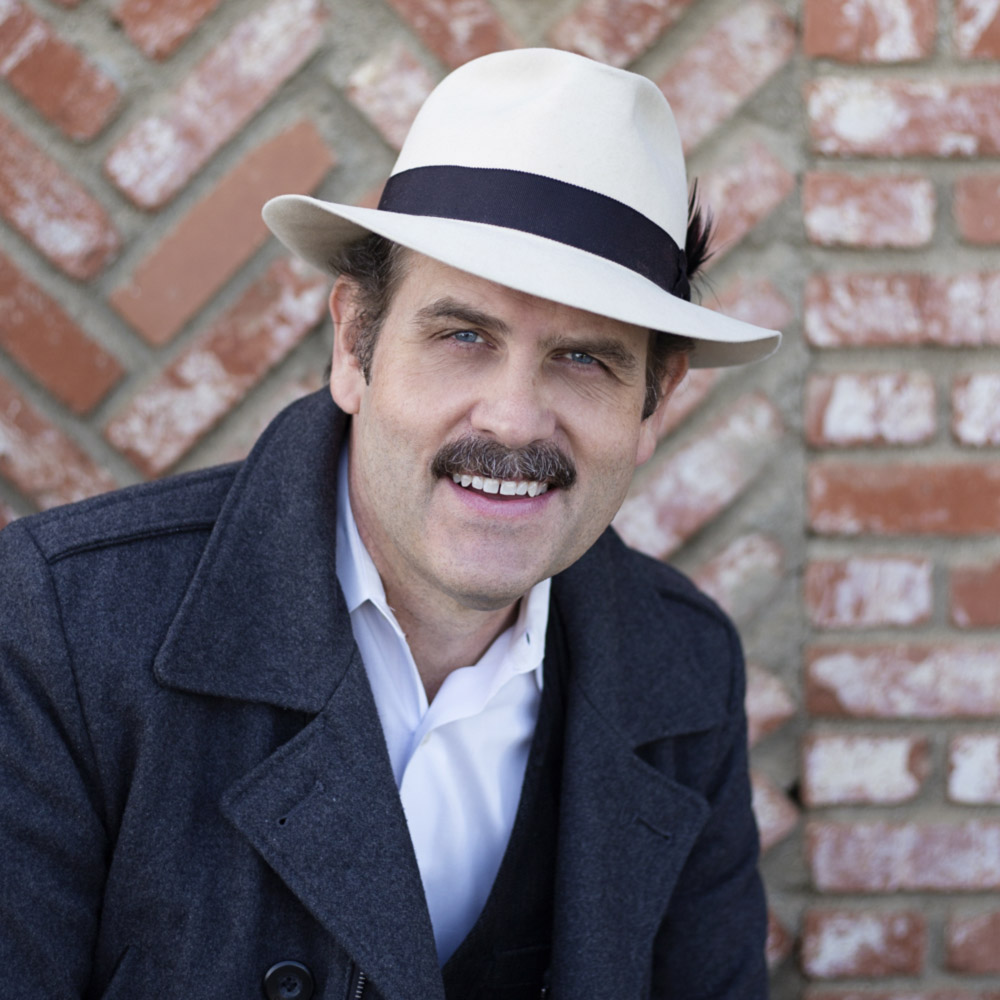 The animation team under Brandt’s direction included such vets as Eric Goldberg, John Pomeroy, Tony Bancroft, Raul Garcia, Dan Haskett, Chuck Gammage and Shawn Keller, with Tony Cervone (another classic Looney Tunes specialist) also contributing some work. The artists’ methods of working covered as many worlds as the film’s story. “Ultimately, everything was put into Harmony,” says Brandt, “but some people started animating on paper, some people started in other programs they were more familiar with, and some people were doing it directly in Harmony. It was exciting to be able to work with these guys again as well as some for the first time, and see their enthusiasm for doing 2D animation on the big screen again. A number of times people said, ‘I can’t believe we’re doing this again!’” Brandt adds that veteran visual effects wizard Scott Johnston was instrumental in creating special processes to “keep everything from tipping out of control.” 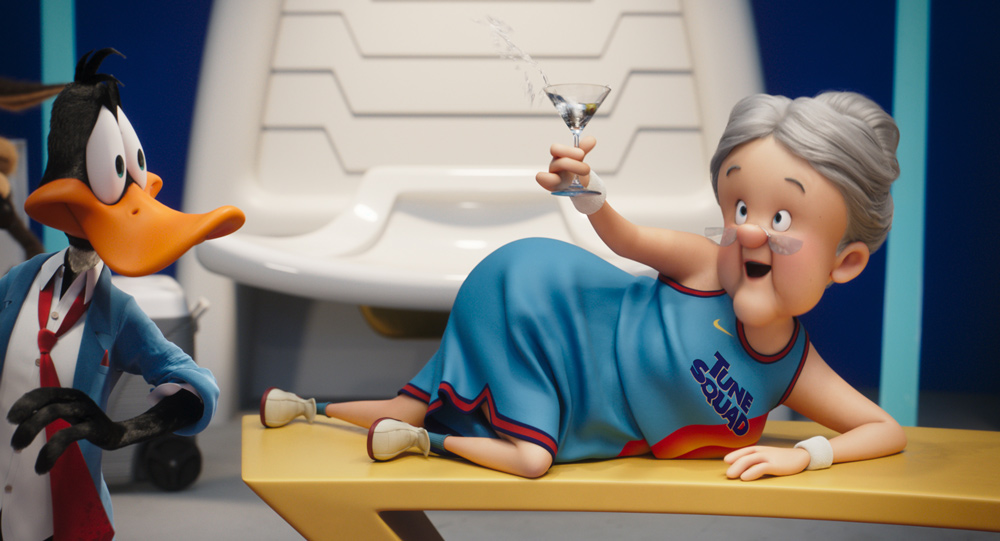 As if marshaling a literal army of artists and technicians on a unique production with a flexible pipeline wasn’t challenging enough, there was another fallen tree over the road: COVID-19. Principal photography was completed by September 2019, just before the pandemic hit in earnest, but the actual animation work didn’t begin until a year later, sending the artists home to work. Then there were retakes and changes, including the late decision to give the Goon Squad voices. “It was like the writing never stopped,” Brandt says. “A lot of stuff got pushed later and later into the schedule. One shot was some 600 frames long, so it was like, how do we get these long shots through the system?”

Not only did the team manage to get it all done on time, but all are thrilled with the results. Especially thrilled, by all accounts, is the film’s live-action star. Says Brandt, “When we wrapped principal photography, LeBron said, ‘[Space Jam] really meant something to me as a kid, and the idea that I’m here and we’ve gone through this process together…’ It was pretty amazing for him.” 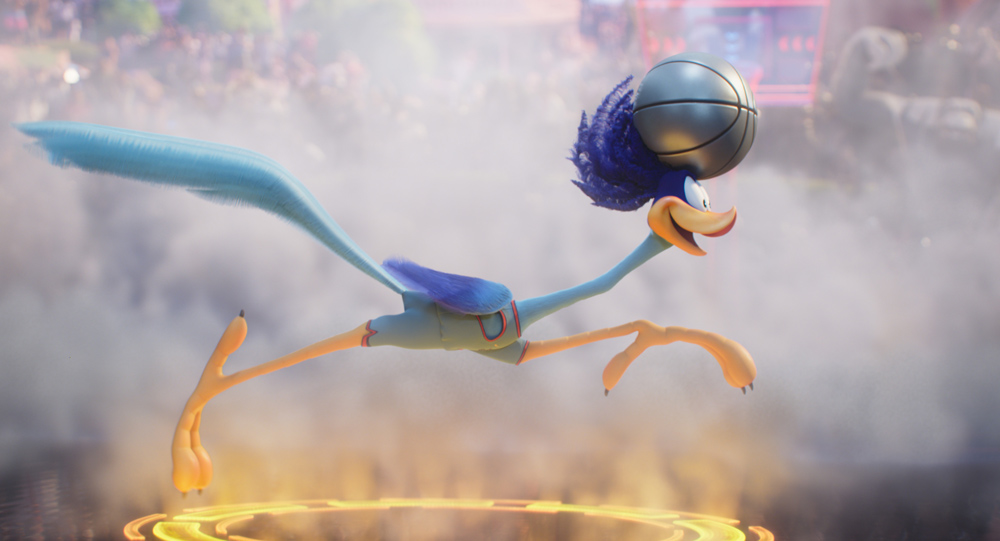