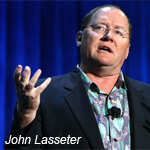 With fans’ anticipation for Brave reaching high-frenzy levels in the next couple of weeks, the folks at Bleeding Cool managed to chat with Disney/Pixar Chief Creative Officer John Lasseter about some of Pixar’s upcoming movies. Here’s what he had to say about The Good Dinosaur and Pete Docter’s “inside-the-mind” project.

On The Good Dinosaur:

“What if the meteor that killed off the dinosaurs missed Earth and dinosaurs kept living? It’s really a great story because they are very funny dinosaurs. They are kind of cartoony but they are dinosaurs, they are not walking around with clothes on or anything like that, they still are kind of dinosaurs. We focused on mostly the plant-eaters, not the carnivores… Their society becomes more of an agrarian society, meaning farmers. They become farmers.”

“It’s a very funny story about a certain way of life that a young dinosaur has trouble fitting into and he ends up going on this quest. He kind of messes up and he has to put everything right by going on this quest and on that quest he meets this our character that is an outcast from his society too and so the two of them form this bond and it becomes this unique kind of story… kind of hard to describe. It’s a very special, very emotional story but it’s so quirky and nutty. That’s really the hallmark of Bob Peterson’s and Peter Sohn’s talent. Bob Peterson is truly one of the funniest people I’ve met and it’s coming through with this story. Pixar does dinosaurs, but like anything we touch… it’s unlike any other dinosaur picture you’ve seen ‘cause it doesn’t fit in your typical [idea of] what you think dinosaurs are. It’s absolutely beautiful too.”

“And then Pete Docter… is working on the next one. We don’t have the title for it yet, but it takes place in the mind. Pete has this way of constantly trying to figure out something that we’re all familiar with in some way… he’s constantly looking for these kinds of things. You look at people oftentimes and they do something to make you go ‘What are they thinking?’ or it’s like how a song gets stuck in your head and you just can’t get it out. Little quirky thing alike this that we all do. Certain emotions just seem to take us over, anger or happiness, where you start giggling and laughing and you can’t stop. He thought ‘I want to take a look at that, explain that.’ His idea is that the emotions of this little girl are the characters and it takes place in the head of this little girl, and shows how they control things that go on. It’s very, very clever and it’s truly unlike anything you’ve ever seen, yet it explains things you’ve seen.”

The Good Dinosaur will be released by Disney on May 30 2014, while Docter’s movie is expected to open in 2015.