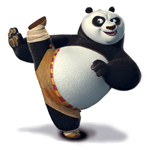 Po is back and ready to turn up the heat at the box office for the Memorial Day weekend.

The PG-rated Panda 2‘s main competition is another sequel, the R-rated comedy The Hangover, Part II, which Warner Bros. is opening at about 3,600 cinemas. They’ll face an already-crowded summer slate that includes Pirates of the Caribbean: On Stranger Tides, Bridesmaids and Thor.

The capping a big week of promotion for Kung Fu Panda 2, which the studio will promote Thursday with a morning event at the Arclight Hollywood featuring the 42-foot tall giant helium balloon of Po from the world-famous Macy’s Thanksgiving Day Parade, as well as face painters, balloon animals, martial arts demonstration, kung fu demonstration, and traditional lion dance.

The star of the film also met baseball star Pablo Sandoval of the San Francisco Giants on the field before a game against the Oakland Athletics at AT&T Park in San Francisco.

So far, the film is garnering mostly positive reviews. Rotten Tomatoes has the film ranked with a positive rating of 71 percent, while Metacritic gives it a 77.

The film also generated some mainstream news coverage for its first-time director, Jennifer Yuh Nelson, as the first woman with a solo directing credit on a major studio animated feature.