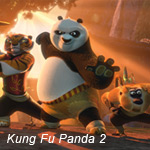 “Kung Fu Panda 2 is currently the fifth highest-grossing film of 2011 on a global basis and has exceeded $600 million at the worldwide box office to date,” said Jeffrey Katzenberg, CEO of DreamWorks Animation, in a statement. “We are looking forward to the next two big events for the company during the second half of the year: the Nov. 4 theatrical release of Puss In Boots and the release of Kung Fu Panda 2 into the home video market in the fourth quarter.”

In a conference call for investors, Katzenberg said Kung Fu Panda 2 lost about $20 million from its domestic box office sales by opening the same weekend as The Hangover, Part 2. The phenomenon, however, was present only in the domestic market and the film’s strong overseas performance keeps the film in the black and a valuable franchise.

In the call, Katzenberg said he had nothing to report on talks to renew the company’s distribution deal with Paramount in the wake of the latter’s announcement of its own animation division. He also didn’t comment on the company’s reported talks with Netflix.

You may also like...
Related Topics:Animation, DreamWorks Animation, financial results, How to Train Your Dragon, Kung Fu Panda 2, MegaMind, Netflix, Paramount, Puss in Boots, Shrek Forever After, The Hangover Part 2