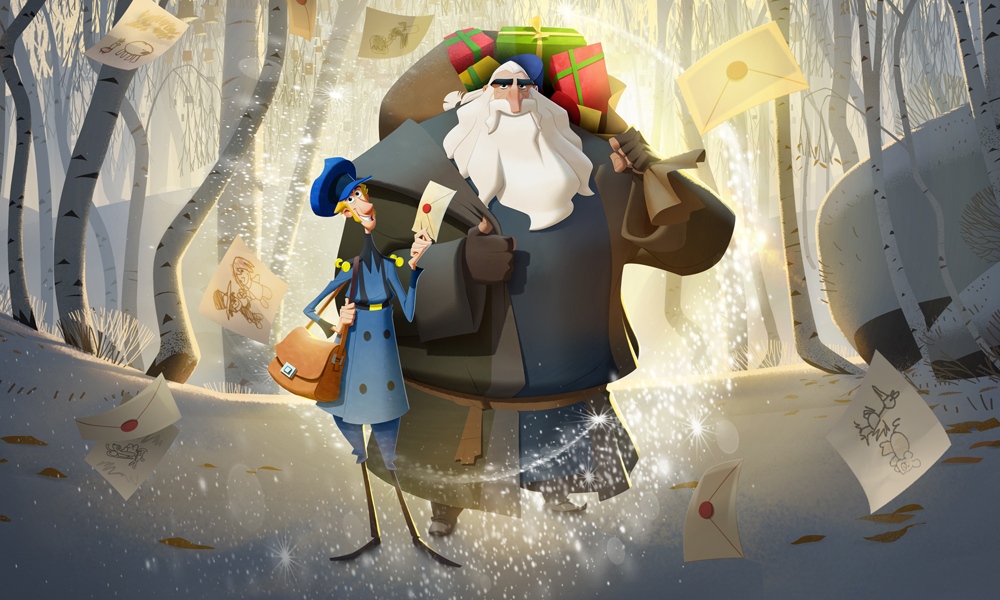 Nine years ago, veteran animator Sergio Pablos had a great idea: The world knows so little about the origin story of Santa Claus. Why and how did this legend of the big-hearted toymaker came to be? Pablos, a well-respected animator who worked on Disney’s Tarzan, Hercules and Treasure Planet, created the Despicable Me franchise and started his own studio (Sergio Pablos Animation) in Madrid, Spain, finally saw his vision come to fruition as the movie Klaus opened in theaters and premiered on Netflix in November.

Interestingly enough, Pablos actually decided to look into the origins of Santa Claus after seeing Christopher Nolan’s 2005 movie Batman Begins. “I really liked the way Nolan took the lore of an outdated character and made it relevant for modern audiences with Batman Begins,” says the helmer. “I thought it would be an interesting exercise to do a similar thing for popular characters from literature, folk tales and history. I considered Dracula and Napoleon — but, when I arrived at Santa Claus, I was surprised to discover that he didn’t have one single, widely accepted origin story. It was a mix of religion, tradition and lore, and each country had a different idea about him. So I felt that we had this great opportunity to try and fill in that missing chapter for him. And, if we could do it with a good dose of humor and heart, we might be able to create a true Christmas classic.” 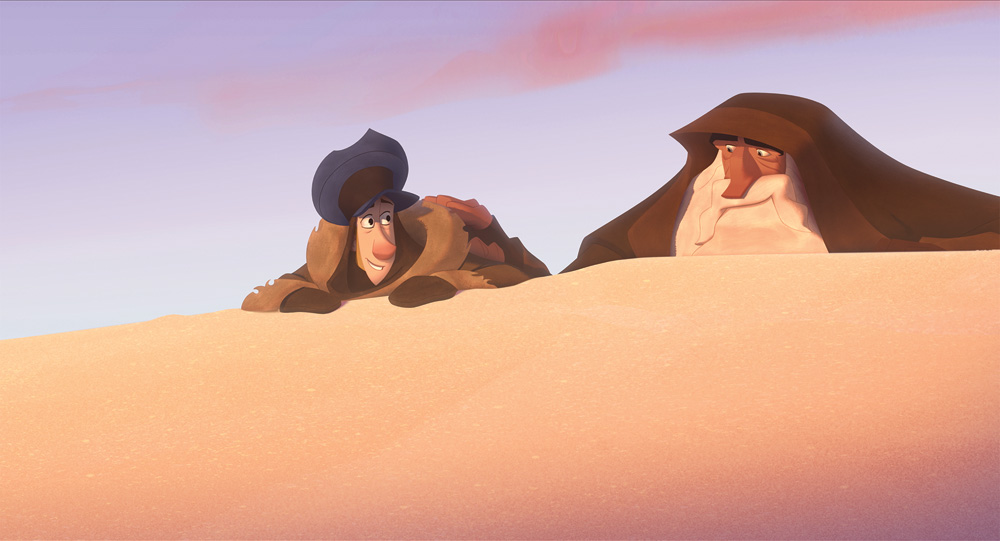 The result is a charming movie about the unlikely friendship between Jesper, the spoiled son of a rich postal academy head (voiced by Jason Schwartzman) who learns a lesson in human kindness and altruism after meeting a mysterious toymaker (voiced by J.K. Simmons) in the odd, faraway arctic of Smeerensburg. Along the way, Jesper teaches the feuding families of the town to reconcile, finds a romantic partner in the town’s frustrated schoolteacher (voiced by Rashida Jones) and forgets about his own selfish motivations. It’s a great story to take in around the holidays with the family, but what sets the movie apart is its rich 2D animation, stunning lighting and the memorable character designs by Torsten Schrank and impeccable production design by Szymon Biernacki and Marcin Jakubowski.

Pablos says one of his most important goals was to create a movie that not only looked unique, but also has its own sense of storytelling and tone. “It was very important to me that the film did not feel like it could have come out of any other studio, and that it had its own personality without losing the broad appeal that’s expected from a high-end holiday film.”

A Timeless Message of Generosity

As the film’s acclaimed producer Jinko Gotoh (The Little Prince, The LEGO Movie 2: The Second Part, Finding Nemo) points out, “One of Klaus’ major themes is the value of selflessness. That’s a universal theme that I think anyone in any age group can understand. What’s so beautiful about this is that, even though the movie is a Christmas story, it centers on such a powerful, universal theme that everyone can identify with.” 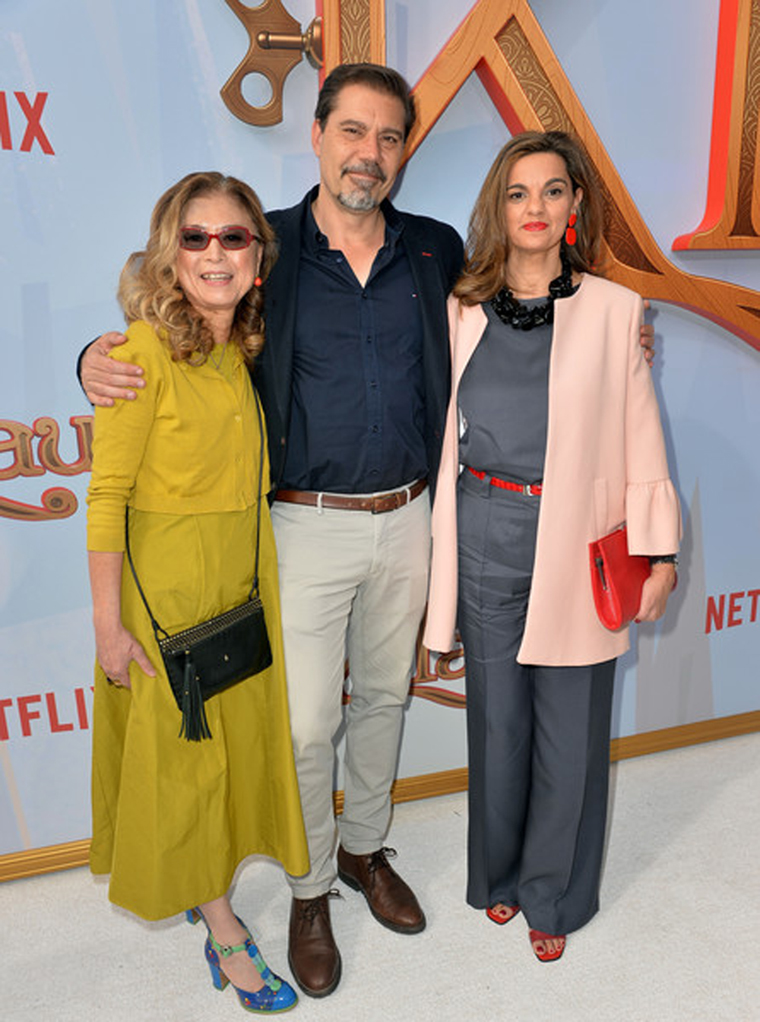 Among Pablos’ most important decisions regarding Klaus was to launch it as a state-of-the-art, traditionally 2D-animated movie, unlike any of the other projects coming out of the major studios these days. “As someone who’s always looking for the next great animated film idea, I’ve come to learn that these ideas have a strong voice when it comes to what they want to be,” he explains. “If you learn to listen, you’ll find that some ideas clearly lend themselves more to CGI, some to live action and, every now and then, you come across an idea that clearly would benefit from the organic quality that only traditional animation can bring. This was the case with Klaus.”

Pablos and his team of over 250 employees at SPA Studios were keen on picking up traditional animation where it had been left off in the 1990s, when Disney, Pixar and DreamWorks invested most of their creativity and innovation in developing a good-looking CG pipeline. “It was always the same pipeline and the same style, and it had stopped trying to evolve for a while,” says Pablos. “I always felt like traditional animation should keep evolving, it should keep being pushed forward. So. the aesthetic comes from discovering what we can add to the traditional animation pipeline by incorporating today’s tools, ingenuity and creativity to make it look different.”

The SPA team set off to discover new ways to advance traditional animation for audiences in 2019 and beyond. After carefully analyzing the 2D pipeline, they came to the conclusion that they could make great progress in the ways they used light and color in the movie. “We decided to create tools to allow artists to effectively add volumetric lighting to drawings,” says Pablos “We looked at many different approaches but, in the end, we decided to go for a hand-crafted approach, which fits beautifully with the rest of the traditional animation process.” 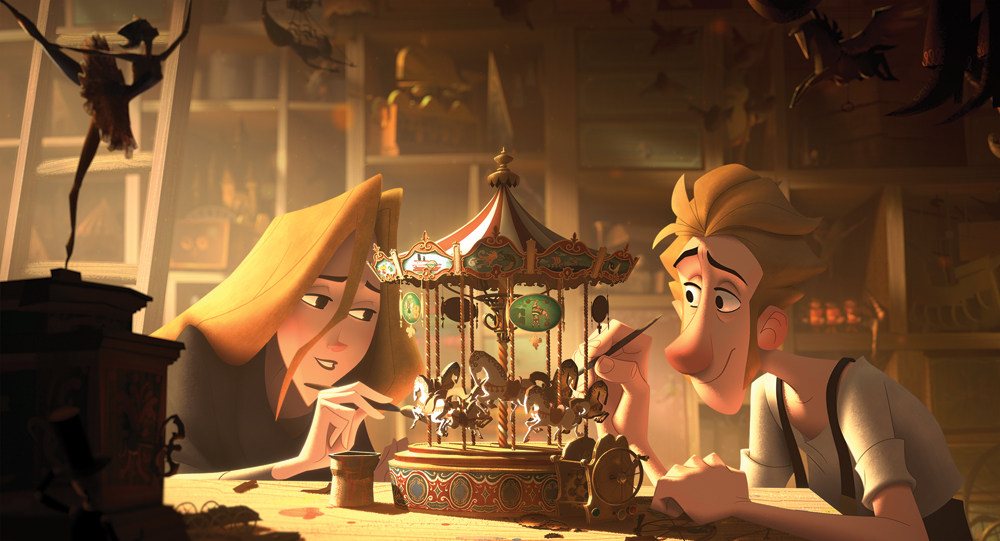 Let There Be Light

As SPA’s head of light & shadow Florian Aupetit explains, “What I love about this movie is that it finally combines two worlds, the world of illustration and the one of animation. Some attempts were made on short films, but it’s the first time I have seen this level of quality in an animated feature film. Our first challenge was to actually discover a new way to do the lighting on a traditionally animated movie. But, because the lighting on Klaus is a manual process, the goal was to keep consistency through all the sequences. On the surface, the lighting creates a bridge to smoothly blend the characters with the backgrounds, but it is also a powerful tool that supports the story.”

Aupetit, who counts Akira, The Incredibles, Breaking Bad and Apocalypse Now as some of the film’s sources of inspiration in terms of lighting, says nothing available on the market satisfied the needs of the feature, so the studio had to develop its own tool. “It’s a software with the philosophy of illustration, but adapted for animation. And the good thing is that the lighting artists don’t need to be animators — being just an illustrator is enough.”

As a result, unlike many other 2D animated movies, the characters and backgrounds look like they belong to the same world. “We’re used to seeing 2D characters looking like stickers put on painted backgrounds,” says Pablos. “I felt that we needed to feel like the same artists painted the whole world.” 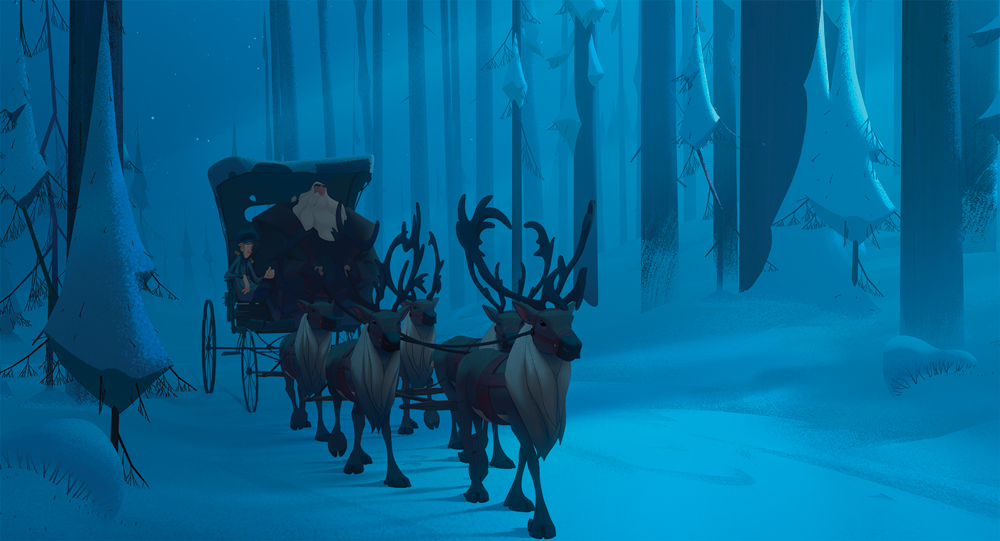 The director also mentions that, whenever he stepped into the production departments of studios in the past, he was always impressed by the stunning artwork created by all the different artists who work on the movie throughout the development process. “You see all this amazing art showcasing different sensibilities and styles,” Pablos notes. “But once they are put through the pipeline, the art gets ground down to a standardized style. That always nagged at me, that we weren’t able to put any of the eclectic artists’ styles directly on the screen.”

That’s why the artists and technical innovators at SPA created a new system that allowed them to put visual development art into motion on the big screen, while preserving the original styles and details. As he points out, “We found that the best way was to start from traditional animation and try and add all the right bells and whistles to get the visuals right. As we like to [say], we’re not bringing 2D back, we’re bringing it forward!” 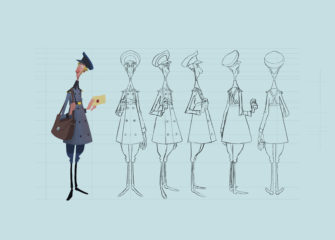 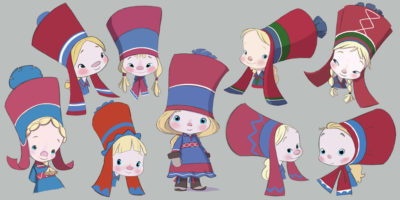 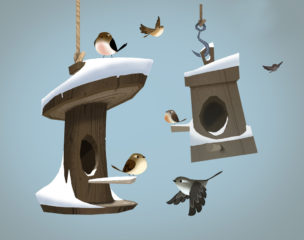 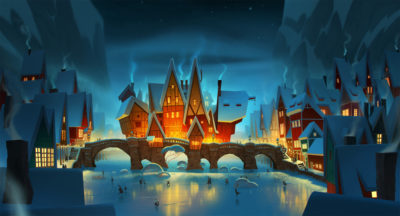 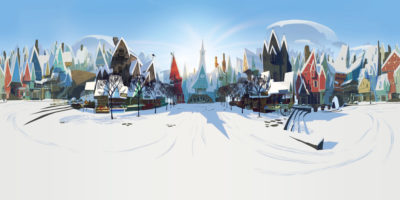 Producer Jinko Gotoh says she has been quite overwhelmed by the positive reaction of audiences at screenings. “I couldn’t be prouder of Sergio,” she says. “I know it sounds crazy, but I feel like the mother of a genius. It’s been quite moving to see audiences being moved by the movie from laughter to tears, just as we had hoped for. Our crew represented the most diverse group of people I have ever worked with. We had the best artists come from all around the globe (from 22 different countries), men and women between the ages of early 20s to 65-plus years old. We had almost gender parity, where women represented over 43 percent of the crew. Many of our team were young and had never worked on a movie. However, the biggest challenge was for production to understand what it takes to support Sergio as the director and his creative process.”

Pablos echoes his producer’s thoughts. “As you get closer to the ending, you tend to lose perspective, and you have to rely on people watching the film to see if things are working,” he explains. “Fortunately, every time we have had a screening so far, the reactions have been great: The lights go on and I see a sea of moist eyes, and that’s the best compliment. So I am overwhelmed by the response we’ve been getting.” 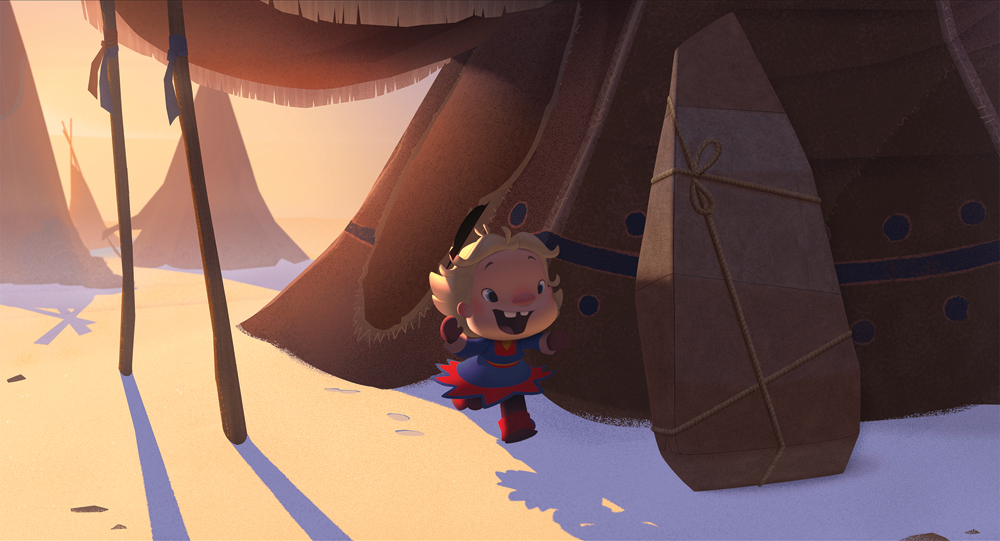 The director says although he has a deep fondness for traditional 2D animation, he doesn’t want Klaus to be a statement against CG animation. “What it all boils down to is that it doesn’t matter what medium you use as long as the format, the style is the best one for the movie and the story you are telling. You shouldn’t chase trends. Instead, you should make decisions based on what serves the movie’s ideas best.”

When asked about his take on the world of animation today, Pablos is hugely positive. “It has never been better for creators like me,” he responds. “I chose to go back to Spain after a long stay in California and then Paris, because I wanted to raise a family and keep the kids close to their grandparents. This could have never happened without Netflix. Our projects at SPA would get picked up, but they would get made elsewhere. Now we see so many more possibilities for creators all around the world. As a consumer/audience, I also get so much more exposure to films and TV series from all over the world. It’s a wonderful time for animation. Let’s hope it lasts a long time!”

Klaus is currently available to stream on Netflix worldwide. 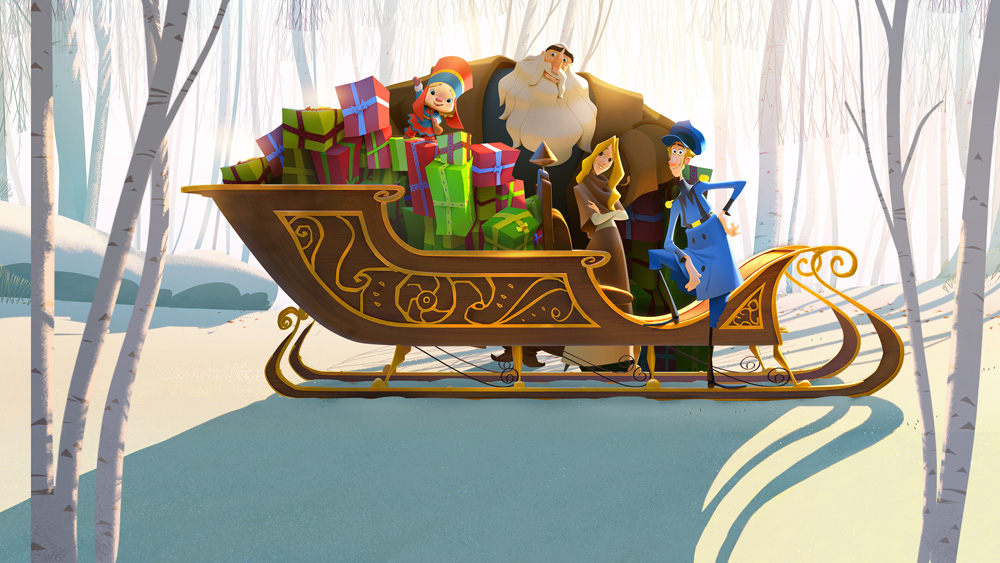