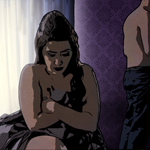 Kino Lorber has picked up rotoscope-animated festival favorite Tehran Taboo for distribution in the US and English-speaking Canada, with plans for a February theatrical release. The adult themed feature is a German/Austrian co-production directed by Iranian-born first time helmer Ali Zoozandeh, who lives in Germany.

Tehran Taboo had its world premiere during the Cannes Critic’s Week earlier this year, and was part of the official selection at the Annecy animation fest this summer. It will screen at the Vancouver Int’l Film Festival later this month.

The film unfolds as three strong-willed women and a young musician’s lives intersect in the Iranian capital, caught up in the contradiction between the city’s modern undercurrent of sex, drugs and corruption and the strict prohibitions of dogmatic religious rule. The characters’ search for happiness and freedom in spite of the repressive taboos that surround them have earned the film comparisons to Marjane Satrapi’s Oscar-nominated Persepolis (2007).

The film is produced by Little Dream Entertainment, co-produced by Coop99 and ORF. Tehran Taboo will open in Germany this November and in Austria via Camino Filmverleih and Filmladen, respectively.