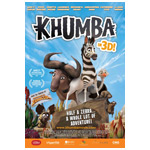 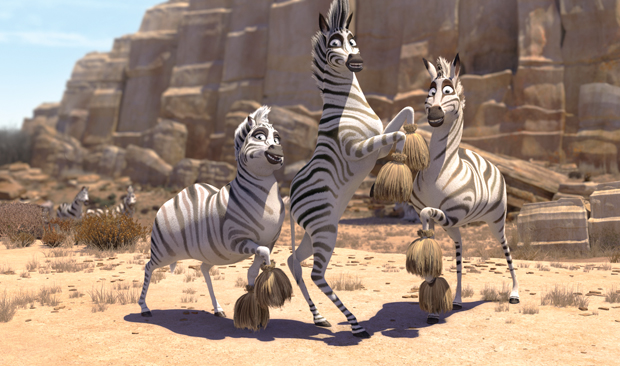 You don’t have to scratch too deeply to find the metaphors in Khumba, the second digitally animated feature film to come from South Africa’s Triggerfish Animation Studios. Even throughout the film’s amazing color palette, it’s all there in black-and-white.

“We grew up under apartheid and that was sort of subconsciously built into our stories,” says the film’s director Anthony Silverston, who also co-wrote the script with Raffaella Delle Donne (The Lion King‘s Jonathan Roberts was brought in for consultation). “Obviously, it’s a story about difference, whether it’s skin color or sexual orientation, or anything, and about overcoming that feeling of being inferior because you’re different. The black-and-white stripes is such a great metaphor for that because it’s a visual metaphor.”

Khumba tells the story of a half-striped zebra who has endured a lifetime of ridicule for being different, which leads to a more dangerous accusation from his herd (who all live in a segregated enclosure) that he is the bad omen causing a devastating drought. With encouragement from a mysterious praying mantis, Khumba (voiced by Jake T. Austin) embarks on a quest to find a legendary “magic” water hole in order to restripe himself. Along the way he meets a host of off-kilter friends and helpers (seventeen different species of animals endemic to South Africa are depicted), though to succeed he has to face off against a murderous leopard named Phango (Liam Neeson).

The Elephant in the Room

Despite its messages of diversity and bravery, Khumba should not be regarded as Invictus with ungulates. It may be a hero’s journey, but Khumba echoes Monty Python and the Holy Grail more than The Lion King, particularly through its gonzo supporting cast. There is even a good skewering of the clichés of racism through sequence involving a herd of gemsboks who “all look alike” so completely even they can’t tell themselves apart. But there is a second story to the film, one that is nowhere to be seen on-screen: its cost. Khumba was made for less (some whisper considerably less) than $20 million, roughly the P&A cost of a big-studio toon feature.

How can a high-quality digital film be turned out for roughly Pixar’s Hawaiian shirt-laundering budget for a year? “Instead of paying yourself $500,000 as a producer’s fee, you pay yourself $100,000, and you’re working over four years,” says Edward Noelter, Khumba‘s executive producer and president of Cinema Management Group, which is selling the film worldwide in thirty languages, and who was also a production partner in Triggerfish’s first feature, Zambezia. “That’s a real sacrifice these guys are making to build a nascent industry in South Africa.”

The name voice cast, which includes Steve Buscemi, Laurence Fishburne, Ben Vereen, Richard E. Grant, Catherine Tate and AnnaSophia Robb, made a similar sacrifice, many of them working for less than their going rate. “We basically get on our hands and knees and beg them to come on board,” Noelter says of star talent, “and when they see the quality of the animation and the message of the movie, a lot of them say okay, I can support that at a reasonable rate. This was a strategy we developed on Hoodwinked!”

For producer and Triggerfish CEO Stuart Forrest it comes down to spending the time and money being creative, rather than second-guessing yourself. “I think there’s an efficiency from the ignorance of not knowing how complicated things could get if we allowed them to,” he says. “Bigger studios have had decades to learn how difficult animated feature film pipelines can become, so they put all these safeguards in place that make it less difficult.” The youth of the studio’s staff also helped, he notes. “Our average age is 23, and for people who have just come out of college, their salaries are not as high as those who have been in the industry for 20 or 30 years.”

Neither to be discounted is the jump-off-the-diving-board philosophy of Triggerfish, which started in 1996 as a stop-motion commercial and short subject house. “We kind of threw people off the deep end,” says Silverston, noting that Quentin Vogel, a lead animator on Zambezia, was elevated to animation director for Khumba, while Daniel Clark made the leap from concept artist to production designer. But, he adds, “You don’t want to come across as doing work cheaper, we really see ourselves as doing quality work.”

Already released in South Africa (whose governmental film foundation has heavily supported it) and in other global territories through other distributors, Khumba will have an Oscar-qualifying run in L.A. in December and see its official U.S. release in early 2014 through Millennium Entertainment. Which leads to yet another inescapable message: the method of producing, distributing and marketing animated features is rapidly changing.

“I think the studios will struggle in the next 10 years to keep the strongholds they have in terms of how they can access audiences,” says Forrest. “The distribution industry is going through a shift that has leveled the playing field for independent producers.”