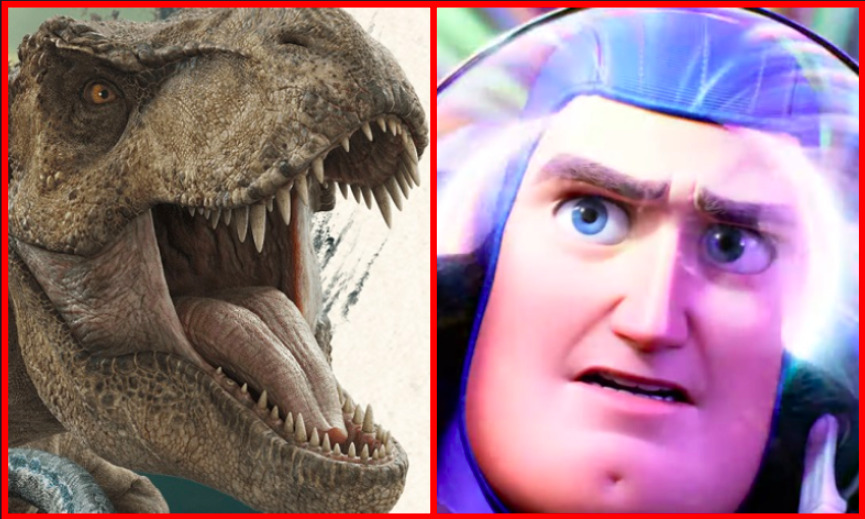 Jurassic World: Dominion and Lightyear took the number one and two spots at the U.S. box office this weekend.

The familiar dinosaurs of Jurassic Park Dominion proved to be a mighty rival of Pixar’s Lightyear at the box office this past weekend. Angus MacLane’s much-anticipated  origin story for Toy Story’s Buzz Lightyear ended up at the No. 2 spot with  an estimated $55 million for its four-day opening weekend from 4,255 theaters. Universal’s Jurassic World Dominion was the reigning champ with a $68 million for its four-day weekend and a $259.1 million take for its two week at the box office.

Industry watchers point out that the film failed to receive the unanimous raves from fans and critics often expected from Pixar movies and the Toy Story franchise. According to Rotten Tomatoes, Lightyear received a 77% rating from critics, while Toy Story and Toy Story 2 have 100 % scores, Toy Story 3 has a 98% score and Toy Story 4 shows a 97% ranking. Nevertheless, the film was given an A- scored by Cinemascore. Also, it should be noted that animated sci-fi movies are often a tough sell at the box office (see Titan A.E., Atlantis: The Lost Empire, Iron Giant), although Pixar’s own WALL.E was an exception to the rule. Lightyear is the first Pixar movie to premiere in theaters more than two years,  since Onward was released in March 2020.  Due to the pandemic, three of the studio’s acclaimed movies  — Soul, Luca and Turning Red — bowed on Disney+ and skipped theaters altogether.

Other industry experts question if Disney is relying too heavily on brand recognition and not enough on execution. It’s not that people disliked the movie, which landed an “A-” CinemaScore and 77% on Rotten Tomatoes. But Disney certainly hoped that more ticket buyers would feel compelled to see “Lightyear” in theaters over the weekend.

Here is a look at the rest of the animated and vfx-driven movies at the box office:

The next big animation showdown at the box office will take place on July 1st when Universal/Illumination’s Minions: The Rise of Gru opens nationwide. Also, be on the look out for Netflix’s The Sea Beast on July 8th,  Paramount’s Paws of Fury: The Legend of Hank on July 15th and Warner Bros.’ DC The League of Super-Pets on July 29th