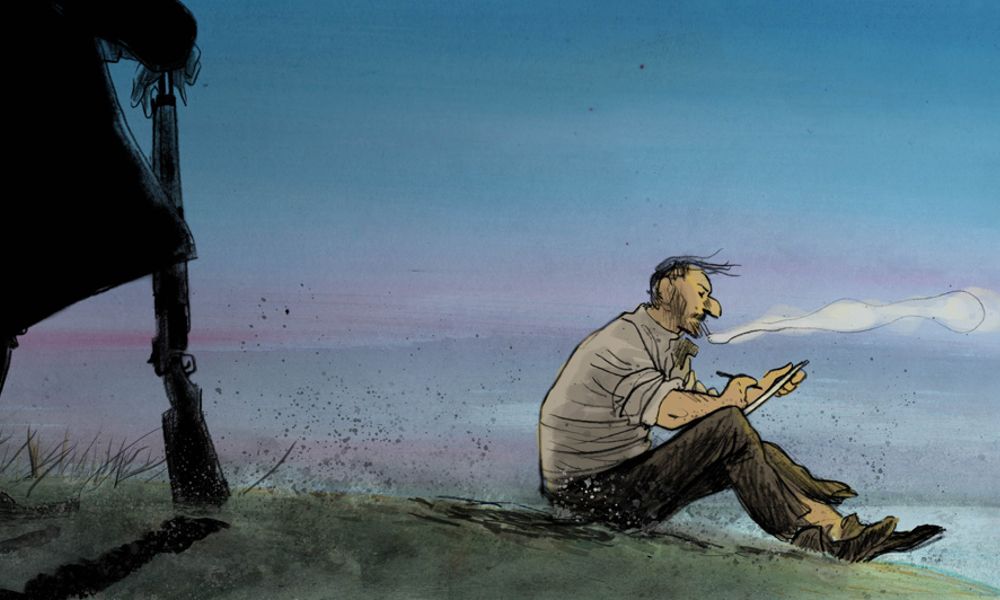 French cartoonist Aurel’s animated feature Josep is a powerful account of a pivotal chapter in the life of Spanish artist Josep Bartoli (1910-1995), who fought Franco’s regime, was interned in a French concentration camp and eventually made it to Mexico, where he became Frida Kahlo’s lover. The highly artistic movie was one of the Cannes Festival’s official selections last year and went on to win the European Film Award for Best Animated Feature Film (beating out heavyweights such as Klaus, The Nose and Calamity). The director was kind enough to answer a few of our questions via email.

“About 10 years ago, I came across the book La Retirada, which is written by George Bartoli, Josep’s nephew,” recalls Aurel. “This book is about the Spanish exiles in France at the end of the Spanish war in 1939. It’s illustrated by several of Josep’s drawings — including the cover, which is the first drawing I’d ever seen from him. Ever since I discovered his work, I knew that I wanted to work on his art and life story. I was actually making my first animated short project Octobre Noir (Black October) at the time and knew that I wanted to continue to explore animation through Josep Bartoli’s work and life.” 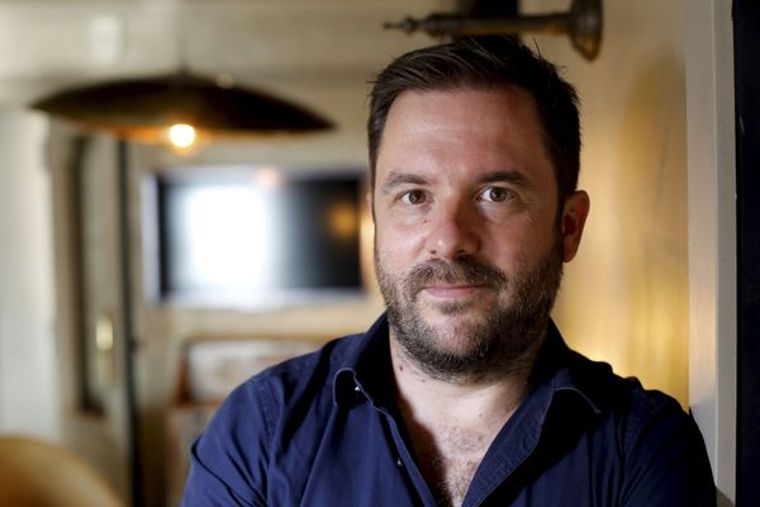 Aurel says he was passionate about Spain and the history of the Spanish Civil War, especially after seeing Ken Loach’s movie Land and Freedom, which came out when he was a teenager. “So, I think I saw the opportunity to join my two passions with this story,” he says. “However, the first few versions of the script (before the arrival of the screenwriter Jean-Louis Milesi) were really more biographical. I was totally obsessed by his fascinating life. Thanks to Jean-Louis, we brought the script to something more fictional and also stronger. Our biggest challenge was financing the movie. It took us two years even before the production began, and then about 14 months to make it.”

According to the director, most of the film, which was produced under the Les Films d’Ici Méditerranée banner, was produced in France: The backgrounds were produced by Lille-based Tchack, and animation and editing was handled by Angoulême’s Les Films du Poisson Rouge. Montepellier’s Les Fées Spéciales handled the compositing, while sound was done by Piste Rouge in Paris. Part of the animation was also produced by Belgium’s Lunanime and voices were recorded in Barcelona. (Noted Spanish actor Sergi López of Pan’s Labyrinth fame voices the film’s lead character.) In total, around 70 people worked on the project. 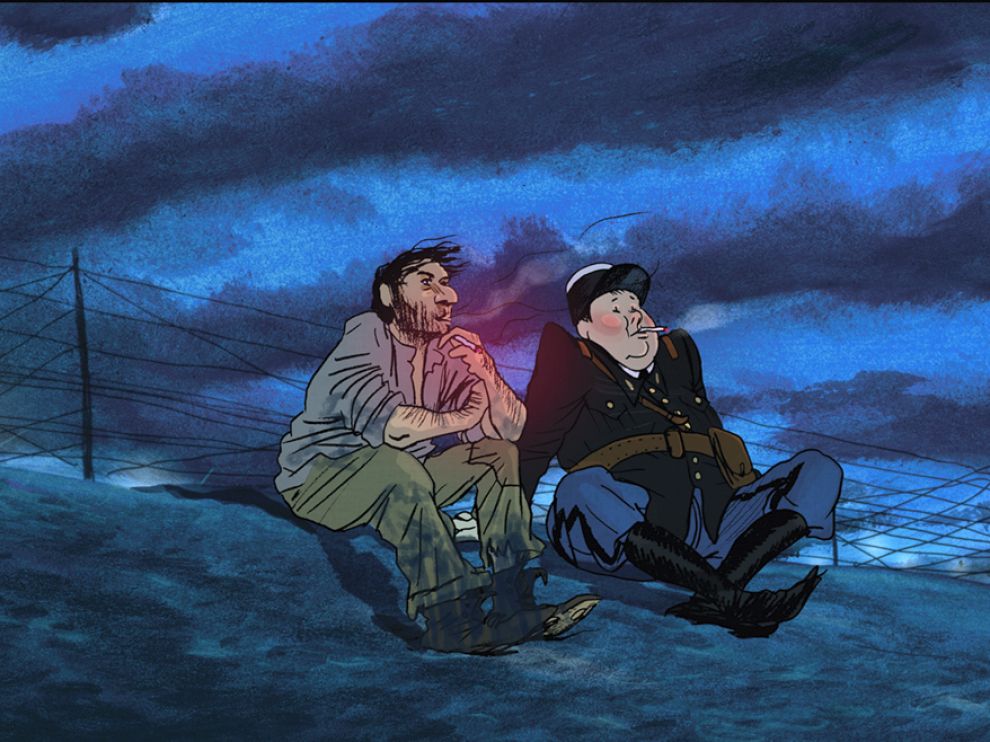 Through the Mists of Memory

Since the film is told through flashbacks, it needed two distinct visual styles: one devoted to the contemporary era, and the other representing 1939-era France. The director selected 2D animation created with TVPaint (produced by Lunanime) for the modern sequences of the movie, and for the historic sections he went with Poisson Rouge’s Hoodoo-produced animation. “I think it’s an amazing animation software, although I’m not an expert in animation,” he says. “It’s a vector-based drawing software which you can use with your own drawing tools (i.e. my own pencils and ink brushes, etc., from my pencil case). Every line an animator drew in the software is mine thanks to a library filled with lines I had drawn before and scanned. Plus, Hoodoo helps animation by offering intervals to the animator … directly picked-up from my lines library. Obviously, the animators can modify every image. It brings a real handmade quality to the animation.”

Aurel says the reason he decided to opt for a different kind of animation for the period sections of the film was two-fold. “The story is told by an older man to his grandson, so it’s based on a dying man’s memory,” says the artist. “We can imagine that it’s not very fluent and more impressionistic. We also need to feel that it’s the first time he is telling this old story.”

The second reason is quite personal and heartfelt. Aurel explains, “This was very important to me because this movie is an homage to both my art and Josep’s art— and that means drawing, and more precisely, cartooning. It means we use this art to express movement without any motion. We express acting without any action. We only draw. And our drawings need to be read very fast and to carry all the action and the meaning in a few lines. I wanted to bring this to cinema. So I decided to realize this historical part through this method of drawing, which involved taking out every ‘interval,’ every action that could be resumed in only one drawing. That is what you see on the screen. That matches quite well with the idea of a fading memory. Of course, the response from production was, ‘OK, but we don’t know how to do that, so help yourself …!’ So, that’s why I had to draw the characters featured in the entire 800 shots!”

The director praises his producer Serge Lalou for supporting all his artistic choices and sticking up for his special vision. “I’m really glad to have been totally free to stick to my artistic choices, even when it was about taking out most of the movement from the movie! Thanks to Serge, I could think and make a film entirely as I wanted to. The most exciting part of the experience was to bring life to my drawings, keeping their essence, but also adding voices, music, special effects, etc. to the project.”

A Fan of Looney Tunes

When we ask him about his artistic influences and favorite animated projects, Aurel says, “Darn, that’s a trap! I don’t know! As every French (and European, I guess) person from my generation, cheap Japanese manga animation was a huge part of my culture because of TV shows I used to watch! As a child, I also loved a French production called Il était une fois la vie… (Once Upon a Time… Life) [Procidis’ children’s show about the human body]. But I am definitively a huge fan of classic Looney Tunes and Hanna-Barbera shows. For me, Tweety and Sylvester and The Road Runner are at the top of my pantheon. More recent favorites include The Simpsons, obviously, and American Dad!”

The veteran artist says he hopes audiences will learn more about a lesser-known period in French and Spanish history thanks to the movie. “I think what viewers will take away from the movie will be different, depending on where they are from,” he points out. “In France, I hope it will help to educate people more about this part of our history, which is totally erased from the books. In general, I hope Josep is a kind of manifesto and tribute to the art of drawing. I mean I want the movie to show how drawings can be powerful and evocative — even without any or a lot of movement. Even in cinema.”

When it comes to the world of animation, Aurel says he is pleased to see a lot of interesting and daring works being produced all around the world. “I’m glad to see that because of animation, drawing is playing a huge role as an art form, and that the medium can be used to tackle serious subjects for adult audiences today.”

2021 PreVIEW Kicks Off with Trio of Free Online Sessions
‘Momma Named Me Sheriff’ Back on the Beat Feb. 14