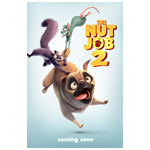 Award-winning actor Jackie Chan has signed on to voice a fuzzy but fearsome Kung-Fu master mouse in The Nut Job 2. The film also features the voices of Will Arnett, Katherine Heigl and Maya Rudolph, and will arrive in theaters via Open Road Films on May 19, 2017.

A sequel to the highly successful family toon The Nut Job — which achieved the biggest ever box-office opening for an indie animated feature and surpassed $120 million worldwide — The Nut Job 2 follows Surly Squirrel and his ragtag grou of animal friends as they band together to save their home of Liberty Park from the evil mayor of Oakton and his bulldozer plans.

Chan will voice Mr. Feng, the highly territorial leader of a gang of city mice. Beneath his cute and friendly exterior beats the heart of a fierce and menacing Kung-Fu master, determined to protect his turf from all trespassers.