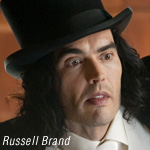 Moviegoers this weekend will get to decide if they prefer animation or live action when it comes to British comic actor Russell Brand.

The star of such comedies as Get Him to the Greek headlines the new release Arthur, which opens at about 3,200 cinemas this weekend. He also provided the voice for the lead animated character in last week’s top film, the Illumination Entertainment release Hop.

Hop handily topped the box office last weekend and has potential to hold over well with family audiences as Easter this year falls on April 24.

Other wide releases this week include Universal’s pot comedy Your Highness at about 2,800 cinemas; Focus Features’ adventure film Hanna at about 2,500 theaters; and Tristar’s sports drama Soul Surfer in about 2,200 theaters.

Also still in release are the animated features Rango and Gnomeo and Juliet, and visual effects-driven films Sucker Punch and Battle: Los Angeles.