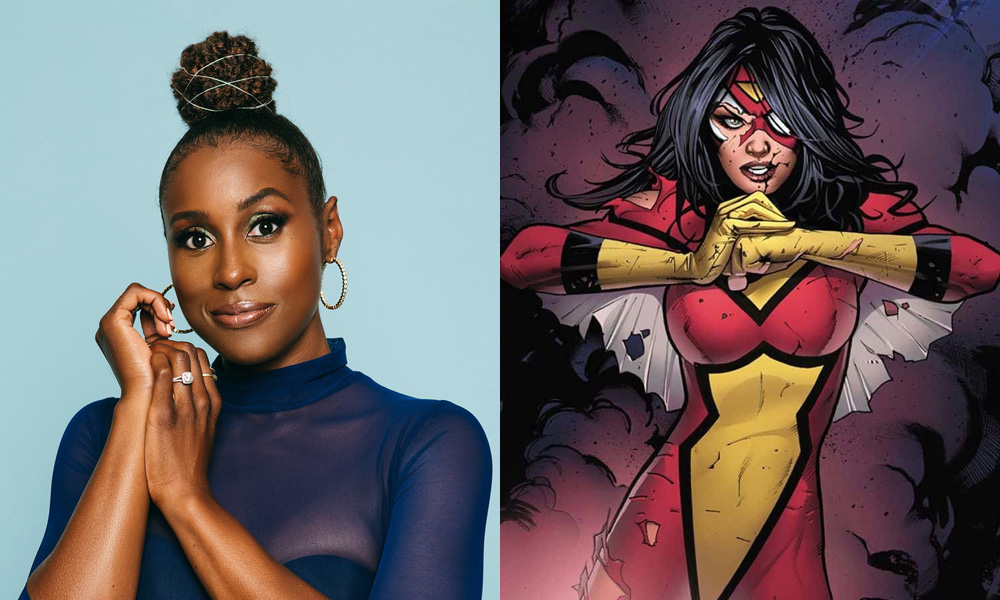 Emmy- and Golden Globe-nominated actress, writer & producer Issa Rae (Insecure, Black Lady Sketch Show, The Hate U Give, Little) has been cast as Jessica Drew/Spider-Woman in the upcoming sequel to Sony Pictures Animation’s award-winning 2018 feature Spider-Man: Into the Spider-Verse, according to The Hollywood Reporter. Following the reveal on Friday, Rae shared to her Instagram stories (@issarae): “The way I have loved Spider-Man since the third grade. A dream come true.”

Rae is the first new cast member confirmed for the second Miles Morales adventure, joining returning stars Shameik Moore (Miles/Spider-Man) and Hailee Stanfeld (Gwen Stacy/Spider-Woman). Jessica Drew, the first Spider-Woman, was introduced by Marvel Comics in a 1977 issue of Marvel Spotlight and web-slinged into her own comics. The character was a key part of the 2014 Spider-Verse comics event, spinning into 5th and 6th volumes of Spider-Woman.

An NAACP Image Awards and Black Reel Awards winner (among other accolades), Rae’s previous animation roles are a dual performance as the natural hair vlogger and mom in Oscar-winning short Hair Love, which was picked up for theatrical release by SPA, and played Dr. Indira in Netflix’s BoJack Horseman.

Spider-Verse 2 plot details have yet to be revealed, but the follow-up will continue to draw on the many multiverses of Spideys from across Marvel’s many worlds. As previously announced, the new pic will be directed by Kemp Powers (Soul), Joaquim Dos Santos (The Legend of Korra) and Justin K. Thompson (production designer on Spider-Verse) — the latter both making their feature directorial debuts. Returning producers are Phil Lord and Chris Miller, Amy Pascal, Avi Arad and Christina Steinberg, alongside co-producer Alonzo Ruvalcaba. Exec producers are Peter Ramsey and Aditya Sood. Lord, Miller and David Callaham are also exec producers as well as writers.

Spider-Man: Into the Spider-Verse was warmly received by fans and critics, earning a worldwide box-office of $375.5 million and surpassing Hotel Transylvania 2 as SPA’s highest-grossing film domestically in 2019. Among its many accolades, the pic directed by Bob Persichetti, Peter Ramsey and Rodney Rothman won the Best Animated Feature honors at the Golden Globes, Critics’ Choice Awards and Oscars (the first non-Disney/Pixar flick to win the Academy Award in seven years). Development on the sequel began before the first film premiered due to the “incredible buzz” around the project.