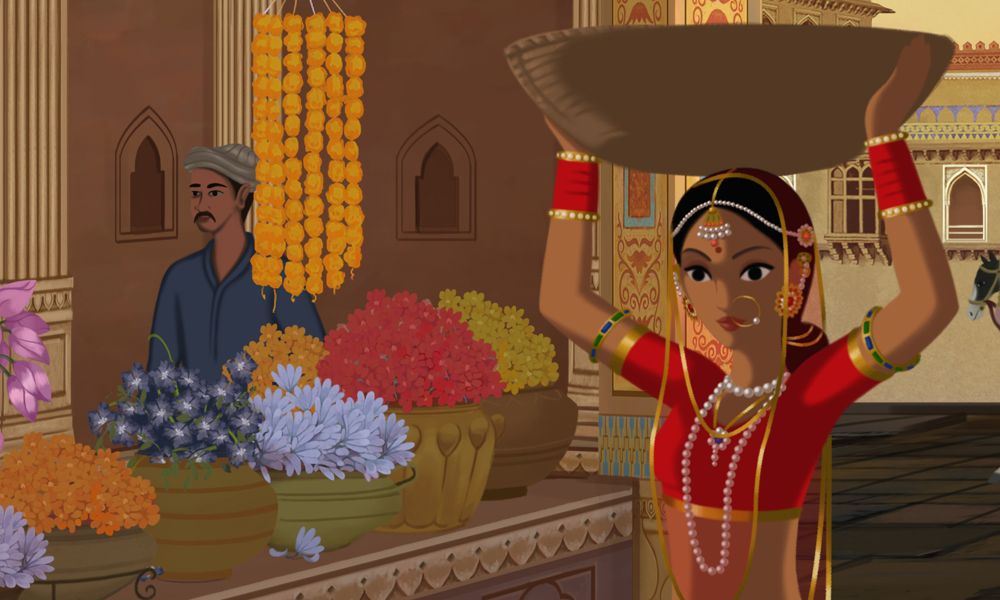 Gitanjali Rao’s exquisitely crafted debut feature Bombay Rose is hailed as one of the year’s most inspired, original and colorful animated offerings. The hand-painted feature, which reportedly took about six years to complete, is infused with the sights and sounds of Mumbai and chronicles three very different tales of the heart. After making a splash at the Cannes, Venice and Toronto festivals last year, Bombay Rose premieres on Netflix today, marking International Women’s Day. We had the chance to speak with Rao, who wrote, designed, edited and directed this feature. Here is an edited transcript of our conversation: 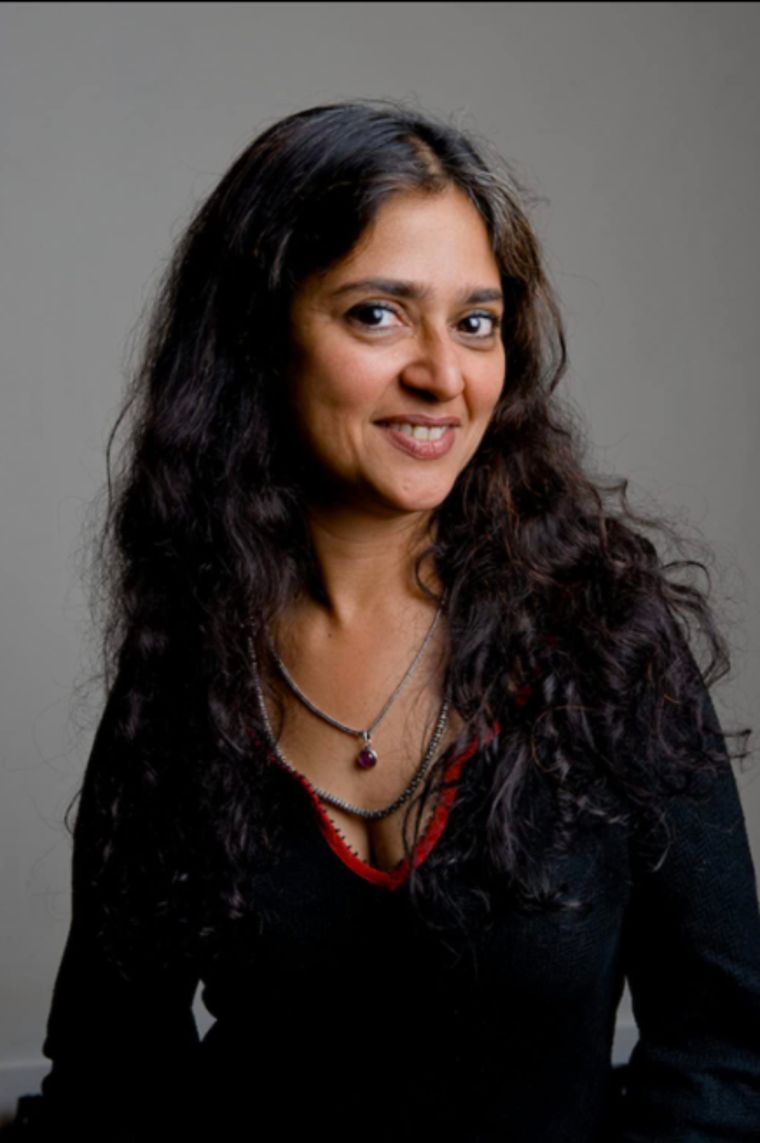 Animag: First of all, big congratulations on the release of your wonderful feature. Can you tell us a little about the development history of Bombay Rose?

Gitanjali Rao: I had an idea for a film six years ago. It was a different one, and I didn’t find the finances for it. Girgit was about three migrants to Mumbai, and was six months into production before being abandoned. I took one idea from that to make the short film, TrueLoveStory, which was shown at Cannes in 2014. I also took some ideas from another unfinished film, Shadows of the Mahabharata, especially the folk art style. In 2016, I found the French producers Les Films d’Ici and they decided to support the film. By 2017, Cinestaan, an Indian film company based out of the U.K., had also come on board. The pre-production process took 18 months.

Pre-production in animation is very specific, and is about making a dummy film, really — bringing together the screenplay, the animatic (the animated storyboard), the design and look and feel of the characters, the colors and concepts, the scratch voices. The rough cut of the film becomes its blueprint. This blueprint can often take longer than the production itself. Once this was done, I approached Mumbai-based Paperboat Animation Studios to make the entire production of this frame-by-frame painted film!

How did you come up with the folkloric, distinctive and highly original animation style and designs of the movie?

In Bombay Rose, since I had the luxury of a long format, my characters move seamlessly into their dream worlds from reality. I use different art styles that I have been drawn to and inspired by, but essentially belong to the character’s place of origin and culture, to enable them to escape into their dream or what might have been a reality ages ago.

The film has four styles that seamlessly merge into each other. The reality is constructed in an impressionistic style, characteristic of my earlier short film TrueLoveStory. But within that, I go into the mindscape of my protagonist Kamala, who hails from Madhya Pradesh, using the Kangra miniature painting style. For Salim, the hero of the film who hails from Kashmir and is a truck driver’s son, I used the truck-art style of Pakistan. The other important character in the film is an Anglo-Indian woman who used to be an ‘extra’ dancer in Hindi films from the 1950s, so for her my style changes into the black and white vintage style of an older Bombay.

What were your biggest sources of inspiration for the movie?

I have often traveled across Bombay as a student, then when working at different studios … in buses, trains, autos and taxis. Traffic congestion would ensure one spent hours and hours in these travels. In those days before smartphones, one looked out of the windows to see life spilling out of the streets. Even today, I feel Bombay is a city that (as a dweller) passes you by more than you live in it. I would see young girls and boys selling flowers and flirting and wonder how they express their love coming from different states, speaking different languages with only Bollywood as their reference to express love. Somewhere in these travels within Bombay and outside in the rest of India, I found the story of my protagonists Kamala and Salim. In a city which they literally build, clean and construct, they have no citizenship and are vulnerable to the dangers of poverty and exclusion yet they cannot leave or go back. Their life and their spirit of survival drew me to their stories.

Why do you think animation was the perfect medium to tell your heroine’s story?

In all my films, reality proceeds into the imaginary world of the characters. Be it Orange, where the woman’s spirit takes on the form of a butterfly, or Printed Rainbow, where the matchbox is the trigger for the old woman’s fantasy — even in Chai, where I transit from live action into animation to bring alive the lost world of the characters. Similarly, in TrueLoveStory the fantasy world of Bollywood is the protagonist’s escape from reality. The audience is wont to expect something beyond reality when they watch animation. However, unlike conventional animation films, my dream worlds are fantastical in the psychological way, not just in space and time. I do not make fantasy creatures or an unreal world: I simply recreate the time and world as it must have been in times of peace and beauty, more like an inner world of the mind and soul.

Did you face a lot of challenges as a woman auteur working in animation?

Animation, the kind I do, is very niche in India and there isn’t yet money or power enough for the gender parity to be evident. Most of my challenges are common to filmmakers of both genders, such as financing, etc. Apart from that, since not even men have ventured to make the films that I have, I have nothing to compare to. But another fact is that more than 37 percent of the team of Bombay Rose is composed of women, specifically in lead roles like direction, executive production, production design, etc.

Where was the animation produced and which animation tools did you use?

In a studio in Mumbai called Paperboat Animation Studios. The entire film was made in Adobe Photoshop, Flash and Adobe After Effects. Nothing very complicated.

How many people worked on the movie?

We started with 20 artists and then expanded to about 80 in the final six months.

Was it disappointing to have the movie come out during the pandemic, when many people cannot enjoy the film’s vibrant colors and beautiful images on the big screen?

It is far less disappointing what has happened to my colleague’s films that have been completed this year! With a year like 2020, it would be foolhardy to not feel positive about a release — any kind of release. I am not greedy!

What is your take on the Indian animation industry?

It is tough being a non-commercial filmmaker in India. There is no state support. The big players in the industry and markets are not interested in us — unless we make children’s films. Not just India, this conception is prevalent even in the West when it comes to commerce. It is the release strategy that has proven that children make the largest audience for animated films, therefore, the market is uninterested in other types of animation. Bombay Rose works perfectly for children, young adults as well as old people. Contemporary themes are interesting to everyone if told in a way that engages them as well as entertaining them.

Sometime during the end of my time at art school, I watched European animation in film festivals and especially fell in love with Polish and Eastern European styles of animation back in the ’90s. Jerzy Kucia’s films actually made me decide to take up animation as a powerful medium of emoting through movement. I have always wanted to paint as well as tell stories, so, since the two come together in animation, that became my voice.

Do you have any advice for other women who want to break barriers in the animation industry?

The fact that a woman, any woman, wants to break barriers in any industry itself means she needs no generic advice from other women. Generic advice is a bore — but yes, give me a bunch of women from the industry over a drink and we’d all have lots of advice to give to each other in a mutual, not exclusive, way!

Bombay Rose is available to stream on Netflix.

For more info on the director, please visit gitanjalirao.com.