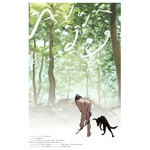 Companionship between humans and animals is an oft-explored concept in the film world, no less in the animation realm. But one of this year’s Best Animated Short nominees seeks to breathe new life into an old trope: MInkyu Lee’s digital 2D fable Adam and Dog, set in the Garden of Eden and exploring the genesis of an age old communion.

“I didn’t want Eden or this dog’s relationship to Adam to be portrayed in a way that felt contrived or too plot-driven,” says the director. “I really wanted to focus on conveying the sense of peace in Eden, and also that sense of breath, and the purity of life there. I think breathing room is such an important thing for a character to feel truly alive. Just letting the characters be who they are.” 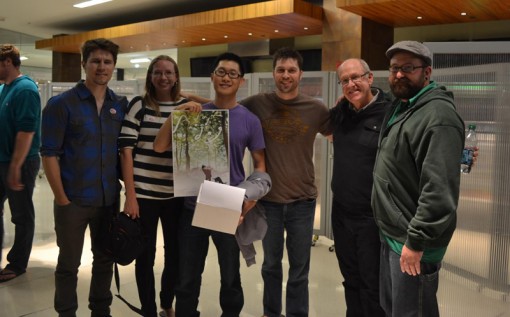 Adam and Dog helmer Minkyu Lee and his team celebrate the short’s success.

Lee, who was fascinated by animation from a young age, lists his idols as toon legends Glen Keane and Yuri Norstein, and his favorite example of the art form is Disney’s Pinocchio. But for this project, the film buff also drew on the works of directors Andrei Tarkovsky, Terrence Malick, Sofia Coppola and Jean-Luc Godard.

“I’d sometimes choose the shots in a more conventional way, and immediately something would feel off or lost. And then I’d watch a Godard film and think, ‘Wow, what a great feeling of liberation! I can do anything I want with film!’ And it would always help me think outside of the typical restrictions of familiar storytelling,” he recalls.

The 27-year-old, Korean-born artist, who also produced the short, says the idea came from a writing exercise he did while enrolled in CalArts’ M.F.A film directing program. Toward the end of 2009, he began working on bringing his concept to life, devoting his off hours and weekends to the project for about two years before taking leave from work to devote six months to its completion. A small but loyal army of talented animator and artist friends also spent their nights and weekends volunteering their services, animating from their home set-ups primarily in TV Paint; some work was also done on paper. Since the crew was gratis, Lee’s main costs were for equipment, software, printing and other miscellaneous elements; he estimates these cost between 10 and 20 thousand dollars.

One of the highlights of the production for Lee was the involvement of legendary Disney animator Glen Keane, who served as a guide and mentor for the crew. Lee recalls that the revered artist was very interested in the project from very early in the process, and the two began meeting to discuss the film frequently after that. In addition to reviewing the animators’ work, Keane was an invaluable guide for Lee in developing the story.

“Glen has this wonderful gift to see deeper into a piece of art, or a moment, or a story. He can see through it, and discover the core of it,” the director explains. “When I first pitched him the story, he said to me that it really felt like a story of ‘grace’—a grace that was given as a gift to mankind. And when I heard that I just went, ‘That’s it! I know that that is what my film is about.’”

While Keane’s impressive resume (Disney’s Tarzan, Pocahontas, Aladdin, Beauty and the Beast and The Little Mermaid among others) came in handy, Lee was blown away by how dedicated to the project Keane proved himself to be.

“Once, we had decided that he would animate this scene in which Eve meets these fawns. And we kind of talked about what that scene could mean for the film, and how the action would play out,” Lee remembers. “The next day, he came into work with this huge stack of drawings! And the drawings were him searching for the design of the fawns, of Eve holding them, how they would walk, how she would interact with them…He told me that that night after being handed the scene, he had dreamed of these fawns, and he woke up in the middle of the night, and couldn’t go back to sleep because he was so inspired by it, and just went straight to the drawing board.”

Another morale-boosting moment came after the film’s completion, when Adam and Dog took home the 2012 Annie Award for Best Animated Short last February—beating out major studio heavyweights for the honor. Lee’s excitement about the recognition is still plain almost a year later, and he notes he was especially pleased to be able to share the night with his friends/crew members who got to see their hard work pay off. For Lee in particular, the Annie win has opened doors to getting more of his stories out of his head and onto screens by putting his name in front of TV and film agents. 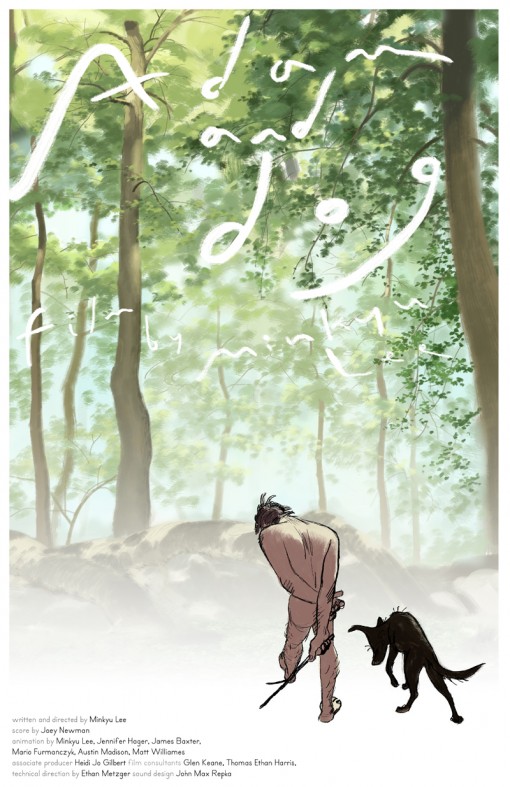 In fact, Lee shares that he already has a variety of concepts in various stages of development for TV, film, books and graphic novels which he is working on, in addition to spending his days as a visual development artist for Disney’s feature animation department and teaching 2D Character Animation at his alma mater, CalArts. Who knows—after experiencing the restful beauty of his animated Eden, you might almost have the energy to keep up with this rapidly rising star.

For more information about Adam and Dog, visit adamanddog.tumblr.com.