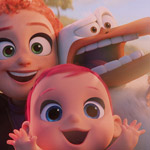 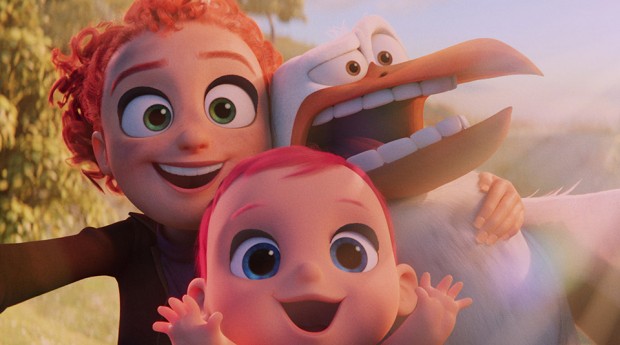 The makers of Warner Bros. Animation’s Storks tapped into the improv skills of its voice actors and animators to find the right tone.

In the world created in the new film Storks, the economy has been tough on everybody — especially storks in the delivery business.

Though they once only dedicated to delivering babies for as long as any of us can remember, storks found they could increase their bottom line by moving into the delivery of other items in an Amazon-style business move. But there’s just something about bringing babies to their new families, and when a yuppie stork in the new film Storks accidentally reactivates the company’s allegedly defunct baby making machine and creates an accidental and ridiculously cute baby girl, the future of the company and all the storks spins into a chaos spiral.

Written by veteran comedy writer-director Nicholas Stoller (Get Him to the Greek, Forgetting Sarah Marshall) and then directed by Stoller and animation ace Doug Sweetland, the Storks story originated from a very personal aspect of Stoller’s life.

“Our first child was really easy to have and our second child was really hard to have and we had a lot of fertility struggles so it made me understand the blessing that children are,” says Stoller. “That’s at the heart of it really, even though every iteration of the movie went farther from that story.”

After working in live-action R-rated comedies, Stoller had remind himself he could do anything at all in animation because of the tools and that he could do it on a much larger canvas. But he still brought in some of the sharpest improv comedy talents to round out his cast. Andy Samberg plays Junior, the lead stork in quest of company advancement, Keegan-Michael Key and Jordan Peele play a pack of not-so-scary wolves, Ty Burrell is the voice of a distracted father and Jennifer Aniston is the voice of his real estate obsessed wife.

Sweetland is quick to point out that Stoller used improv techniques more than he’s ever seen in an animated film. And this made for dialogue that seemed more natural, spontaneous and funny.

“Katie Crown (the voice of Tulip) was originally hired as a scratch actor but she came in there’s a scene in which she’s basically talking to herself in multiple versions of her character and she showed she’s really irreplaceable in that character,” says Sweetland. “The studio recognized her talent and she got to keep the role so our movie really is closer in tone to an SNL skit or a Christopher Guest movie than anything else.”

Stoller would also pitch ideas to the animation team – including one in which a team of nefarious penguins attempt to steal the baby girl Junior created. Stoller essentially gave the team the impetuous for the scene and then let the team carry it out, explained Sweetland.

As our heroes attempt to bring the baby they accidentally created to her intended parents, they also run across a pack of hungry wolves. It turns out the wolves — once they are taken in by all the qualities of the baby — are mostly hungry for the love of the child and not her flesh. The entire pack of wolves is voiced by Key and Peele and much of their improv rounded out the personalities already written into the script. Joshua Beveridge, animation supervisor, knew the wolves were something special early on in the process.

“Warner Bros was always very clear with us that they wanted the wolves to be something they could brag about and something that was very impressive,” says Beveridge. “(The wolves) were always in the script as a wolf pack and coming together in the form of all the shapes that you see — the bridge, the boat, the broken heart.”

Beveridge also thinks the simple style of animation in the film works in its favor — making way for the audience to project itself into the action and giving the action of the film a more wacky, comical Looney Tunes kind of feeling.

“It forces everyone to remember this is a cartoon and this something fun,” says Beveridge.”It needed to be silly, which means we had to art direct it and we had to invent some new tricks and tools to pull it off, and it was on the backs of the animators.”

Animators started by doing 2D animation of all the wolf action at first in order to get a sense of what would work and what needed to be changed. Once approvals were in place, they moved forward. They also spent a lot of time putting together action that would make logical sense because it turned out to be the funniest way for wolf scenes to take place.

“We reverse engineered how many wolves we would need for the bridge,” says Beveridge. “It turns out the funniest thing was also the most believable thing, so we got to invent in animation the shape of the bridge that would be made by the wolves stretching themselves across the ravine.”

Wolves and Babies and Storks, Oh my!

But it wasn’t just the work on the wolves that proved a special kind of challenge. There were also hundreds of babies and storks to create. The babies would have to have that special something that makes us all reflexively say, “ Awww.” And the storks needed a wing that can fold and be a hand as well as many other things.

“I have a whole sketch book filled with ideas of how we could do the wings as hands, so they would be pliable and do so many things,” says Beveridge. “ It is a world where birds don’t have to have feathers to be a bird.”

Stoller and producer Brad Lewis point to the cinematography and art direction of Storks as two things that contribute to the unique look of the film as well. Part of the unique look of the film, they gave the audience a sense that this is a place meant not to be taken too seriously. This was important to Stoller as the film was never meant to be scary so that young children could watch and become immersed in the story. For this reason, they wanted a look that was more simple than specific and more over the top and playful, which is a turn away from animation that is so technically accurate you get a look at every little detail of every creature in any scene.

“At one point Nick (Stoller) said our movie should have a hand held feel and our director of photography Simon Dunsdon was all for it,” says Stoller. “So we had a whole post camera process that basically added this sense that the action was being followed live which is a subtle thing that cues that we’re following something that’s improvised and that really reflects Nick’s improvisational background.”

Finishing Strong
10 Toons Not to Miss at MIP