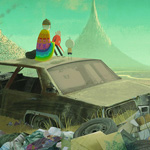 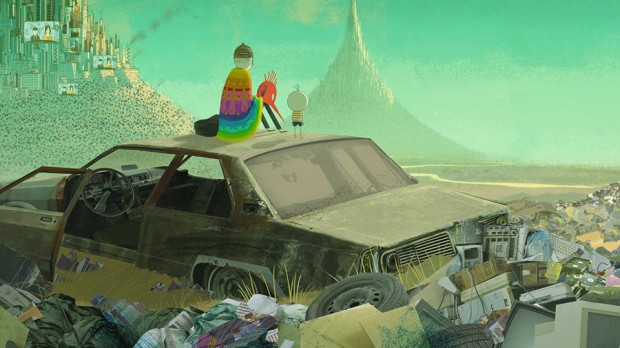 Ale Abreu’s animated Boy & the World one idea at a time, creating a popular political powerhouse of a movie that has a good shot at an Oscar nomination.

Boy & the World is the kind of feature that proves some ideas can only spring to life via the wide-open creative canvas of animation.

The brainchild of Brazilian animator Ale Abreu, Boy & the World debuted at the 2013 Ottawa Animation Festival, and has since racked up such impressive awards as the Cristal Award and Audience Award at the 2014 Annecy festival. Now its come to the United States for a limited theatrical release via GKIDS and is in serious contention for an Oscars nomination.

Boy & the World tells the story of a boy who sets out from his small village home and searches for his father in a world that is at times soul-crushingly cruel and at others beautiful and magical beyond words.

Abreu wrote, animated and edited the dialogue-less film mostly himself, often creating the film on the fly.

Starts With a Sketch

Interviewed via email through a translator, Abreu says the project began when he was working on Canto Latino, an animated documentary project exploring the history of Latin America through its protest songs. He was flipping through his sketchbook and saw a drawing that stood out in an unusual way.

“What attracted me, more than the actual character, was the simple, rough and urgent way I’d drawn him,” says Abreu. “The feeling I had was that the boy in the drawing was waving at me, calling me to discover his story.”

Abreu left the documentary and began chasing this new vision, a process he describes as like working a jigsaw puzzle.

“I made the film practically without a script, working directly through animatics, based on sensations I had, which I would then transform into story fragments,” he says. “I then tried to connect these fragments in search of some greater meaning. In this manner, I began discovering characters and their connections.”

A key element Boy & the World retained from Canto Latino was a political point of view. “I think that this spirit of protest permeated the making of Boy & the World up until a certain point, and then the story began to take on a more universal aspect,” says Abreu. “But it’s a story of the oppressed. A boy looks for his father in a globalized world, which drags people along like objects. This child could be from any country in the world where poverty is endemic.”

Abreu says 90 percent of the animation was done at his small studio in Sao Paulo, Brazil, with Abreu animating the film and designing the backgrounds on the computer. Designs were later printed on sheets of paper and redrawn on an animation table “to achieve all of the infinity of textures we have in the film,” he says.

“We always strived to imagine that we were not in front of the computer screen but rather in front of a sheet of paper,” Abreu says. “This organic texture is fundamental to this film, which, above all deals with humans beings.”

Abreu worked with three small teams — each at different moments — of producers and animation assistant. Assistant director and artistic coordinator Priscilla Kellen was the only person besides Abreu to work from start to finish on the movie, which took four years to complete — one year for the animatic and three for animation.

The free-form work process made it possible to do the film without dialogue (the few words spoken in the film are in an invented language that is essentially Portuguese spoken backward).

The bold political statements of the film have had the biggest impact on the film’s growing popularity.

“The film is also a political act in itself,” Abreu says. “It uses the voice of animation to scream at market forces which attempt to standardize everything in search for profits at all cost, some times at the cost of art itself.”