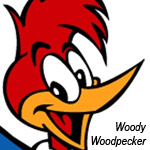 John Altschuler and Dave Krinsky have been tapped by Illumination chief Chris Meledandri and Universal Studios to write a script for the proposed feature, reports Deadline.com.

The pair have extensive animation and comedy credits, including long runs on the TV series Beavis and Butt-head and King of the Hill. In features, they scripted the live-action Blades of Glory, which starred Will Ferrell and Jon Heder as competitive figure skaters.

The Woody Woodpecker character has been dormant since the 2002 end of The New Woody Woodpecker Show on Fox Kids. The character dates back to 1940 and was created by Walter Lantz, Ben Hardaway and Alex Lovy; and originally voiced by Mel Blanc.

Woody Woodpecker joins a slate at Illumination that includes the sequel Despicable Me 2, due out next year; and in-development projects that include The Addams Family, Curious George, The Cat in the Hat and a biopic of Dr. Seuss.