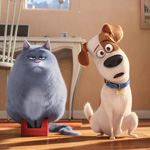 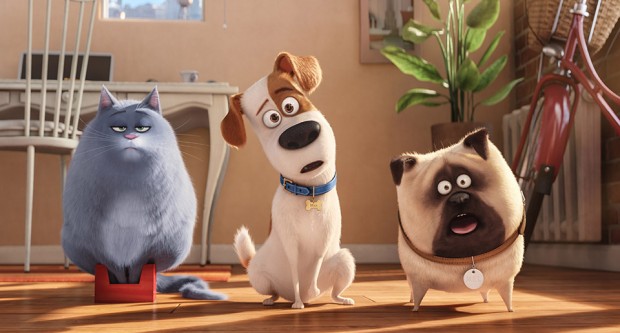 The studio mixes stylization and animal reality in its comedic exploration of The Secret Life of Pets.

The Secret Life of Pets is as high-concept a movie as they come, pitched by Illumination Entertainment CEO Chris Meledandri to director Chris Renaud over breakfast as a simple: What do pets do all day while people are at work?

Echoes of Toy Story aside, the idea is a simple one that could have gone in a thousand different directions, says Renaud, an Illumination veteran who previously directed with Pierre Coffin both Despicable Me films with as well as the Dr. Seuss adaptation The Lorax.

“It was an exciting opportunity to really play with animals as they are versus an idealized version of them,” says Renaud of the movie, which arrives in theaters July 8 courtesy of Universal Pictures. “Eventually, we came to an idea that we felt was very relatable and anyone who has had a pet and then they bring another animal into the home, which can be a very traumatic event, not just for the animals, but for the owners.”

So it is that New York dweller Katie (Ellie Kemper) brings home a big hairy mutt named Duke, much to the surprise of her devoted Jack Russell terrier Max. Their conflict gets out of control when they’re captured by animal control and then liberated by a group of lost pets who live in the sewers under the leadership of the anti-owner bunny Snowball, kicking off a search for the meaning of home.

Renaud says the story offered a chance to evoke his own love for and memories of pets, from dogs and cats to more unusual choices.

“We wanted guinea pigs, lizards, bunnies, birds — everything,” he says. “And so as a result it was OK, how can we use all those different pets, those different animals in our story. The idea of Snowball leading a gang of lost pets gave us an opportunity to play with other types of animals.”

For the animation, the key question was how much to bend reality — should the pets move like real animals or should they be anthropomorphized to walk upright or use paws as hands?

Renaud says they decided against anthropomorphism — with a few exceptions. “If a dog is going to get a set of keys off a table top, he’s not going to do it with his paw,” he says. “He’ll try to get his mouth up there and grab it with his teeth.”

Animation directors Julien Soret and Jonathan del Val say they filmed a lot of reference of real pets to study during animation. “It was really about starting with the animal’s point of view,” says Soret. “A cat had to move like a cat.”

On top of that, each of the pet characters has a human personality that needs to come through with the performance. The mix was sometimes a challenge to balance, as it was with the movie’s protagonist, a Jack Russell terrier named Max, voiced by Louis C.K.

Del Val says they needed to communicate the energetic, focused qualities of that breed with the dry sarcasm of the voice performance. “We were playing a lot of his thinking and his intelligence more than the physicality,” he says.

Other characters push those limits, such as Snowball, who leads the sewer-dwelling group called Flushed Pets, voiced by comic Kevin Hart. A more cartoony approach was used to draw out the contrast between Snowball’s fluffy exterior and the frenetic, angry energy of his dialog.

“When Snowball is moving, he always looks like a rabbit,” says Soret. “But when he’s starting to act you can really feel the anger in his body and in his mind.”

“I think on that character we gave ourselves a pass because he’s such a big performance, particularly as driven by Kevin’s voice,” says Renaud. “He’s up on two legs so he’s a little more human in his actions than anyone else.”

Another tricky character was the thick-coated mutt Duke, voiced by Modern Family star Eric Stonestreet. “He’s pleasing to see on the screen but if you look at the structure, he doesn’t really look like a dog,” says del Val. “Animating him was when he was doing action scenes was a bit tricky because of that … but at the end visually you don’t really notice that because of all the hair.” Duke was animated with a volume around him indicating where the hair would be, but the hair itself was handle by the hair and cloth simulation team instead of animation.

The animation crew peaked at about 70 people, Soret says, all of them working at Mac Guff in Paris. The movie took a year and a half for animation, which the studio wanted to at least equal its previous efforts in terms of quality.

Autumn in the City

Designing a look for the movie fell to production designer Eric Guillon, an Illumination veteran of the Despicable Me franchise. “The movie has a range of stylization, like Duke is a bit more stylized and the crocodiles are more stylized, but characters like Buddy and Mel are more like the breeds of dogs that they are,” says Renaud. “There’s tremendous power in creating characters that are recognizable breeds because I can’t tell you how many times I meet someone who has a dachshund and says oh I love that dachshund, (bit in the trailer) and they love it because they have one.”

The environment was inspired by the work of Jean-Jaqcues Sempe, an artist famous for his covers and cartoons for The New Yorker magazine.

“Those walls of windows, almost like a curtain effect, that Sempe would do in his work, with little characters off in the corner, felt like a great way to reinforce this very vertically integrated city and the shift in scale between this huge city and these little animals walking through it,” says Renaud. The film was set in autumn to play with the bright colors of changing leaves, with the city given a bit of an alabaster glow to add to its appeal, he says.

Several characters also play with the mixture of simplicity and cuteness that defines such distinctive franchises as Pokemon. “A great example is Gidget (voiced by Jenny Slate), who essentially looks like a cotton ball with eyes,” says Renaud. “It’s cute but powerful at the same time.”

All comedies rely on pacing, and Pets revs it up at times to high levels. Renaud says much of that is that he loves things that move, but also because a quick pace lets you get away with some things in a story like this one.

“We’re talking about these animals and they move in secret, but meanwhile they’re completely out in the open, so the longer that you highlight that, the more problems you cause yourself potentially,” he says. “Hopefully, fast pacing can help you overcome some rule breaking.”