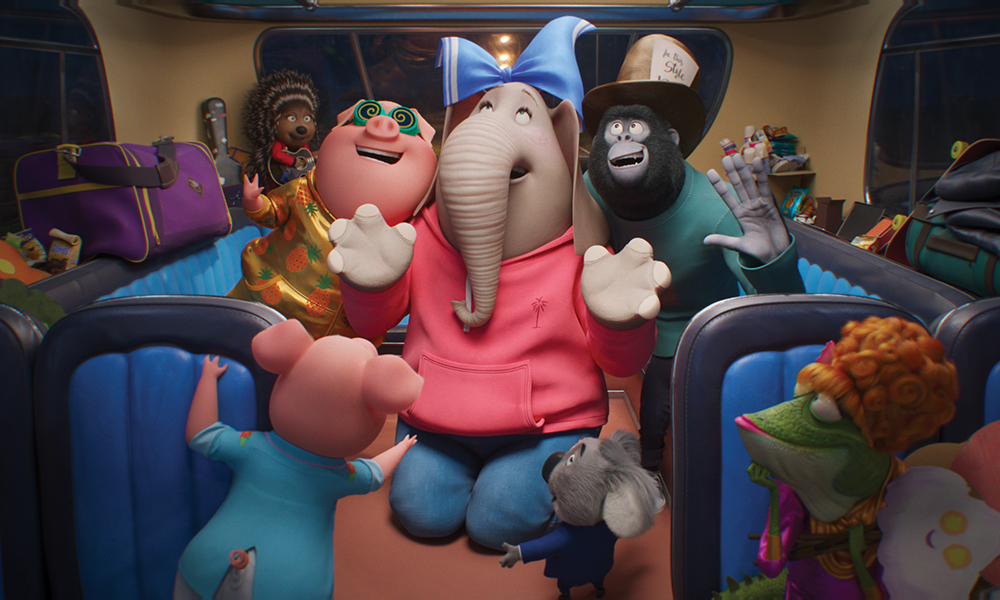 Buster Moon, you and your band of farm/zoo animals scored one of the biggest movie blockbusters of 2016! What are you going to do next?

No, they’re not going there … instead they’re going to Las Vegas; at least a metaphorical version of it. And rather than gambling the half-billion-plus they made from their debut effort Sing, five years ago, this time around the multi-species vocalists are gambling on their careers, their futures, their families, their self-esteem … even their lives. 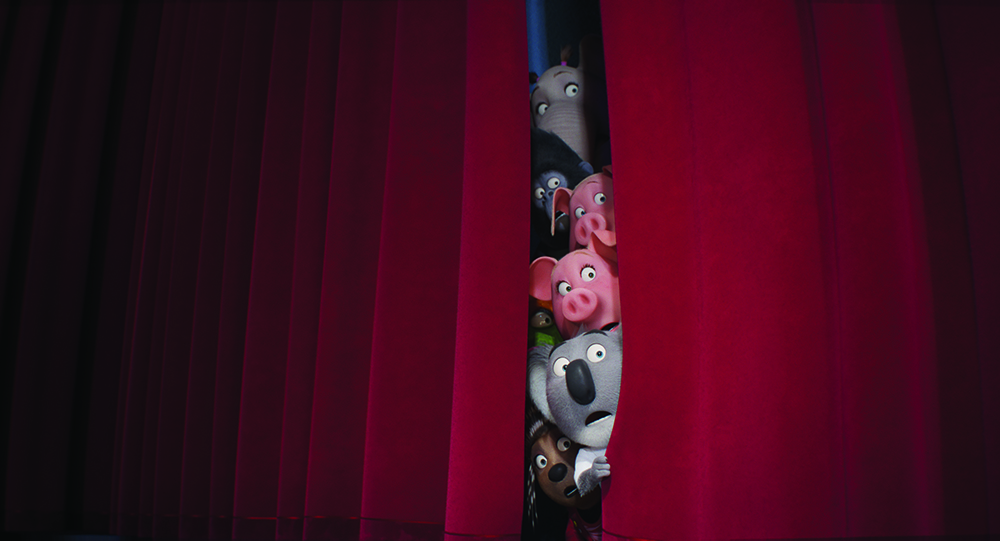 Universal Pictures’ and Illumination Entertainment’s Sing 2 finds plucky go-getter koala Buster (voiced by Matthew McConaughey) determined to push his musical menagerie beyond the confines of their theater in Calatonia to the big time of “Redshore City.” The problem is that Mickey and Judy made it look a lot easier. While Buster thinks everyone is ready, a talent scout from lupine hotel magnate Jimmy Crystal (Bobby Cannavale) does not, forcing Buster and his group — Rosita, a pig, voiced again by Reese Witherspoon; Johnny, a soulful gorilla (Taron Egerton); Ash, a porcupine (Scarlett Johansson); Meena, a belter elephant (Tori Kelly); and Gunter, a pig-of-all-trades (Nick Kroll) — to crash the audition for the show. Crystal (a soprano … as in Tony Soprano) is not amused until Buster bluffs his way into acceptance by claiming that his act will include legendary rocker Clay Calloway.

What follows is a perilous comedy of errors as the small-town team attempts to pull a massive production out of thin air while trying to find Calloway, who is now an embittered, reclusive widower, and convince him against all odds to join the band. 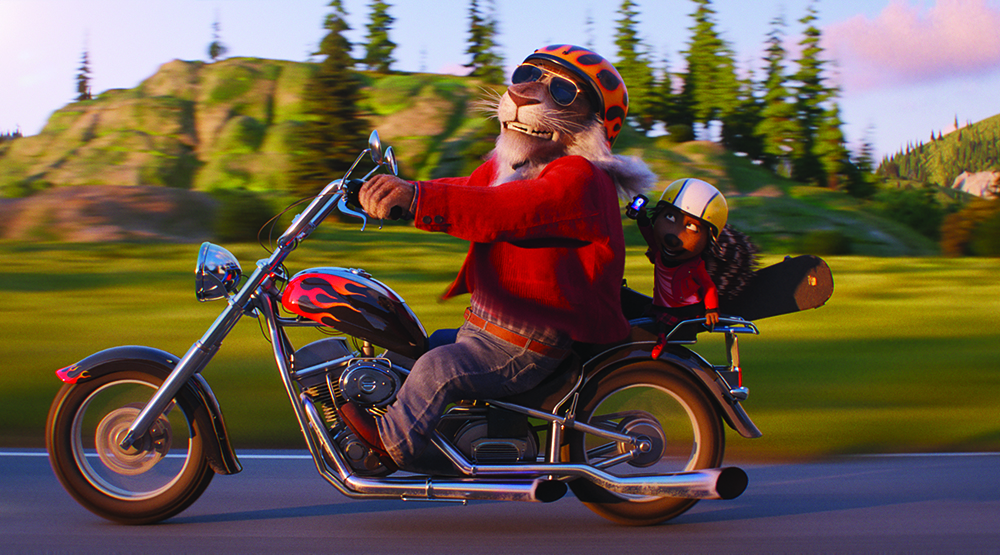 Clay Calloway is voiced by music icon Bono in Sing 2

The goal of just about any animated film is to appeal to the widest possible audience, and Sing 2 is a great example of a genuine family film, though writer/director Garth Jennings, who also helmed Sing, insists there is no formula for that. “It’s not like we have a criteria or a list of dos and don’ts,” he states. “It’s more of an unconscious thing, the collective sensibility in all of us.”

Adds Illumination founder and CEO Chris Meledandri, who produced the film with Janet Healy: “We approach every film very differently, but I think the one similarity is that we’re never making the film for an audience other than ourselves. We believe that we’re representative as a collective of an audience, and given the international makeup of our team, we’re representative of a global audience.” Animation production for Sing 2 was handled entirely by the company’s Paris, France-based studio Illumination Mac Guff. 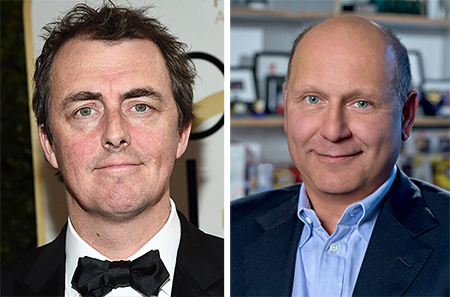 Part of the reach to a multi-generational audience is the music. As was the case with its predecessor, Sing 2 is dominated by song: classic tunes, new tunes, original recordings and covers by the singing cast members. Represented in the vast soundtrack are the works of Billie Eilish, Alicia Keys, Shawn Mendes, Elton John, BTS and scores (pun intended) of others.

“You can hear Billie Eilish when they’re breaking into a building, but you can also have a two-and-a-half minute bus ride with Mercury Red, which I’m pretty sure none of our children would know,” says Jennings (who also voices Buster’s formidable reptilian assistant, Miss Crawly). “But I loved seeing on the first movie how kids were completely open to something they’d never heard before because of the context in which it was presented.” The music of U2 is also featured prominently, with three classic numbers plus an original written specifically for the film, which was part of the package upon securing the vocal talents of Bono for the character of Clay Calloway, a lion. 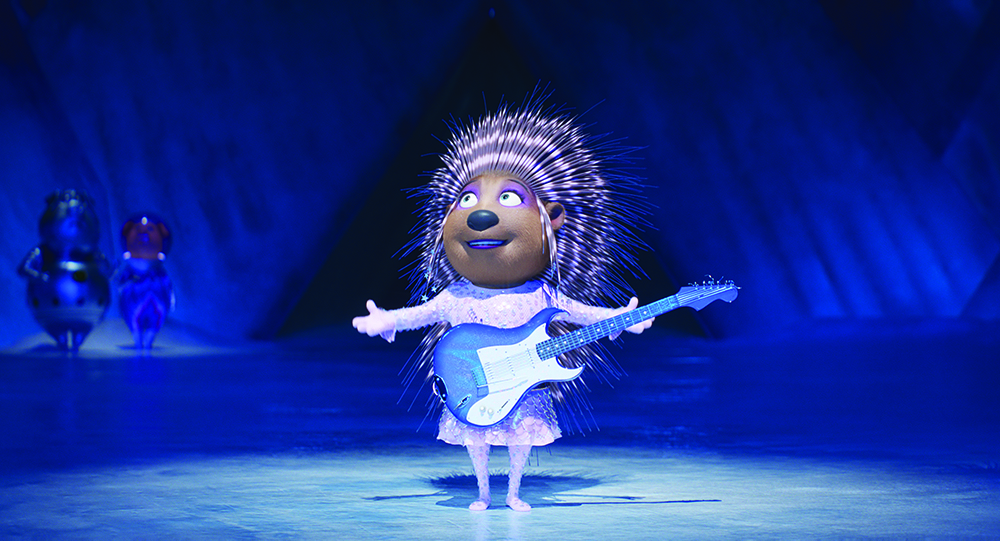 Most amazingly, though, is that the filmmakers got every song they wanted. As Meledandri, who is best known for producing such blockbusters as Ice Age, Despicable Me, Minions, The Lorax, The Secret Life of Pets and The Grinch, notes, “One of the collaborators on this movie is Mike Knobloch, who is president of music for Universal, on the film side. He and his team actually came in and partnered with us in overseeing the music. I marvel at how they could possibly be working on any movie other than ours, because the work entailed clearing songs, recording songs, producing songs and working with all of our actors who are signing their songs.” The task of producing the songs fell to Harvey Mason, Jr., while the orchestral score was composed by Joby Talbot.

Some characters from the first film are not reprised here, not so much because of actor availability issues, according to Jennings, as “there just wasn’t enough space for everybody.” A variety of new characters appear, most notably Porsha Crystal, the hotel owner’s insecure daughter (voiced by singer/songwriter Halsey); Nooshy, a lynx street performer who teaches gorilla Johnny how to bust a move (Letitia Wright); Alfonso, an elephant ice cream vender (Pharrell Williams), who becomes a love interest for Meena; and Darius, an hilariously egomaniacal yak performer (Eric André). 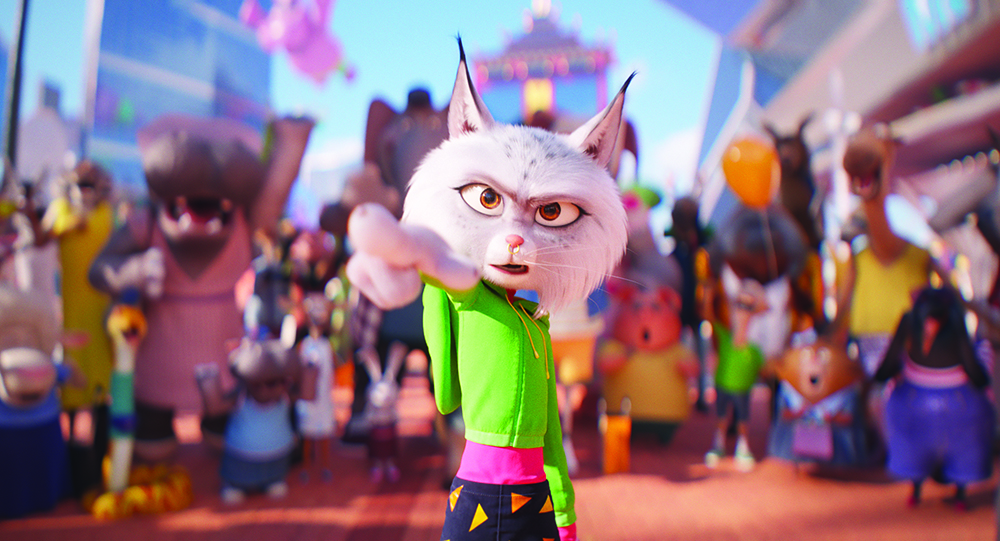 Letitia Wright joins the cast as Nooshy in Sing 2

And of course, there is Clay Calloway, whose leonine face reflects a panoply of emotions, thanks to animator Rudi Loial. “One shot of Clay is about the audience understanding how conflicted he is and doing that through performance rather than a line,” Jennings says. “Having gotten to know the animators, I knew their particular strengths, and I knew Rudi would be perfect for this. It’s wonderful to have an incredibly nuanced performance from a lion. I get quite emotional when I see the work come back and see that they’ve understood everything that we tried to do.”

Echoes Meledandri: “The directors of animation on the film, Patrick Delage and Pierre Leduc, are quite brilliant, and we have extraordinary directing animators working at Illumination Mac Guff. Some of the performances you see in this movie are allowing them to really show what they’re capable of, especially working with Garth, who had gone to art school and who draws and can express his ideas visually as well as with words.” 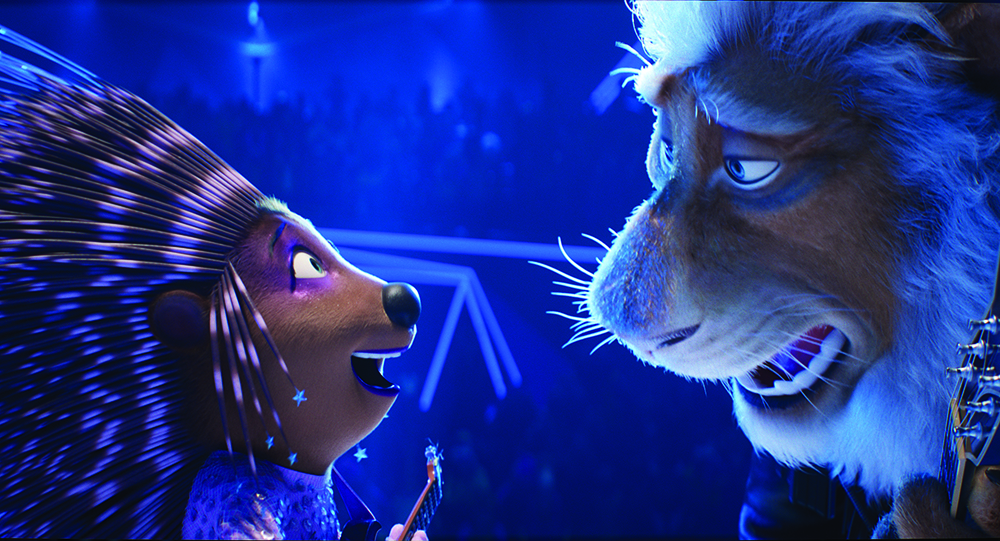 Redshore City itself is also something of a character in the movie: a huge, brightly-colored, teeming metropolis based in spirit on the Vegas strip. “I’d never been to Vegas,” Jennings confesses, “and I was rather naïve and said, ‘Oh, I know what Vegas is, I’ve seen it in so many movies.’ But Chris told me, ‘You have to go there.’”

Jennings and executive producer Dana Krupinski made a location scouting trip that included a lesson about the sheer scale of the place. “It blew my mind,” the director states. “One of the reasons I went was to look at the shows and Dana said, ‘The show starts at 7, so we need to be downstairs at 6:30, because it will take 20 minutes to walk from the elevator to the theater.’” 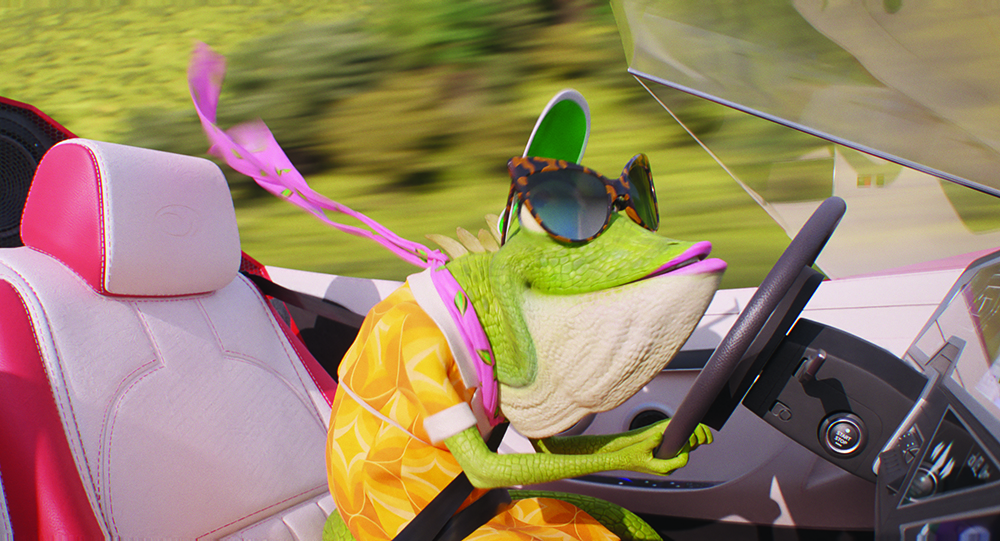 Jennings strove to capture the scope of the theater itself for the film’s grand finale, a musical journey through space, as well as the vistas from the room. “You go up to the top of the hotel and look out and there’s the desert and the mountains, and it’s overwhelming to somebody who comes from a small town in England,” he says, “a town smaller than the footprint of the hotel I stayed in! I tried to capture as much of that feeling as I could.”

The verisimilitude of a scene, rather than the minute detail of it, also extended to shots of the theater audience for the climatic set piece. “It was a massive amount of work by the crowd team,” Jennings relates. “You’ve got a lot of animals on stage and fire and who knows what else, and then you turn the thing around and you’ve got 10,000 animals in the audience! And the temptation is to light everything, but if you hold back on that it becomes even more powerful and realistic. You feel it rather than see everything explicitly.” 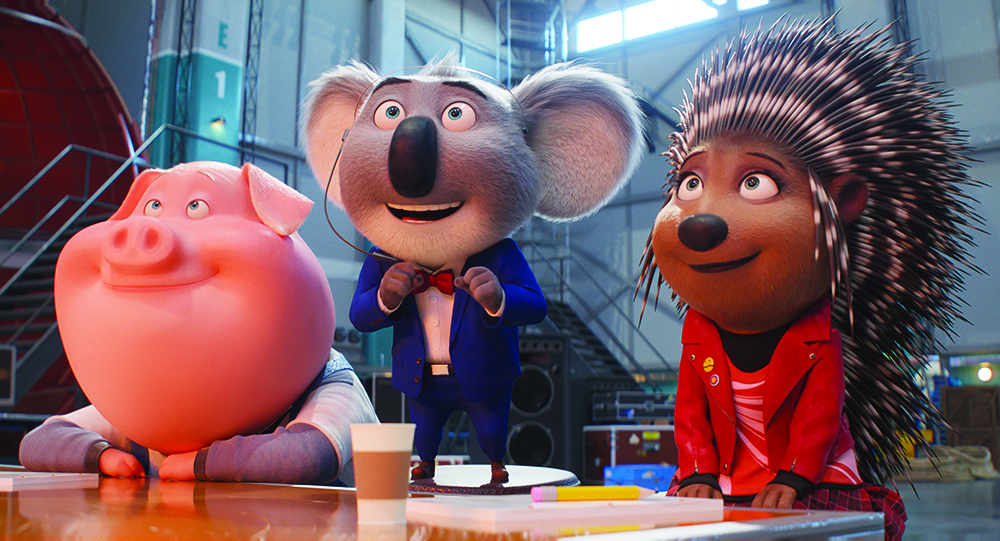 Character designer Eric Guillon was responsible for coming up with a seemingly endless supply of new animal characters, including an officious, proboscis monkey choreographer and a Minionesque army of mouse lemur janitors.

One animal connected with Sing 2, as well as every other movie of the past two years, was the (non-singing) elephant in the room: COVID-19. Jennings was based in Paris throughout the production, but initially jetted back to L.A. for meetings. Such back-and-forth travel was effectively hindered by the virus. Still, he says only about three weeks of production time were lost, thanks to “the IT team turning into commandos. They enabled hundreds of our crew with systems at home, and that is much easier said than done.” 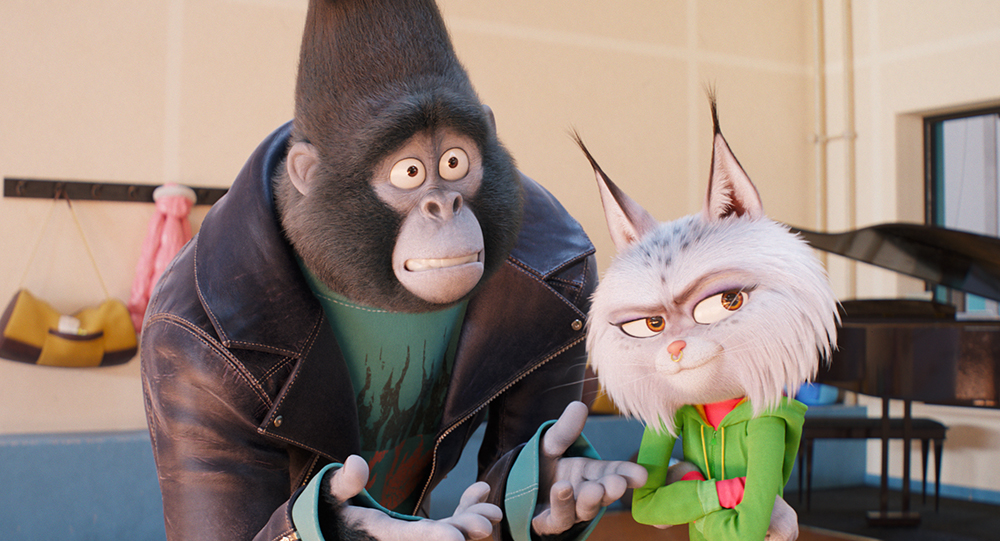 “Our senior management team did an incredible job of being really nimble and innovative, and really retooling parts of our pipeline so that we could operate effectively and efficiently with a remote crew,” adds Meledandri.

Given its hugely successful partnership with Illumination, is Universal now looking at a trio of Sing films? “We have a marvelous idea,” Jennings says, “but if there is [a Sing 3], I won’t be doing it. This is not due to a lack of love or anything like that, but I’m moving on after this and someone else will drive that marvelous cast of animals.”

Anyone got Noah’s number?

Sing 2 opens in theaters on December 22 through Universal Pictures.