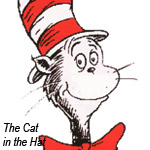 The animation studio behind the hit movie The Lorax is returning to the Dr. Seuss library, this time for a 3D CG-animated feature based on The Cat in the Hat.

According to Deadline.com, Universal-based Illumination Entertainment has started developing the pic and tapped Rob Lieber to write the script. Illumination president Chris Meledandri and Seuss’ widow Audrey Giesel will be exec producers.

The move is reported as a bit of a surprise, given a live-action Cat in the Hat feature starring Mike Myers flopped in 2003, grossing $133 million worldwide on an estimated budget of $109 million.

But the site reports that the studio thinks that, despite a successful live-action of How the Grinch Stole Christmas, that the famous children’s author’s work is best-suited to animation. The current success of The Lorax, which has grossed $132 million as it enters its third weekend of release, as well as 2008’s Horton Hears a Who, which Blue Sky made and released in 2008 to earn just under $300 million worldwide, would seem to back that up.

The site also reports that Illumination is working on a Dr. Seuss biopic that will mix live-action and animation, with Johnny Depp lined up to play the author.

You may also like...
Related Topics:Animation, Audrey Geisel, Chris Meledandri, Dr. Seuss, Horton Hears a Who!, How the Grinch Stole Christmas, Illumination Entertainment, Johnny Depp, Rob Lieber, The Cat in the Hat, The Lorax, Universal Studios