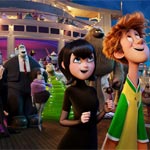 In 2015, after captaining two entries in Sony Pictures Animation’s monster franchise Hotel Transylvania, animation maestro Genndy Tartakovsky was ready to abandon ship when talks of a three-quel came up.

“I was done with the franchise,” Tartakovsky says. “I walked away from it.” All that changed with a surprise gift from his in-laws: a cruise for him and his wife. “We got on the boat, and it’s like a floating hotel, and you’re trapped — and all of a sudden, everything came together.” Having realized that gags about running a ghoulish hotel would be easily translatable to an oceanic resort, Tartakovsky pitched Sony on the idea of sending the Drac Pack seaward for a little R&R. Hotel Transylvania 3: Summer Vacation was greenlit in 2016 … and yes, that did create a short production window, especially given the film’s release date was bumped up from September to July.

But the challenges were met, and Hotel Transylvania 3: Summer Vacation once more demonstrates director Tartakovsky’s signature blend of old-style, gag-based cartooning done via high-tech CG animation. “Because I was able to write the script with Mike McCullers, we were able to put in sequences for animation which feature that style,” he says. “The first couple [movies] had more talking. Now, we have five sequences with no dialogue and there’s a lot more physicality. It’s definitely an animator’s movie.”

There are a slate of new characters as well, including the ancient, accident-prone vampire-hunter Abraham Van Helsing (voiced by Jim Gaffigan); bubbly Ericka (Kathryn Hahn), the ship’s captain and cruise director, and love interest for Dracula; a deadpan fish crew drolly led by Stan the Fishman (Chris Parnell); and Tinkles, a monster-sized pug dog first introduced in the 2017 short Puppy!, who is the pet of Drac’s growing grandson. That’s a lot of characters to fit into the proceedings, and that was even before Tinkles started to steal the show.

“In the original version, Tinkles was in the intro, and then he was a little button at the end,” says senior animation supervisor Alan Hawkins. “He was left behind at the hotel and destroyed everything while everyone was gone. But every time there was a screening, he was so well-liked that they kept adding more and more jokes.”

This meant that additional bits with Tinkles had to be retrofitted into already completed sequences, chiefly those involving a rickety airplane staffed by gremlins, and those on the cruise ship itself. Already a challenging rig, given his puggy eyeball-to-eyeball grin, the problems increased exponentially when the stowaway pooch is seen wearing a trench coat disguise. “The gag of the jacket was added as a one-shot thing, and I should know by now that nothing is one shot,” Hawkins says. “We did a band-aid solution for adding the jacket, but more and more shots started popping up. Shots where he’s scrambling around wearing the jacket were really animation-intensive.”

Hawkins’ unusually large team of 135 animators also found the character of Ericka challenging. “Genndy was very keen on her being a physical match for Dracula, meaning that she is as broad as he is,” he says. “Erica can’t fly, but she does crazy flips and jumps.”

That very cartooniness creates demands on the entire method of digital animation, Hawkins says. “All animators on the Hotel Transylvania films are essentially modelers, because every pose to varying degrees is sculpted exactly for that camera angle,” he states. “It’s absolutely the opposite of what a lot of CG animation is, which forces you to stay on model, be consistent, and don’t break the rig. Our thread of consistency is Genndy’s imagination. It’s a lot of extra work that the computer doesn’t want to do by default, but animators comes out much stronger than they came in, because Genndy sees things in a different way than a lot of younger animators do.”

Sony Pictures Imageworks’ Mike Ford, the film’s visual effects supervisor, similarly had to find ways of coercing the computer into acquiescing to Tartakovsky’s vision. “The way Genndy moves the characters had the effects artists scared,” Ford admits. “You’re not using normal gravity. You have these forces that are being applied that don’t work inside the computer, so you have to trick it in order for the simulations to do what you want.”

Ford estimates that some 75 percent of the film’s shots have effects; from easy ones, such as stock fireworks, to enormously difficult ones, such as the interaction of a skyscraper-sized, tentacled kraken with both water and solid scenery. “The kraken’s moving at a speed where real-world physics do not apply,” he notes. “A lot of times we’re compromising physics and making something that aesthetically looks like it matches what’s being done in performance.”

Then, of course, there is the water itself, of which there is a lot in Summer Vacation. Ford says his biggest vfx priority on the film was getting the water to look convincing around the highly stylized figures. For scenes set in a swimming pool, the task was to force the computer into not revealing reflections, which is a no-no for any vampire movie. “We use a physically-based renderer [“Arnold,” developed through Solid Angle] which gives you the accurate representation of a reflection, if it’s a reflective surface,” says Ford. “So we had to take out Dracula’s reflections and add a little bit of occlusion, or depth cutting, to make it feel like he was in the water. ”

Reflective water wasn’t the only hurdle for the vamp characters. There was also depicting a sun-and-fun vacation without the sun. “Nothing’s during the day, the whole thing’s at night,” explains production designer Scott Wills, who has art directed such TV shows as Samurai Jack and Star Wars: Clone Wars as well as features Monsters vs. Aliens and Flushed Away. “It is a big pain because how many different colored nights can you do? You do a green night, a blue night, a red night … if you watch the movie, there’s every color of night it’s possible to do, because it needs to be really bright and happy, and feel like day.”

Adds Ford: “What Scott and Genndy really wanted to do on this film was push more color into the movie, which doesn’t necessarily mean detail, it means you want to push all the feeling for this scene based on pushing the colors in that direction.”

Another design challenge for Wills was ensuring that the new settings, which include a comically tiny desert island and an underwater volcano, did not look, in his words, “cheap or silly.” Says Wills: “The giant boat with a tiny island is such a cartoony idea, and that combination of realistic CG with completely cartoony ideas really fight each other.”

Costing an estimated $65 million, Hotel Transylvania 3: Summer Vacation actually could be called cheap, as least when compared to its predecessors. And Tartakovsky happily cops to the silly designation. “It’s definitely different from the first two,” he says. “There’s so much visual fun in it, because it has this action element with the silliness. Expect the unexpected.” 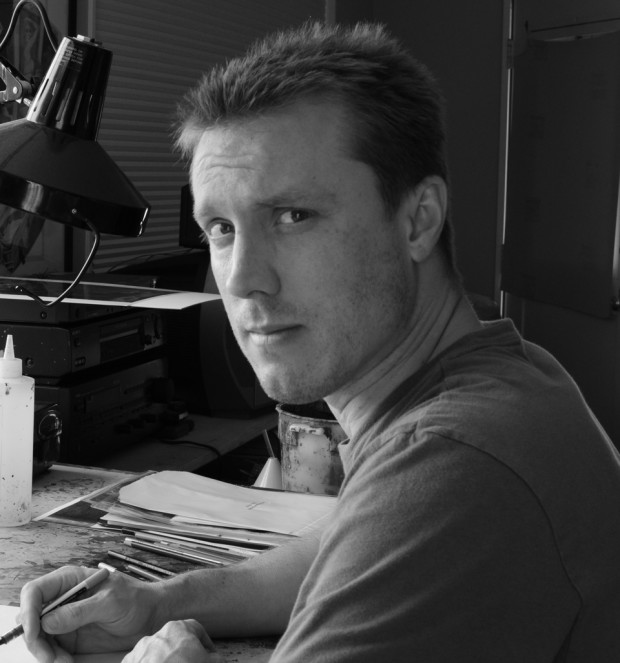 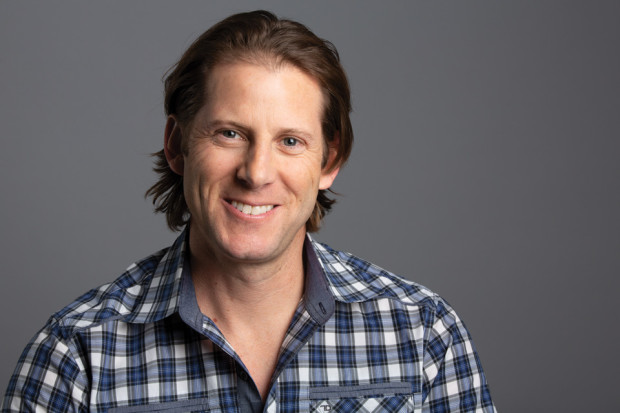 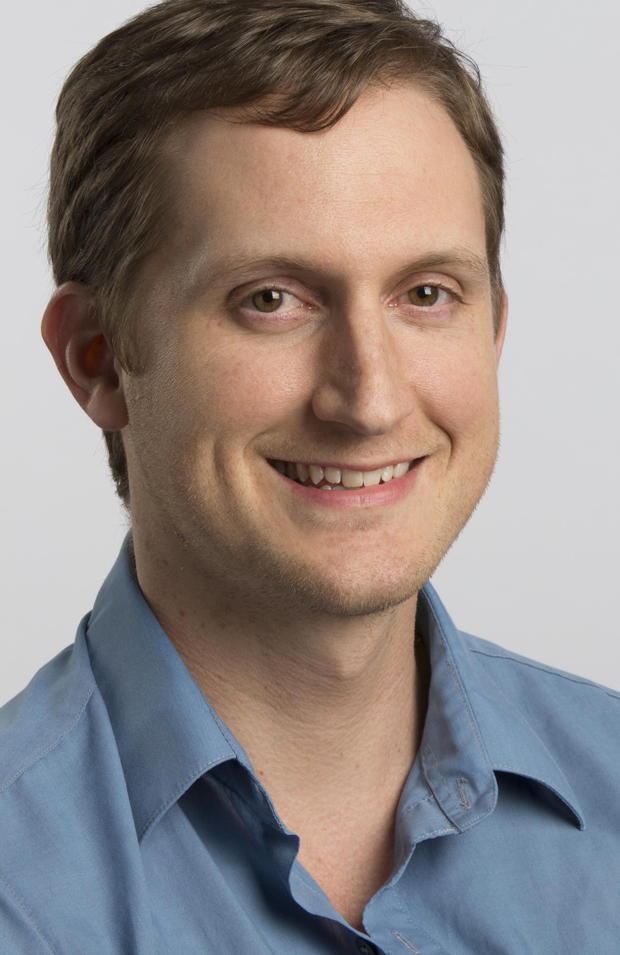 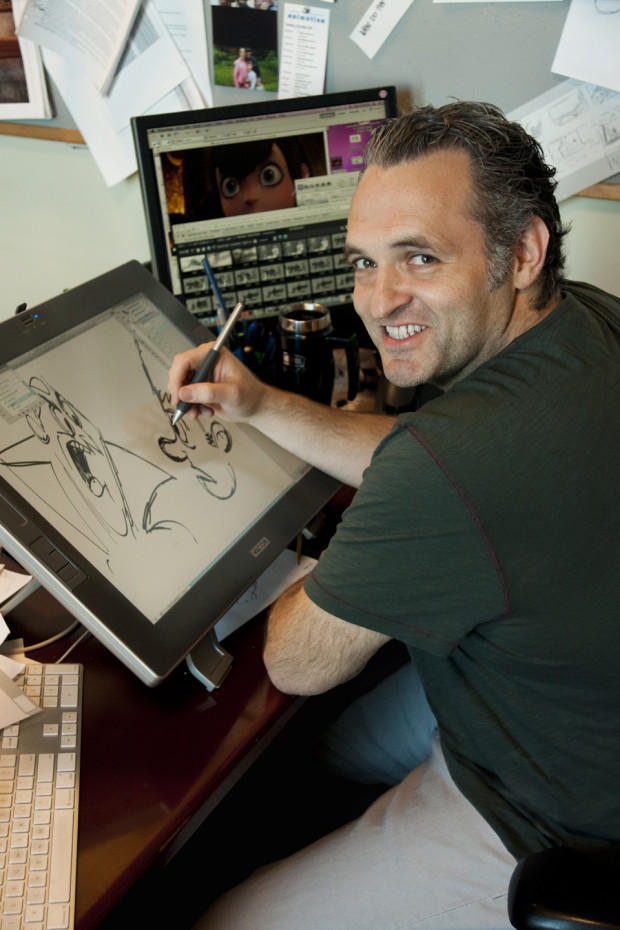 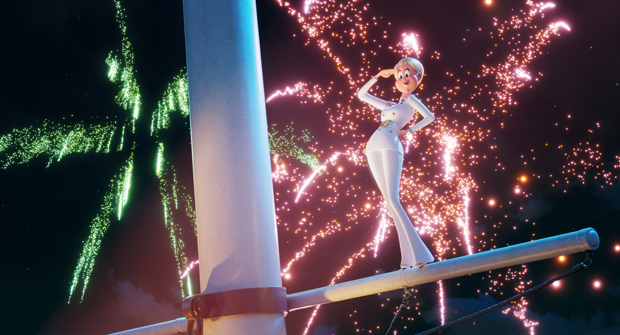 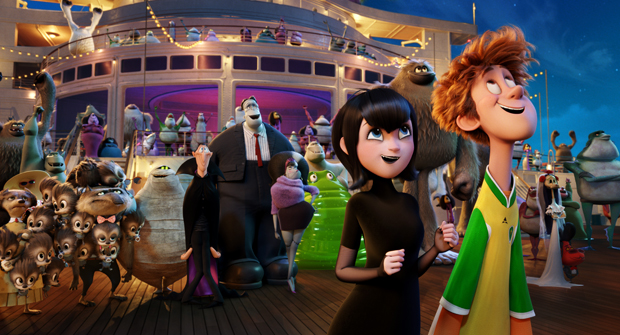 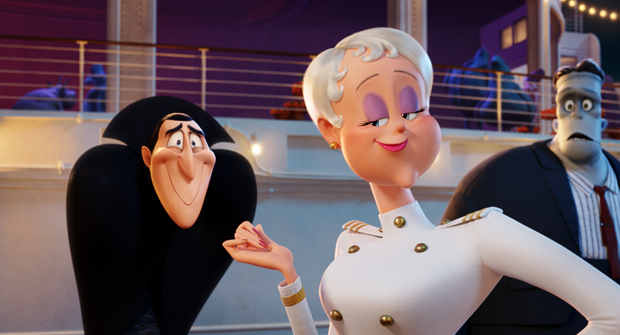 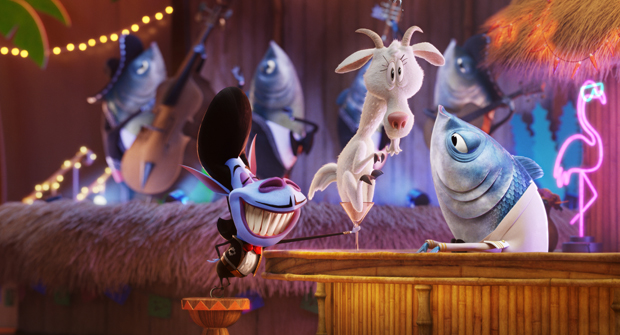 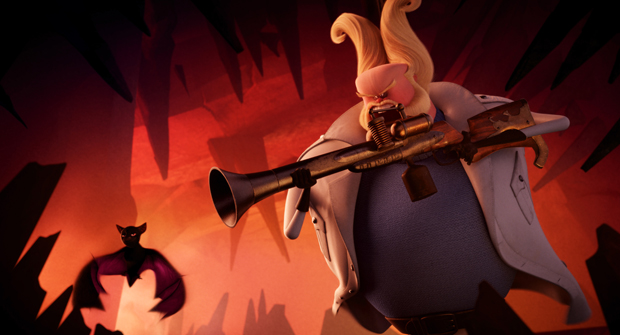 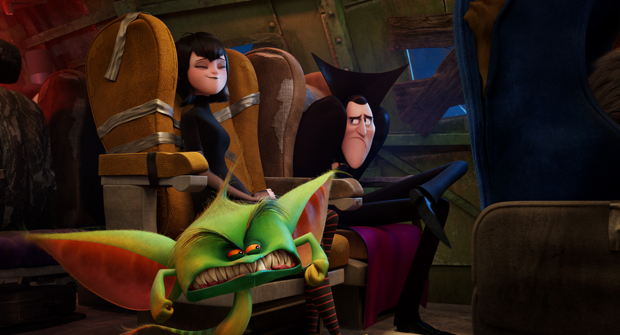 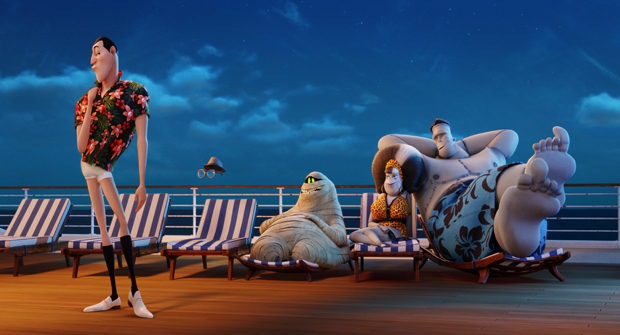