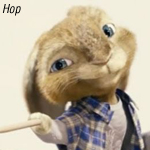 Hop put some bounce in the box office, handily winning an otherwise weak weekend for movies.

The second film from the Universal-affliliated Illumination Entertainment grossed an estimated $38 million, easily exceeding expectations for an opening in the mid-20s. Hop — a hybrid film featuring both live-action and CG-animated characters — grossed $7 million in a handful of day-and-date international openings, for a solid worldwide debut of about $45 million.

The high-tech thriller Source Code came in a distant second with a $15 million opening. Third place fell to another new film, the horror pic Insidious, which earned an estimated $13.5 million.

Among holdovers, the VFX-heavy action fantasy film Sucker Punch earned an estimated $6 million in its second weekend of release. That brings the Zack Snyder movie to a domestic total of $29 million and a worldwide tally of $36 million. Faring much better is the animated feature Rango, which earned $4.5 million in its fifth weekend out, bringing its domestic total to $113 million and its worldwide tally to $208 million.

Also still in release is Gnomeo and Juliet, which earned an estimated $432,000 for a domestic total of $96.9 million. The film has sold about $70 million worth of tickets overseas for a total box office gross of $167 million. Disney’s Mars Needs Moms earned about $330,000 domestic for a total of $20.4 million. Overseas ticket sales for the film add $14 million to that total.

Overall, box office was down again this weekend by about 30 percent over the same weekend last year, when Clash of the Titans was among the openers.

Next major animated release is the Fox-Blue Sky Studios release Rio, due out April 15.