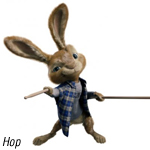 The film, which mixes live action and CG animation, is set to open in an estimated 3,400 theaters. The film is directed by Tim Hill and features CG animation by Rhythm & Hues. It features the voice of Russell Brand as E.B., the son of the Easter Bunny, as well as Hugh Laurie and Hank Azaria. Playing live action roles are James Marsden and Kelly Cuoco.

Here’s the trailer for Hop:

Also opening this weekend are the horror film Insidious at about 2,400 theaters, the Summit Entertainment sci-fi thriller Source Code at about 2,800 cinemas, and the PG-13 rated version of this year’s Best Picture Oscar winner, The King’s Speech.