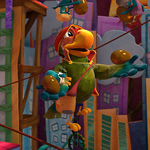 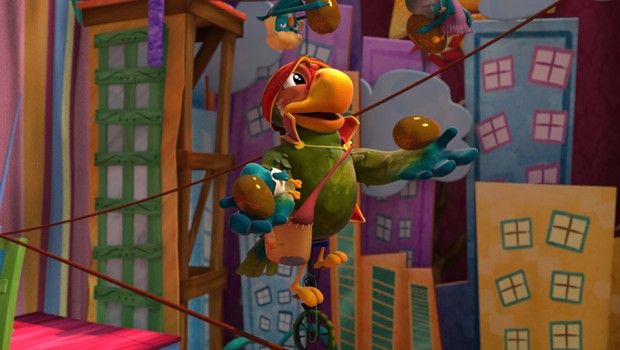 Animex steps up to show what Mexican animation can do with the CG feature El Americano.

Mexico has a long and rich history, a deep culture and a great love of animation. All of which made Ricardo Arnaiz wonder why his home nation produced so little original animation.

“For more than 30 years or so, there was no Mexican animated movie to come out,” says Arnaiz, who founded in 2000 Animex Studios in his hometown of Puebla. “So I decided to go try to make this happen. Let’s try to make Mexican movies like the Hayao Miyazaki movies that tell Japanese folklore and stories. Why not (do the same thing) with Mexico?”

That began a journey that has lead Arnaiz to co-write and co-direct the CG animated feature El Americano, due for a U.S. theatrical release in March. El Americano tells the tale of a young parrot named Cuco, whose family owns a circus in Puebla that is threatened by a group of bullying birds. He decides to seek help from El Americano, the star of his favorite American TV show, and heads north with his friends to convince the superhero to come to his family’s aid. When Cuco learns his hero is only an actor in a fantasy show, he learns he is the hero his family needs.

Arnaiz’s association with Roman, a legend in the animation industry as the founder of original The Simpsons animation studio Film Roman, goes back to his first animated feature, 2007’s La leyenda de la Nahuala.

Arnaiz reached out to Roman as a fellow Mexican-American for advice on the project, which Roman originally said was impossible to make with Arnaiz’s limited resources and ambitious schedule.

“Against all odds, we premiered the movie on time and we made it to the Morelia Film Festival, one of the most important here in Mexico, and we showed the movie and everybody was laughing,” says Arnaiz. “Phil later he wrote a letter saying, ‘You know, Ricardo, you have shown me that when Mexicans say they can do something, they can. They really can.’”

After Arnaiz’s film Nikte had the misfortune of opening in theaters in Mexico the same day as James Cameron’s Avatar, resulting in disappointing box office, he decided to seek out a co-production with an American partner for his next project, which began when producer Gerry Cardoso brought in the idea about birds that travel from Spain to Mexico.

“I said it would be great to make them go from Mexico to the United States, so we started from that,” Arnaiz says.

“We were very careful to be respectful of both countries,’” he says. “We wanted to tell a story about how borders are just a line on a map and when you are honest and you do things the right way there are a lot of possibilities out there for everybody.”

He was surprised to find a fan in Olmos, who had seen La leyenda de la Nahuala and signed on as both voice actor and executive producer of the project.

Animex had previously worked only in 2D animation and was just starting to explore CG animation when Olmos said the film had to be in CG and stereoscopic 3D to have the best chance of success.

With a budget of $4 million, Arnaiz found his way to Boxel Studios, a company founded by Andres Reyes Botello in Tijuana that primarily did computer animation for things like games and the medical industry.

Tapping into his personal contacts, Arnaiz brought in veteran director Raul Garcia as animation director and Kunkel, a personal friend he had long hoped to work with, and brought them down to Tijuana to make the movie.

“They taught everyone how to make animation, Hollywood style, and in Mexico, we taught the Americans how to do it with low budgets,” says Arnaiz.

It was hard work, Arnaiz admits. About 20 to 25 animators were working at Boxel in Tijuana, handling about 80 percent of the work, including lighting, shading, stereoscopy, layout and modeling. A partner studio in the Philippines — Cutting Edge Productions — helped out with animation and crowd scenes.

“The biggest challenge was to get it to the level that everyone was hoping for us,” says Arnaiz. “They thought at first that we were going to go to like a direct-to-video quality at the most, and once we showed them some clips they were really excited about it.”

The film was completed on schedule and on budget, Arnaiz says, taking about 14 to 16 months for the movie to go from pre-production to the start of rendering.

The movie will be released in both English and Spanish, with most of the voice cast — including Kudrow — playing their characters in both versions.

While a distributor for the United States and Mexico has not yet been officially announced, Arnaiz says the film will be independently distributed. The producers are raising the funds to promote the film to primarily Latino audiences in the U.S. with the assistance of ThinkLatino, an advertising and publicity company.

What impact El Americano will have on the animation market in the United States or Mexico is still to be seen, Arnaiz says he’s pleased to have contributed to the rising quality and prominence of Mexican animation and told a good story in the process.

“It’s a good message for Mexicans looking for the American dream and realizing that while they were looking out there, it’s inside them,” he says. “I think it’s a very good message for everybody.”