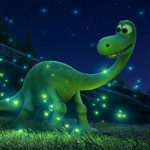 Environment plays a key role in a tale that puts a twist on the classic boy-and-his-dog premise in Pixar’s The Good Dinosaur.

The tragic loss of a parent. A long, treacherous journey home. An unlikely friendship. These are all elements of a classic Pixar tale and in The Good Dinosaur they’re brought together with some of the most compelling contemporary animation techniques.

The story asks a simple question: What if the asteroid that allegedly struck the earth and caused the extinction of the dinosaurs missed? What if dinosaurs evolved? Who would they be and who would we be? In Pixar’s answer to these questions, we follow a young dinosaur named Arlo.

Arlo’s journey takes him across some vast and genuinely gorgeous landscapes. The look was developed using both hard data and the special inspiration of key crewmembers. During a research trip to Wyoming for the film, director of photography-lighting Sharon Calahan spent hours painting the landscapes and trying to capture the particular natural light in the area. Later, director Pete Sohn and his team also used actual United States Geological Survey data of the northwestern U.S. to get what they call a “painterly realism” on the screen.

“The environment is really another character in the film,” Sohn says. “Arlo is fighting against it all the time to get home, stay safe or follow his journey.”

The enormous plains that Arlo crosses are also populated by large amounts of clouds that can be manipulated to create any look that the filmmakers wanted. The set team designed these clouds. Later Pixar’s artists finalized libraries of both cloud and rain types which could be used to make unique and specific skies. Additionally, the lighting team could contribute its secret sauce so that these clouds would then cast shadows and reflect light in any scene.

“The 3D volumetric clouds are part of what gives this environment its look,” says effects supervisor Jon Reisch. “They give it a real living and breathing sensibility.”

With this more realistic take on the environment, the decision was also made to create characters that were softer and less hard edged. Their more “cartoony” look became a contrast against the more faithful appearance of the world around them.

“We want to feel what Arlo’s feeling, and I think his appearance, his eyes, let you into what’s happening inside him,” Sohn says.

Elephants and Giraffes and Camels … Oh, My!

In order to create a convincing dinosaur after they finalized Arlo’s look, the animators had to come up with movement that felt real. It’s no easy task since there aren’t actual dinosaurs lumbering around to use as reference. So, the animation team started looking at elephants since they’re roughly the reference size of Arlo.

‘We want to feel what Arlo’s feeling, and I think his appearance, his eyes, let you into what’s happening inside him.’

They paid special attention to the gait of these large animals and how they moved their legs to accommodate their massive weight while still moving quickly over long distances. Animators also took to drawing with digital tools on top of footage of the elephants to study their pace.

Arlo also has an especially long neck and so it seems natural that the animation team would initially use giraffes as a starting point for reference. Though the giraffes certainly had a long, elegant appearance, they ultimately seemed too stiff and not nearly expressive enough to reflect Arlo’s emotions, and the team turned to camels for the way their necks moved.

It’s a Boy and His Dog Story … Sort Of

Along the way, Arlo befriends a human boy he names Spot. As you might think, Spot becomes Arlo’s companion and pet. And this pet boy doesn’t move like a boy at all. He’s got all the exuberance of a puppy, leaping with joy at his master’s commands and growling and gnashing his teeth to protect Arlo when he thinks danger is near.

So it makes perfect sense that Spot is a combination of prairie critters and predators – wolves, dogs and raccoons. All of these creatures influenced Spot’s visceral exploration of his world. He sniffs, scratches and howls his way through the film, clearly paying homage to all these influences.

The T. rexes in the film aren’t modeled on animals, on the other hand. Though the filmmakers made a pass at the time using movies like Jurassic Park and The Jungle Book for reference, they ultimately settled on the movement of a horse or a cowboy on horseback for this trio of hardened frontiersmen.

A Touch of Spielberg

While Arlo desperately searches for his way home, his battles against rivers and water become an epic spectacle throughout the film. When designing the rushing water that carries Arlo with it through a narrow canyon, Sohn came up with an unexpected reference for his team: Steven Spielberg’s legendary TV movie Duel.

Duel was shot on one small highway but used clever camerawork to keep the environment interesting. The movie also cut back and forth, carefully using slighting different perspectives to hide that it was shot in one small area. So the effects on The Good Dinosaur used a similar technique when they required more than 200 shots of running river. They fashioned about eight individual river pieces that could be fit together in a multitude of different ways in any scene of the film. Handled the right way, no one realizes they’re looking at the same river bits viewed in slightly different ways and rapidly cut together.

Sohn’s overall aim was to use the environment to push Arlo along his journey and give him the opportunities to grown. In that way the environments become Arlo’s adversary, his guide and even his comfort during more peaceful moments along the path home. Whether this young dinosaur is frightened or wildly courageous, the landscape is always changing in ways he – and the audience – could never predict. And that’s by the director’s design.

“We went on our own river rafting trip to get a sense of how powerful these rivers are and it was exciting and scary and made you feel alive,” says Sohn. “We wanted to give that feeling of being in the moment with all the things that happen to Arlo to the audience.”