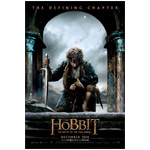 The first weekend of the new year was a good one for Bilbo Baggins, as The Hobbit: The Battle of the Five Armies topped the domestic box office with an estimated $22 million in ticket sales. That brings the final chapter in Peter Jackson’s prequel trilogy to an impressive domestic total of $221 million. Its $502 million foreign haul puts its worldwide gross at $772 million.

In fifth is Night at the Museum: Secret of the Tomb, another threequel, with $14.5 million in domestic ticket sales. The visual-effects-heavy comedy has earned $90 million total domestic and $91 million abroad for a $181 million worldwide gross.

The Hunger Games: Mockingjay — Part 1 was the No. 8 film for the weekend, with $7.7 million in domestic ticket sales. The film has grossed $323 million domestic and $372 million foreign for a $695 million worldwide total.

Disney’s Big Hero 6 finished in tenth place in the domestic market for the weekend with $4.8 million in ticket sales. The animated superhero pic has grossed $211 million domestic and $167 million foreign for $378 million worldwide.

And Christopher Nolan’s sci-fi epic Interstellar sold $2.4 million worth of tickets to bring its domestic gross to $183 million. With a $470 million gross from foreign markets, the movie has earned a total gross of $653 million.

You may also like...
Related Topics:Big Hero 6, Christopher Nolan, Disney, DreamWorks Animation, Interstellar, Into the Woods, Night at the Museum: Secret of the Tomb, Penguins of Madagascar, Peter Jackson, Rob Marshall, The Hobbit: The Battle of the Five Armies, The Hunger Games: Mockingjay Part 1